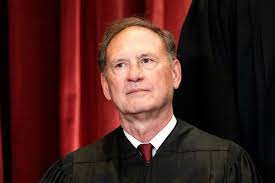 WASHINGTON – A Supreme Court official Monday pushed back on explosive allegations this month that a former anti-abortion advocate got a heads-up about the outcome of a 2014 decision dealing with religious objections to contraception.

A letter from the Supreme Court’s legal counsel, Ethan Torrey, reiterated an earlier denial from Associate Justice Samuel Alito that he told an intermediary about the outcome of the case and it stressed that “there is nothing to suggest that Justice Alito’s actions violated ethics standards.” The letter was a response to an inquiry from two prominent Democratic lawmakers after the New York Times published the allegations.

The two-page letter was a rare instance of the high court making its response to lawmakers public. It comes as the Supreme Court is apparently still investigating the leak of a draft opinion this year in a landmark abortion case that ultimately overturned the court’s Roe v. Wade decision. Alito wrote the majority opinion in that case.

In a story published by the New York Times this month, a former anti-abortion advocate said he had knowledge of the outcome of the court’s 2014 opinion in Burwell v. Hobby Lobby before the decision was released. The court decided in that case that for-profit companies may deny contraception coverage to employees based on religious objections.

The Rev. Rob Schenck alleges he was informed of the court’s decision by Gayle Wright, a donor to his evangelical nonprofit, Faith and Action. Wright, according to the Times, had told Schenck she would be dining with Alito and his wife and that she thought she could learn the status of the case.

Alito, at the time the story published, said in a statement that the “allegation that the Wrights were told the outcome of the decision in the Hobby Lobby case, or the authorship of the opinion of the court, by me or my wife, is completely false.” He added that he “never detected” any effort to sway his official or private actions, and if he had, he would have “strongly objected.”

A day after the New York Times story published, Sen. Sheldon Whitehouse, D-R.I., and Rep. Hank Johnson, D-Ga., who chair the respective subcommittees on federal courts in their chambers, wrote to Chief Justice John Roberts. The lawmakers pressed Roberts on whether an investigation had been opened into the allegations.

They also asked whether the court had “reevaluated any of its practices, procedures, or rules related to judicial ethics” or the rule surrounding how justices report gifts or in light of the allegations from Schenck.

In the court’s response Monday, Torrey noted that federal court rules ban judges from receiving a gift from a person with business before the court. In addition, Torrey said, the term “gift” excludes “social hospitality based on personal relationships as well as modest items, such as food and refreshments.”

In a joint statement, Whitehouse and Johnson said that “the Supreme Court reiterated Justice Alito’s denials but did not substantively answer any of our questions.” The court’s letter, the two Democrats said, “is an embodiment of the problems at the court around ethics issues.”