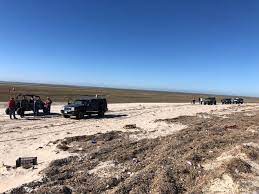 Abody was found during search operations for an Arizona couple who went missing after they went sea kayaking in Puerto Peñasco, Mexico – also known as Rocky Point – on Thanksgiving.

On Sunday around noon, after a search operation using air, land and sea resources, the local navy reported that the body of a woman matching the characteristics of one of the missing people was found near the Mayan Palace hotel, according to the Civil Protection and Firefighters in Puerto Peñasco.

The Puerto Peñasco government said in a statement on Saturday the couple went kayaking on Playa Encanto, a local beach about 11 miles away from the hotel.

The name of the couple hasn’t been released by authorities, but a GoFundMe identifies them as Corey Allen and Yeon-Su Kim. Allen’s sister identified the body that was found as Kim, the Civil Protection and Firefighters in Puerto Peñasco said in a statement around 4 p.m.

We appreciate the support of the volunteers who have come forward to help, in addition to private businesses and groups of U.S. residents who have provided support to continue the search efforts,” the Civil Protection and Firefighters in Puerto Peñasco said in a statement on Sunday.

Allen and Kim went kayaking with their daughter around 1 p.m. on Thursday, and when strong winds and currents appeared, Allen took his daughter back to shore. Allen then went back out to help Kim, and the couple or their kayaks hadn’t been seen since, according to the GoFundMe.

The Municipal Civil Protection Unit, the local navy and the Municipal Public Security have coordinated air, land and sea searches for the couple. Pivac Carrillo reinforced the search on Saturday, according to a Puerto Peñasco government statement.

Authorities have searched in areas near Playa Encanto, including Las Conchas, La Pinta and the Mayan Palace hotel complex. U.S. volunteers have also joined the search, some using private airplanes, with the “hope and firm intentions of having positive results as soon as possible” the statement says.

Alan Ontiveros, director of Municipal Civil Protection, said the couple’s daughter, who is a minor, was left under the protection of relatives who traveled to the city.