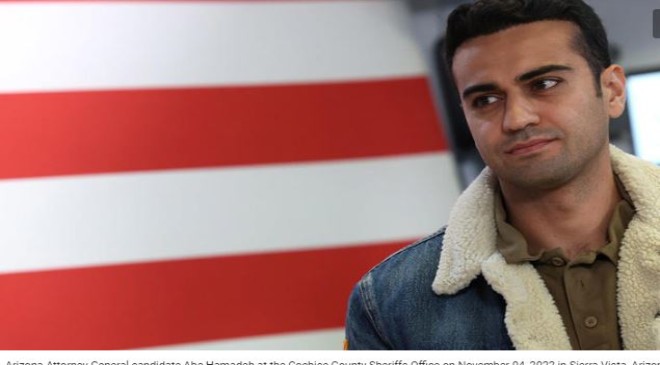 Republicans in Arizona have filed a lawsuit again alleging incompetence from election officials influenced the midterm election results, after a previous legal challenge was dismissed.

Abraham Hamadeh, the Arizona Republican nominee for attorney general, joined with the Republican National Committee in a lawsuit filed against several election officials in Mohave County on Friday. The lawsuit comes after a previous lawsuit, filed on Nov. 22, was dismissed as a judge argued the voting results had not yet been certified.

The Republicans said they “are not, by this lawsuit, alleging any fraud, manipulation or other intentional wrongdoing that would impugn the outcomes of the November 8, 2022, general election.”

The lawsuit, however, alleges “errors and inaccuracies” in areas like Maricopa County resulted in Hamadeh losing to Democrat Kris Mayes by 511 votes or a “margin of 0.02%.”

“The cumulative effect of these mistakes is material to the race for Arizona Attorney General, where after the first canvass the candidates are separated by just 511 votes out of more than 2.5 million ballots cast—a margin of two one-hundredths of one percent (0.02%),” the lawsuit read.

Kari Lake, the Republican nominee for Governor, also filed a 70-page lawsuit on Friday, echoing many of the same complaints.

“The eyes of the country are on Arizona,” the lawsuit read. Lake also fell to her Democratic opponent, Katie Hobbs, by about 17,000 votes.

Hamadeh announced the lawsuit on Twitter Friday, saying “every legal vote deserves to be counted.”

“Today my campaign along with the Republican National Committee has filed an election contest lawsuit,” Hamadeh said. “At 511 votes out of 2.5 million our race is the closest statewide race in Arizona history, it is currently undergoing a recount.”

“I jumped in this race because I know how important the rule of law is for a civilized society,” he added. “I urge all Arizonans to have patience during this time. Laws exist in order to provide justice and the courts are the guardians of justice.”

Hamadeh also said: “If we lose hope in our system we will no longer be that shining city upon a hill. I am fighting this fight to win and to make sure we regain confidence in our elections now and forever. Arizona, I will never stop fighting for you.”

These sentiments were shared by RNC Chairwoman Ronna McDaniel.

“Arizonans deserve fair and accurate election results,” she said. “Incompetence by election officials can cost votes, and Abraham Hamadeh’s election is razor-thin. Proud to join with his campaign in filing this election contest.”

Hamadeh continues to argue problems, such as those in Maricopa County, Arizona, contributed to mistakes that affected the outcome of the election.

“If a rural county had as many problems as Maricopa County did on Election Day every elected official and the media would demand an investigation,” the Republican nominee said. “It’s a shame and pains me to say that left-wing Pima County was better prepared and ran a more competent election than Maricopa.”

He also pointed to a judge extending voting hours in Apache County and delays at voting centers in Maricopa County.

Maricopa County Supervisor Bill Gates has admitted to and apologized for many of their polling sites experiencing problems with tabulation machines reading ballots, which persisted for hours on Election Day.