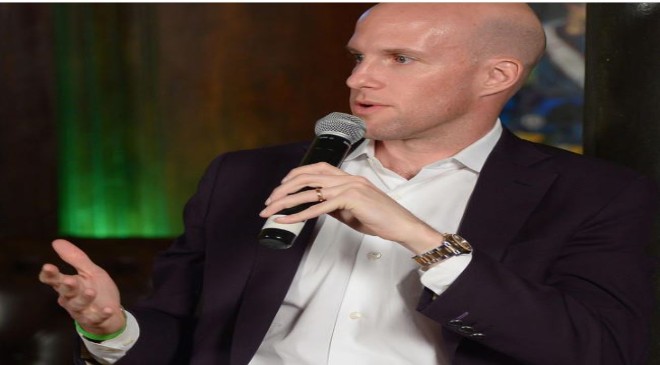 Grant Wahl, one of the leading soccer writers in the United States, died suddenly while covering a World Cup game Friday in Qatar.

U.S. media seated near him said Wahl fell back in his seat in a section of Lusail Iconic Stadium reserved for journalists during extra time of the game between the Netherlands and Argentina, according to the Associated Press. Reporters adjacent to him called for assistance and said emergency services workers responded very quickly. The reporters were later told Wahl had died.

Wahl, 48, provided coverage for CBS Sports and wrote on Substack at GrantWahl.com.

Born in Mission, Kansas, Wahl graduated from Princeton University with a political science degree in 1996. He landed a job straight out of college at Sports Illustrated, which he described as a dream. He worked there for 24 years, most prominently covering soccer and college basketball.

News of Wahl’s death was confirmed by his wife, Dr. Celine Gounder. “I’m in complete shock,” she wrote.

Tributes to the longtime SI writer poured in from around the soccer industry and greater sports world:

One of Wahl’s cover stories at Sports Illustrated ended up becoming one of the most famous in the magazine’s illustrious history – LeBron James’ first cover in 2002, in which he was declared the “Chosen One.”

“Very fond of Grant, and having that cover shoot, me being a teenager and him covering that, was a pretty cool thing,” James, 37, said after the Lakers’ game Friday night. “I’ve always kind of watched from a distance. It’s a tragic loss. It’s unfortunate to lose someone as great as he was.”

“Here in the United States Grant’s passion for soccer and commitment to elevating its profile across our sporting landscape played a major role in helping to drive interest in and respect for our beautiful game,” U.S. Soccer said in a statement. “As important, Grant’s belief in the power of the game to advance human rights was, and will remain, an inspiration to all. Grant made soccer his life’s work, and we are devastated he and his brilliant writing will no longer be with us.”

“We are shocked, saddened and heartbroken over the tragic passing of Grant Wahl. He was a kind and caring person whose passion for soccer and dedication to journalism were immeasurable,” MLS Commissioner Don Garber wrote on Twitter.

USWNT great Carli Lloyd said she was “completely shocked” when she learned the news while attending the Philadelphia 76ers’ game. “My heart goes out to his wife, family, friends and the soccer community. Truly heartbreaking,” she wrote.

“The soccer community lost a real one today. And for women’s soccer, one of the originals who helped drive our game forward. Grant Wahl never shied away from asking the tough questions, the right questions, the ones that got to the heart of the matter. He will be greatly missed,” longtime USWNT standout Becky Sauerbrunn wrote.

“Grant Wahl and soccer are inextricably linked,” USWNT legend Abby Wambach wrote. “I have looked to Grant and his work for decades. The soccer story here in the US has Grant’s name all over it.”

“The game in America was lucky to be served by such a brilliant journalist and, in my time covering the US men’s and women’s teams, a kind and helpful companion. I can’t quite believe this,” announcer Ian Darke wrote.

“My God. God. This is awful. Grant Wahl combined true goodness, passion for his job, love of his game, and love of life,” longtime Sports Illustrated football writer Peter King said on Twitter. “My heart aches for his wife Celine and his family. This is a heartbreaking night.”

Tim Layden, another longtime SI staffer, said that Wahl “grew into one of best of us.”

“I don’t know how else to say this: He cared about things. About everything,” Layden wrote.

“Just a devastating tragedy that is impossible to fathom,” SI’s Jimmy Traina, another former colleague of Wahl’s, wrote.

Longtime ESPN broadcaster Bob Ley wrote that Wahl “did more to inform and explain and celebrate the beautiful game than any other American. Ever. Full stop.”

“His loss is incalculable to our profession,” Ley added.

“Grant Wahl was everything a great journalist should strive to be, and an even better person. The best of us,” ESPN’s Jay Bilas wrote.