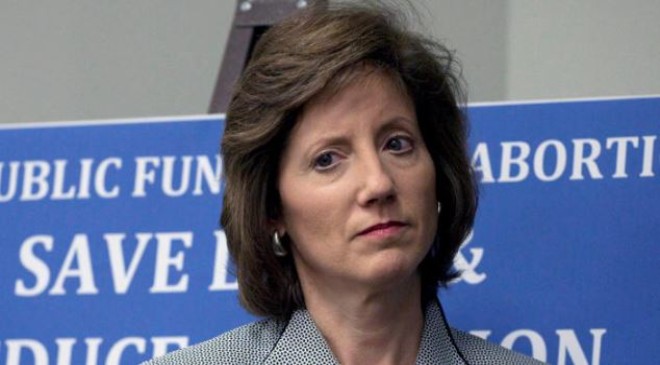 GOP Rep. Vicky Hartzler of Missouri broke down crying on the House floor on Thursday as she begged her colleagues to vote against the bipartisan bill aimed at protecting same-sex marriage, the Respect for Marriage Act.

“I hope and pray that my colleagues will find the courage to join me in opposing this misguided and this dangerous bill,” Hartzler said through tears.

Hartzler spent the first two minutes of her speech bashing the bill, claiming its “only purpose is to hand the federal government a legal bludgeoning tool to drive people of faith out of the public square and silence anyone who dissents.”

The Respect for Marriage Act requires states to recognize any marriage made in another state and repeals the federal “Defense of Marriage Act” which previously defined marriage as between a man and a woman.

Hartzler further called the bill “unnecessary,” and said that “Obergefell is not in danger,” a reference to the Supreme Court’s ruling in the Obergefell v. Hodges case in 2015 requires all states to recognize same-sex marriages and issue marriage licenses to same-sex couples.

In Justice Clarence Thomas’ opinion in the Supreme Court’s Dobbs v. Jackson Women’s Health Organization from 2022, he called for the high court to reconsider several Supreme Court rulings that were made using the due process clause, which includes the Obergefell ruling.

Following his opinion and the Supreme Court’s reversal of the nation’s abortion protections granted in the famous Roe v. Wade case, Democrats labored to enshrine same-sex marriage protections in law.

This is not Hartzler’s first time fighting against the expansion of marriage protections — as the Kansas City Star first noted, prior to her time in Congress, Hartzler vehemently pushed for an amendment to be added to Missouri’s constitution that would define marriage as between a man and a woman.

Hartzler, who’s been in Congress since 2011, will not be returning in 2023 after losing her campaign for an open Senate seat.