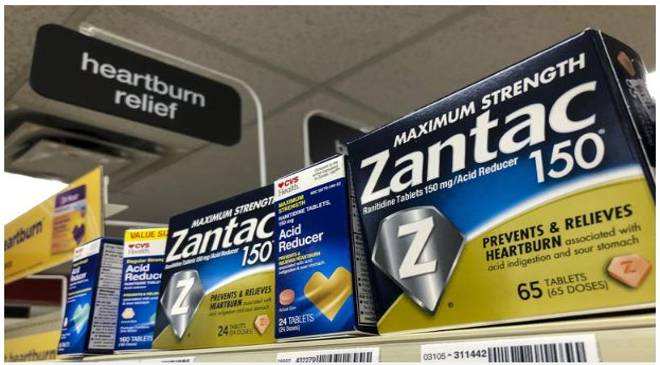 (Bloomberg) — GSK Plc and Sanofi rose for the first time this week following a major selloff triggered by investors waking up to the risk that US juries could hold the drug companies accountable for cancers allegedly caused by contaminants in a once-popular antacid.

Shares in Britain’s GSK surged more than 4% while the French group Sanofi rose 2.4% after both pharmaceutical giants said they would vigorously defend any claims and disputed the idea that an ingredient in the drug Zantac caused cancer.

The knee-jerk reaction to the Zantac litigation is “somewhat overdone”, said Deutsche Bank analyst Emmanuel Papadakis as he upgraded Sanofi to hold from sell.

Fears that US juries could award large payouts in hundreds of trials that are under way in the US led to one of the biggest selloffs in health-care stocks in decades Thursday, with investors pulling some $40 billion from Sanofi, GSK Plc and its consumer health spinoff Haleon in the past few days.

The recalled heartburn drug Zantac is the latest to face a wave of US product-liability lawsuits that could expose companies to billions of dollars in damages from jury trials. Drugmakers such as Pfizer Inc. also are potentially in the litigation cross-hairs, with one analyst’s estimate putting the exposure for all of the companies at as much as $45 billion.

“The allegations that corporations knew about the problems with Zantac and ignored them won’t go over well with US juries,” said Carl Tobias, a University of Richmond law professor who specializes in mass-tort cases. “It potentially puts them on the hook for huge punitive-damage awards.”

Already as many as 160,000 consumers have filed claims in a US federal registry and if only 60% of those pursue it further, the settlement value could reach between $7.5 billion and $10 billion, according to Bloomberg Intelligence. There are a total of at least 3,700 suits already filed between state and federal courts in the U.S. and lawyers expect tens of thousands more to come.

Mass litigation can be a costly and time-consuming problem. Bayer AG, which has for years been defending claims that its top-selling Roundup weedkiller can cause cancer, has already set aside $16 billion to deal with settlements and legal costs tied to the cases. A group of 22 women in Missouri were awarded more than $4 billion in 2018 over claims talcum powder made by Johnson & Johnson caused their cancers, though the figure was reduced to $2.1 billion on appeal.

The manufacturers, a who’s who of some of the biggest pharmaceutical companies in the world, defended their actions and said they were standing on strong legal grounds. They questioned the scientific link to cancer and said the levels of the chemical in Zantac were close to what’s found in food.

It probably doesn’t ease investors’ nerves to learn that Brent Wisner, a lawyer who doggedly pursued Bayer — and has shown a knack for winning — is representing those suing over Zantac. He said in an interview recently that the drugmakers, generic companies, retailers and distributors all “have a piece of the liability” in selling a drug that was taken by millions.

“We’ve had some really interesting discovery in the last six months showing that they knew about this problem and were negligent in the way they did things,” Wisner said in the interview.

While news of the pending litigation isn’t new, the publication of notes from drug company analysts in recent days jarred investors as the first court cases draw near.

“Investor interest in the Zantac product-liability litigation is beginning to pick up,” analysts at Morgan Stanley said in a note to clients dated Aug. 5. Damages could possibly reach $10.5 billion to $45 billion, they said, adding there’s currently “considerable uncertainty” over the potential financial impact.

While the outcome of the litigation is impossible to judge, “not knowing will be enough to deter some investors,” UBS analysts warned in a note.

A trial is scheduled for Aug. 22 in state court in Madison County, Illinois — a venue where juries have handed down big verdicts in the past. Two residents of that state are suing more than a dozen defendants, including GSK, Pfizer, Boehringer Ingelheim GmbH, Sanofi and the Walgreens pharmacy chain, claiming their esophageal and kidney cancers were caused by Zantac tainted with NDMA, an impurity and probable carcinogen.

The basic allegation in this case, and all the other litigation, is that the makers of Zantac, whose marketing rights have been owned by multiple different companies over the years, knew the active molecule in the antacid, called ranitidine, degraded and turned into NDMA. Plaintiffs contend the companies hid this from government regulators and took steps to cover up problems with the drug to continue reaping billions in sales, according to court filings.

“It’s a wild card as to what the jury will decide,” in the Illinois case, said Holly Froum, a litigation analyst at Bloomberg Intelligence. “That’s one reason this case may settle before trial.”

If the Illinois case settles, the next scheduled trial is in February in state court in California. That state’s courts have historically been pro-plaintiff and the Oakland courtroom where it’s slated to be tried produced a $2 billion jury verdict against Bayer and Monsanto in the Roundup litigation back in 2019.

While the Zantac case is being heard by a different judge, the Roundup verdict could be what’s giving investors cause for concern. This case involves claims from an aerospace engineer that his bladder cancer was tied to Zantac.

In addition to California and Illinois, there are more than 2,000 cases currently on file in state courts, including other locations such as Delaware, Connecticut, Texas and Tennessee. Plaintiffs’ lawyers are projecting there will more than 50,000 cases filed by October when a procedural deadline expires.

There are also more than 1,700 cases consolidated before a federal judge in Florida in what’s called a multi-district litigation. There will be a hearing in September on whether the science underlying the Zantac claims is legitimate. That will determine whether the cases can go to trial or will be dismissed, which could be crucial for the four main defendants in this litigation – GSK, Pfizer, Boehringer Ingelheim and Sanofi.

A large number of generic drugmakers also have been sued, including Teva Pharmaceutical Industries Ltd., Sun Pharmaceuticals and Doctor Reddy’s, although the greatest exposure lies with the main defendants.

GSK developed Zantac in the 1980s and turned it into one of the industry’s first blockbusters, with more than $1 billion of sales. The pharma and vaccines giant is considered to potentially have the greatest exposure to the looming litigation which comes at a difficult time following the spin off of Haleon. GSK has already faced pressure from activist investor Elliott Investment Management and lingering questions about its drug pipeline. The company has been making some acquisitions in recent months to bolster its lineup of potential treatments and vaccines.

Sanofi said Thursday it remains confident in its legal defenses regarding the Zantac litigation. Last month during an earnings call, the company said the amount of ranitidine found in Zantac barely exceeded the amounts found in common foods.

“Sanofi contends that the plaintiff will be unable to prove that Zantac causes any type of cancer. Basically, the science does simply not support the plaintiff’s claims,” said Julie Van Ongevalle, head of consumer health at the French drug giant.

GSK said the the litigation was “inconsistent with the scientific consensus,” in a statement late Thursday. The FDA and European Medicines Agency have concluded there is no evidence of a causal association between ranitidine and the development of cancer, it added.

Pfizer said it has significant defenses to the litigation, which has legal and factual issues that the courts must address. It only sold Zantac from 1998 to 2006 and has substantial indemnification claims, the company said in a statement on its website.

Boehringer Ingelheim declined to comment on the lawsuits, while Haleon said it’s not a party in the litigation proceedings and that it has never marketed the heartburn drug in any form in the US.

IN RE Zantac Products Liability Litigation, No. 20-mdl-02924, U.S. District Court for the Southern District of Florida (West Palm Beach)