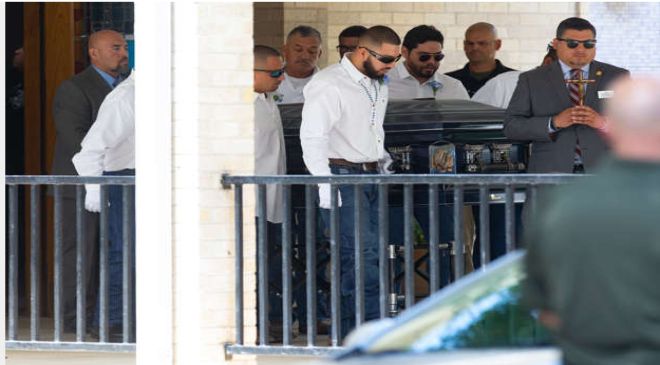 As new details emerge that change the police narrative of what happened during the Robb Elementary School massacre last week, the school district police chief who led the law enforcement response had not responded to investigators for two days, a public safety official said Tuesday.

Uvalde school district police department chief Pete Arredondo, who was sworn in as a newly elected city council member Tuesday, did an initial interview with the Texas Rangers, which is investigating the May 24 shooting, but hasn’t responded for a follow-up interview in two days, said Travis Considine, spokesperson for Texas Department of Public Safety, on Tuesday.

But Arredondo said Wednesday he was “in contact” with the Department of Public Safety “every day,” when asked about the reports by CNN. The network reported Arredondo was wearing a badge and gun Wednesday, and that Arredondo said the city council swearing in was “a private thing.”

Meanwhile, state authorities now say that the teacher who police said left a door propped open minutes before the gunman entered the school and killed 19 children and two teachers had actually closed the door, though it did not lock.

Wednesday, a funeral was held in Uvalde for teacher Irma Garcia, 48, and Garcia’s husband, Joe Garcia, 50, who died suddenly after visiting a memorial site at the school. Jose Flores Jr., 10, will also be laid to rest.

Irma and Joe Garcia were high school sweethearts. A few years later, in 1997, they were married in Uvalde and went on to build a life together, including raising four kids.

On Wednesday, their children – ages 23, 19, 15 and 13 – bore the unfathomable heartbreak of having to bury both their parents. They were laid to rest almost exactly one month before what would’ve been their 25th wedding anniversary.

Irma, 48, was one of two teachers, along with 19 students, killed last week at Robb Elementary. Two days later, Joe, 50, visited the school to place flowers at the memorial site in her honor. He died of a heart attack later that morning.

Mourners filled the pews of Sacred Heart Catholic Church in Uvalde to attend the couple’s funeral Mass, and pay their respects. Like the funerals for 10-year-olds Amerie Garza and Maite Rodriguez the day before, the service was open to family and friends only. A public livestream was available on the funeral home’s website.

“The love between them shone through and was expressed by their dedication to each other, which extended to their children and to their community,” said Archbishop Gustavo Garcia-Siller of San Antonio. “She acted out of love up until her last breath. His love for her was so strong that his heart could not contain it.”

Dr. Cecilia Murillo was going about a typical Tuesday at the Uvalde Family Practice Association. Then the clinic received a request for any medical staff available to immediately head to the Uvalde Memorial Hospital.

Murillo said she helped treat some of the victims there who had received gunshot wounds to their limbs, and providing them with psychological first aid given the trauma they had experienced. She was also tasked with inspecting the remains of the some of the victims to look for skin and dental features that could help identify them so authorities could notify their families.

This was the second time a mass shooting had hit so close to home.

Murillo is an El Paso native. On Aug. 3, 2019, she traveled to her hometown for a family event from Lubbock. Then she heard that a 21-year-old gunman had driven to El Paso and opened fire at a Walmart, killing 23 people.

“It hurts just as equally. Each time,” she said.

Stopping short of calling the state Legislature back to Austin for a special session, Texas Gov. Greg Abbott on Wednesday asked House and Senate leaders to form special committees to study school safety and mass violence.

“As Texans mourn the tragedy that occurred at Robb Elementary School in Uvalde last week, we as a State must reassess the twin issues of school safety and mass violence,” Abbott said in letters to House Speaker Dade Phelan and Lt. Gov. Dan Patrick, who presides over the state Senate.

Democrats have been pushing Abbott to call a special session devoted to finding solutions to gun violence, particularly in schools, while Abbott and other GOP leaders have adopted a more measured approach, saying it makes sense to wait until the Texas Rangers and federal investigators complete probes into the Uvalde shooting and the police response to it.

“We are working through plans on how to serve students on other campuses and will provide that information as soon as it is finalized,” Harrell said in a statement.

Uvalde Mayor Don McLaughlin previously told KXAS-TV he thought students shouldn’t return to the building, adding, “That building needs to be gone.” Texas Democratic state Sen. Roland Gutierrez said federal funds could be available to help with the costs of demolishing the school.

The teacher who police said left a door propped open minutes before a gunman entered Robb Elementary School had actually closed the door, though it did not lock, state authorities now say.

State police initially said the teacher, who has not been identified, propped the door open with a rock and did not remove it before the gunman entered.

“We did verify she closed the door. The door did not lock. We know that much and now investigators are looking into why it did not lock,” Considine said Tuesday.

Officials have offered differing accounts of how the May 24 shooting unfolded, including details about officers’ interactions with the gunman and how long it took for law enforcement to enter the classrooms where he was holed up.