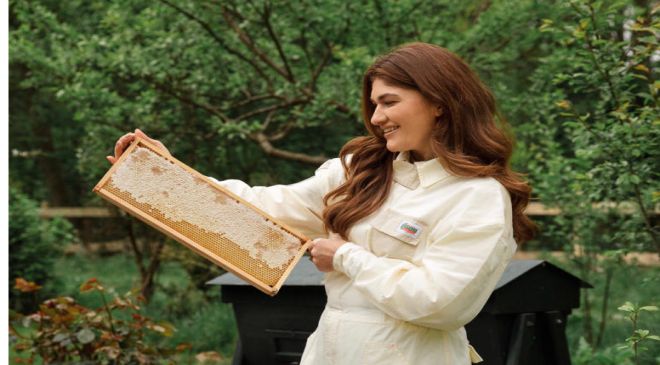 The Netherlands-based beauty brand, which makes honey-infused hair and skin products, has named Negar Mirsalehi to the newly created title of beekeeper in chief.More from WWD

“I am beyond excited,” the elder Mirsalehi told WWD exclusively. “Gisou has inspired an incredible community over the years and has done a seamless job of harnessing their passion to educate and advocate for the importance of bees. I can leverage my years of experience working alongside my father in our family’s bee garden. I’m very passionate about carrying on the legacy of my father and the generations of beekeepers before him, building upon the work they’ve done to raise awareness for the importance of bees in our ecosystem and evolving and growing beekeeping as a practice.”

In fact, the family business stems from six generations of beekeepers, including Negar, Negin and their father. Their mother, a hairdresser, first inspired the girls to use honey in their hair routines as teenagers to create shine.

Years later, Negin Mirsalehi went on to become a fashion ambassador and influencer in her native Netherlands before launching Gisou in 2015 with her longtime partner Maurits Stibbe. But both sisters are long-time beekeepers. In the case of Negar, all the buzz has been in the family bee garden, where she’s worked for the last five years, alongside her father, sharpening her skills.

In the newly created beekeeper in chief role, the elder Mirsalehi has been tasked with raising awareness of the importance of beekeeping, while working with local beekeepers around the world to support bee populations in urban communities. She will also oversee the Mirsalehi Bee Garden in Almere, Netherlands, and lead initiatives and informational workshops — such as the “Gisou Bee-Learning Course” and “Female Beekeepers Project” — to help train future beekeepers.

“With five years of intensive beekeeping training under her belt and decades of growing up in the Bee Garden, she’s the perfect person to carry on the family’s legacy,” said Nathalie Manivong, Gisou’s chief marketing officer and chief digital officer.

The younger Mirsalehi added: “I am so excited for my sister to officially join the Gisou family. Together, we hope to inspire a new generation of beekeepers. Negar will be at the forefront of carrying our family’s legacy onwards and forward.”

Chief beekeeper is just the latest in a string of unorthodox — albeit creative — new C-suite titles. Amazon and Google have chief happiness officers. In May, childrenswear firm Carter’s named Hilary Duff its first chief mom officer. J. Crew has a chief experience officer. Chief sustainability officers have been sprouting up all over the place. There are also chief people officers and chief wellness officers, among other unconventional titles.

But in the case of Gisou, the beekeeper in chief role is another sign of growth.

French private equity firm Eurazeo acquired a minority stake in Gisou in April after closing a Series B funding round, with the intent of scaling the brand. Mirsalehi and Stibbe remain majority owners of the business. The added funds are in addition to pre-pandemic backing made by Vaultier7. The London-based firm made a multimillion-dollar minority investment in Gisou in early 2020, helping the brand launch its wholesale business with Sephora in the U.S.

At the time, the duo told WWD that they have their sights set on building a 100 million euro company by the end of 2023, with plans to expand the wholesale and direct-to-consumer businesses in multiple markets.