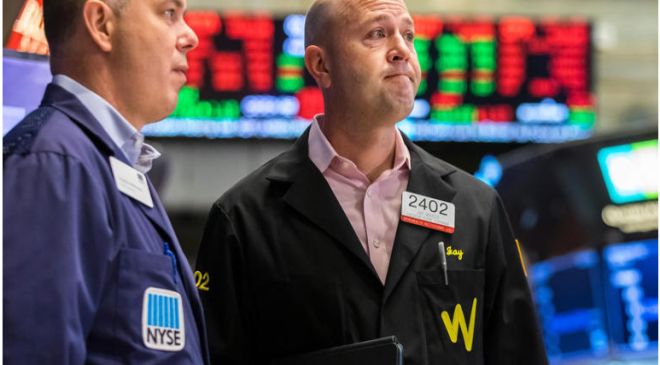 March’s employment report is coming up in the week ahead, but developments in Ukraine, the price of oil and an inflation report are likely to steer the market.

Stocks notched gains for the week, while interest rates ripped higher and oil prices jumped. Energy was the top-performing sector, up more than 7%, as West Texas Intermediate crude futures closed nearly 9% higher for the week. The closely watched 10-year Treasury yield was on a tear, reaching 2.5% Friday, its highest level since May 2019, from 2.14% just a week earlier.

Traders are also watching the rise in interest rates to see if they will stall the market’s gains. The S&P 500 was up nearly 1.8% for the week, ending Friday at 4,543.06.

“Since the war started, on the ten days that were up, the S&P 500 was up at least 1%,” said Art Hogan, chief market strategist at National Securities. “I don’t think next week is going to be any different. We’re going to be headline driven, whether it’s economic data, news out of Ukraine or crude oil futures.”

The market has chopped around but is higher for the month of March so far. The S&P was up nearly 3.9% for the month-to-date on Friday.

“We should take advantage of this short-term momentum. I feel pretty good about it short-term. I mean several weeks,” she said. “We’ve also seen some nice short-term breakouts … names getting above their 50-day moving averages.”

She said 58% of the S&P 500 companies are now above their 50-day moving averages, a positive sign for momentum. The 50-day is simply the average closing price over the past 50 sessions, and a move above it can signal more upside.

Stocks such as Tesla, Microsoft, Apple and Alphabet have all regained their 50-day moving averages, she said. Stockton noted that some high-growth tech names have also done so. She pointed to CLOU, the Global X Cloud Computing ETF.

There is a busy economic calendar in the week ahead, highlighted by the March jobs report and personal consumption expenditures data.

Consumer confidence and home price data will be released Tuesday.

PCE includes an inflation measure that is closely watched by the Fed. Economists expect to see core PCE inflation up by 5.5% year-over-year when it is reported Thursday, according to Dow Jones.

There is also the ISM manufacturing survey reported Friday. The key nonfarm payrolls report will also run that day.

“I definitely think at this point that inflation data is much more meaningful than employment, in terms of the path of the economy,” said Ben Jeffery, vice president of U.S. rates strategy at BMO. Jobs will still matter, but the Federal Reserve has pivoted to focus more on combating inflation, while the economy is reaching maximum employment.

Fed Chair Jerome Powell made that point when he spoke to economists Monday, saying the central bank would be willing to be more aggressive raising interest rates to battle inflation. Stocks initially sold off on his comments, amid fears the Fed could slow the economy or even bring on a recession.

Since then, stocks moved higher, but interest rates have been galloping higher. The fed funds futures market has been pricing in 50-basis-point rate hikes — or 0.5% — in both May and June.

“[Nonfarm payrolls] will matter … I do think it’s probably going to be more a story of just how far the market is willing to press the 50-basis-point rate hike narrative, which is likely to be more pressing next week,” said Jeffery. “The excitement that once surrounded jobs is definitely less so at this point in the cycle.”

In the bond market, Jeffery said investors will be watching Treasury auctions Monday and Tuesday, when the government issues $151 billion in two-year, five-year and seven-year notes.

Rising oil prices have been driving inflation expectations higher, and the bond market is closely watching crude prices, as is the stock market. West Texas Intermediate crude futures settled up 8.8% for the week, at $113.90 per barrel Friday.

“It seems like oil north of $100 has some staying power,” BMO’s Jeffery said.

Michael Arone, chief investment strategist at State Street Global Advisors, said the pattern between stocks and oil will continue to be important. When oil has spiked recently, stocks have weakened, he said. Meanwhile, when crude falls, stocks have been able to rally,

“It seems like this week it was a bit more pronounced again when oil prices were rising pretty aggressively,” Arone said. “It’s got this interconnectedness to a few things — sentiment about the Ukraine conflict, how’s that going, inflation and ultimately how hawkish or dovish the Fed is going to be. I think it’s emerged as one of those binary proxies for these other elements in the market.”

“It’s just a barometer for those other things — the Ukraine conflict, inflation and the Fed,” he said.

Arone said as investors anticipate some sort of resolution that will end the conflict in Ukraine, but it’s not clear when. “The headlines coming out of Ukraine will continue to cause volatility,” he said. “At the margin, investors are gaining comfort with the likely outcome.”

“Everyone knows multiples have contracted, stocks have gotten cheaper, but one thing that’s gotten lost on investors is top-line revenues have this correlation with inflation,” he said. “Corporate profits and CPI [the consumer price index] are kind of connected. You have multiples contracting but earnings estimates are rising.”

Arone said stocks are reasonably positioned and investors are getting more comfortable that there will be a favorable resolution to the war.

“If we can get past the Ukraine conflict and some of the fears about the Fed and inflation, I think the fundamentals are okay,” he said.