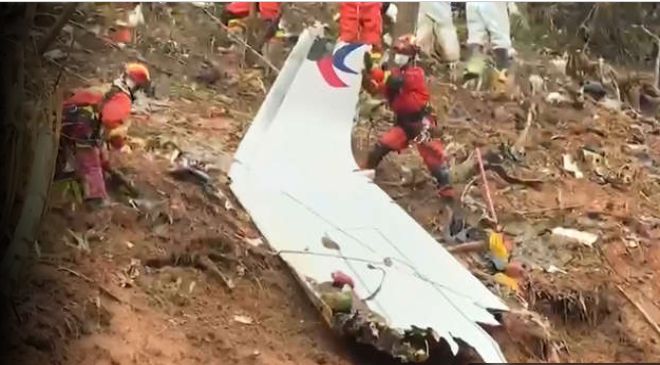 (Bloomberg) — At least one piece of the Boeing Co. 737-800 that crashed in China appears to have broken loose well before impact, a finding that adds mystery to the plane’s fatal dive.

The piece suspected to have come from the China Eastern Airlines Corp. Ltd. jet was found about 10 kilometers (6 miles) from the main wreckage area, Chinese officials said at a briefing Thursday.

If investigators confirm that the part came from the jet, it would indicate the plane suffered some kind of midair breakup, which could offer clues about what led to Monday’s crash or at least shed light on the flight’s final seconds.

“The questions are: exactly what piece was it and when did it come off?” said Jeff Guzzetti, the former chief of accident investigations at the U.S. Federal Aviation Administration.

Flight 5735 from Kunming to Guangzhou went down without an emergency radio call from pilots, slamming into a forested hillside about 100 miles from its destination, according to the Civil Aviation Administration of China. There were 132 people aboard.

Communication with the flight was normal prior to the crash, China Eastern representative Liu Xiaodong said at a briefing Friday.

The highly unusual dive has baffled crash investigators and safety experts. Aircraft such as the 737-800 are designed not to dive so aggressively, so some kind of aircraft failure or pilot action would be required to keep its nose pointed down for so long.

A piece about 1.3 meters (4.3 feet) long and 10 centimeters (4 inches) wide believed to be from the plane was found on farmland, Zheng Xi, head of the Guangxi fire-fighting rescue team, said at a briefing.

It’s impossible to know at this early stage in the investigation whether the piece came loose as a result of stresses during the high-speed plunge or broke off before the sudden descent.

Guzzetti said it most likely occurred as the plane plummeted from a cruising altitude of about 29,000 feet in about 1 minute and 35 seconds.

“In my view, that’s the aircraft shedding parts as it’s coming down,” he said.

If that’s the case, it would provide clues about the plane’s speed and possible pilot maneuvers.

The aircraft didn’t break apart completely. It continued to transmit its position until it reached 3,225 feet, according to data collected by the Flightradar24 tracking service, suggesting the main structure remained intact.

A Bloomberg News review of Flightradar24 data showed the jet was flying well above normal speeds during the dive, possibly nearing the speed of sound.

Going that fast on a jetliner that’s not designed for such speeds could cause relatively light-weight components on wings and tail sections to break loose, according to an investigation into the Dec. 19, 1997 crash of a SilkAir 737-300 in Indonesia.

That jet was traveling close to the speed of sound as it dove into a river, investigators concluded. The Indonesian National Transportation Safety Committee said there wasn’t enough evidence to say what caused the crash, but the NTSB dissented, saying that the captain most likely did it intentionally in a murder-suicide.