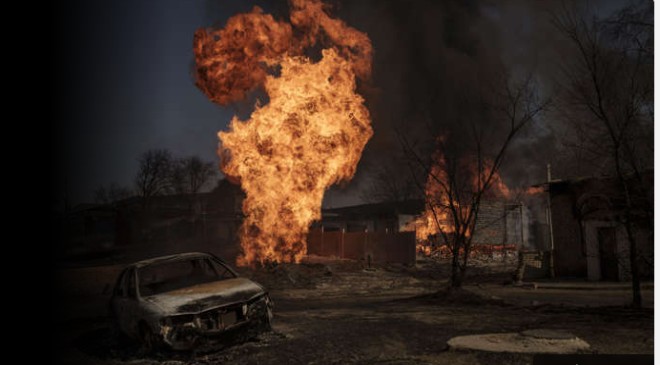 Ukraine’s president has accused invading Russian forces of using white phosphorus, a controversial chemical substance that can cause severe and indiscriminate harm to civilians.

“This morning, by the way, there were phosphorus bombs. Phosphorus Russian bombs. Adults were killed again and children were killed again,” President Volodymyr Zelensky said during a virtual address to NATO leaders on Thursday, as the military alliance held an emergency summit on Russia’s war in Ukraine.

The Washington Post has not been able to independently verify reports of white phosphorous being used in Ukraine. Though the chemical is infamous due to the extreme damage it can cause, other incendiary weapons and chemicals used by militaries for illumination have been mistaken for white phosphorous in the past.

An industrial chemical with incendiary properties, white phosphorous can be used in conflict for a variety of reasons. When a munition containing the substance explodes, the chemical inside creates a thick white cloud. Many countries, including the United States, have used the substance to create smokescreens during conflict or to signal to troops.

But the substance itself can cause serious harm to humans, including death. White phosphorous burns at an extremely high temperature of 800 degrees Celsius and above, so if the substance comes into contact with human flesh it can burn all the way to the bone. As it reacts to oxygen, it can even reignite when bandages are removed.

The chemical can also enter the bloodstream if it comes into prolonged exposure with flesh, poisoning organs like the kidneys, liver and heart and possibly causing multiple organ failures. The smoke released by white phosphorous can also damage the respiratory system.

The use of incendiary weapons in wartime has a checkered past. The United States’ use of napalm in Vietnam created international outrage. Decades later, the use of white phosphorus in Gaza by Israeli forces prompted global condemnation. Like chemical weapons, they can cause indiscriminate and lasting harm to civilians.

The Convention on Certain Conventional Weapons, signed by Russia and 112 other countries, bans the use of incendiary weapons in civilian areas. But since the primary purpose of white phosphorous is to create smoke, some legal scholars argue it should not be considered an incendiary weapon.

Groups like Human Rights Watch have called on governments to rewrite Protocol III of the convention, which focuses on incendiary weapons, to more clearly include white phosphorous and other modern weapons. Targeting civilian areas indiscriminately is considered a war crime regardless of the weapon used under international humanitarian law.

Russian officials have also accused Ukraine of using white phosphorous in fighting against Moscow-backed separatists after 2014, though Ukraine denied using incendiary bombs and rights groups said they found no evidence to back the claims. In a 2015 letter to Human Rights Watch, Russian Foreign Minister Sergei Lavrov said that Russia agreed that “improper use of such weapons as incendiary ones causes significant humanitarian damage.”