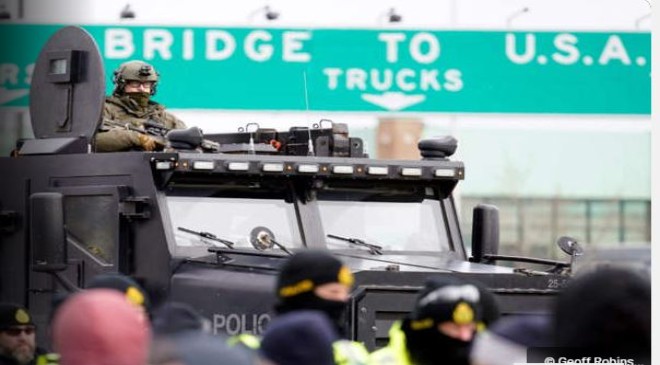 Amajor US-Canada border crossing reopened late Sunday almost a week after it was forced shut by truck driver-led protests against coronavirus restrictions, prompting police to quell the demonstration with a series of arrests.

The blockading of the Ambassador Bridge, which handles an estimated 25 percent of trade between the two countries, had disrupted business in the world’s largest economy and forced automakers in both the United States and Canada to halt or scale back production.

The demonstrations, which have also paralyzed the Canadian capital Ottawa, have sparked similar movements in France, the Netherlands, Switzerland, Australia and New Zealand. Some US truckers are considering a protest for March.

“The Ambassador Bridge is now fully open, once again allowing the free flow of commerce between the Canadian and U.S. economies,” the Detroit International Bridge Company said in a statement.

In a tweet, Canadian Border Services confirmed the reopening but said “non-essential travel is not advised.”

Police had begun clearing the bridge to the US city of Detroit on Saturday, successfully removing trucks from one major intersection. But some demonstrators remained, extending the protracted standoff and preventing traffic from flowing.

There will be zero tolerance for illegal activity,” police in Windsor, Ontario tweeted.

Warning of “serious consequences” for the US economy, Washington had applied pressure on the Canadian government, asking it last week to use “federal powers” to end the blockade.

As police moved to clear the protest over the weekend, US officials praised the “decisive” action.

Prime Minister Justin Trudeau had underscored that “this conflict must end,” but faced criticism for failing to act more decisively.

Truckers had originally converged on the capital to press their demand for an end to a vaccination requirement affecting drivers crossing the international border.

But the movement spread, with protesters eventually calling for an end to all vaccine mandates, whether imposed by the federal or provincial governments.

Ottawa has been the epicenter of protests. On Saturday, police said about 4,000 demonstrators were still occupying the downtown area, in the third weekend of the movement.

The atmosphere among protesters was mostly festive, with music, dancing and constant sounding of air horns — but the noise, obstruction and sometimes rude and aggressive behavior of demonstrators has harmed area businesses and infuriated many locals.

In response, authorities in Ontario declared a state of emergency, while the provincial supreme court ordered truckers to end their blockade.

But the truckers’ message resonated more widely than officials expected.

One opinion survey found that about one-third of Canadians support the protest movement.

The truckers also found support among conservatives and vaccine mandate opponents across the globe, even as Covid-19 measures are being rolled back in many places.

In Paris on Saturday, police fired tear gas and issued hundreds of fines in an effort to break up convoys coming from across France.

Vehicles in the Netherlands brought The Hague’s city center to a standstill in another Canada-style protest.

In Switzerland, hundreds of protesters marched in Zurich to protest virus restrictions, while several thousand others rallied against them, Swiss media reported.

An estimated 10,000 Australian protesters marched through the capital Canberra to decry vaccine mandates, while in New Zealand, anti-mandate activists have been camped near the parliament for days.