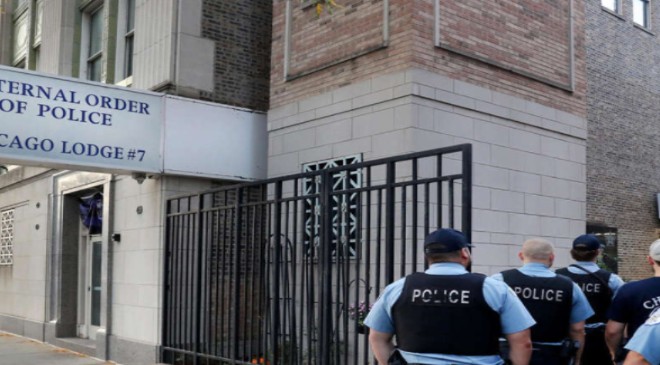 A potential safety issue is coming to a head in Chicago as police officers resist COVID-19 vaccine mandates, possibly leaving their departments under-staffed as homicides and shootings increase.

Chicago Police Union president John Catanzara has urged officers to ignore the midnight deadline to report their vaccine status to the city. If the city tries to punish officers for not complying, only half will show up to patrol city streets, Catanzara predicted.

“Any sergeant, lieutenant, captain or above who gives you an order to go in that portal is not valid. You are able to refuse that order,” he said.

Mayor Lori Lightfoot said officers who refuse to report their vaccine status “do so at their peril.”

“Insubordination is not something that we can tolerate,” Lightfoot said.

The policy, announced by Lightfoot in August, requires all city employees to be fully vaccinated by Saturday or risk being placed on no-pay status. The policy allows workers to be unvaccinated through the end of the year if they undergo regular testing while off the clock and pay for it themselves.

Lightfoot insisted Chicago residents should not be concerned about their safety. https://products.gobankingrates.com/pub/4676bc08-11ad-4872-8fef-ffbda36ebb37?targeting[keyword]=news-tech

“Obviously we have contingency plans in place if they are necessary, but I am confident that they are not going to be necessary,” she said.

Chicago alderman Anthony Beale, a critic of Lightfoot, is worried about safety this weekend.

“I’m going to implore that the governor of this great state of Illinois declare a state of emergency,” he said.

Illinois Governor J.B. Pritzker has said that the National Guard is ready to help, but the mayor has so far not requested it.

It’s not only Chicago police officers facing vaccine mandates. Hundreds of officers in Seattle, Washington, and San Francisco, California, could lose their jobs if they don’t submit their vaccination status.

In the past year, COVID-19 has been the leading cause of death among police officers nationwide. More than 700 officers have died since March 2020, according to the Fraternal Order of Police.