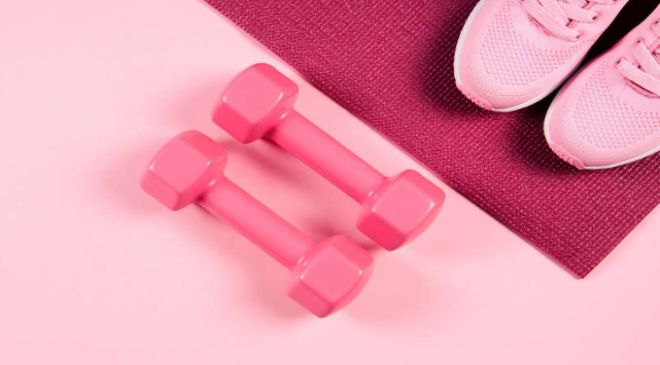 Your breast health matters every day, and there’s no better time to rethink your habits for optimal breast health than October, which is Breast Cancer Awareness Month. Breast cancer ranks as the second leading killer of women, and it’s the most common cancer in women, with one in eight women being diagnosed with it in her lifetime, according to the American Cancer Society.

Yet what you may not know is that you have more control over your breast cancer risk than you think, even if you have a family history of it. “Only 5 to 10 percent of breast cancers can be blamed on inherited gene mutations such as BRCA, and merely 13 percent of women with breast cancer have a first-degree relative with a history of the disease,” says Kristi Funk, MD, breast cancer surgeon, medical director of the Pink Lotus Breast Center in Beverly Hills, Calif., and author of BREASTS: The Owner’s Manual. “While genetic predisposition is significant when present, it’s empowering to realize that the majority of all breast cancer cases are under our control, in the choices we make every single day.”

In fact, about 75 to 80 percent of what happens to your breasts is under your control, says Heather Richardson, MD, breast health specialist at the Bedford Breast Center in Beverly Hills, Calif. Of course, that doesn’t guarantee something won’t happen. “Some women can do everything right and still get breast cancer, namely because everybody has a cancer cell somewhere and it may happen that your immune system’s policing doesn’t get it,” she says. That said, prevention can go a long way.

Although the median age for a breast cancer diagnosis in the United is 62, you’re never too young—or old—to embrace healthy breast habits. “The same habits that promote breast health are the ones that stave off all other major killers, including heart attacks, other cancers, stroke, diabetes, Alzheimer’s, and obesity—and even disease states that don’t necessarily kill but can make you miserable like autoimmune disorders, joint pain, and depression,” Dr. Funk says.

So what habits should you adopt now for healthier breasts? Below are eight to keep in your toolbox.

As soon as you start menstruating, you should be doing monthly self-exams on your breasts to recognize lumps and bumps and spot changes in the future more quickly, Dr. Funk says. Learn how to do an exam via her how-to video.

Keep up with mammograms.

Along with self-exams, get yearly mammograms starting at age 40. “This is a general guideline, as your doctor may want to tweak something,” Dr. Richardson says. For instance, if you have a family history of breast cancer, your doctor might recommend you start mammography earlier. One other point? You need to know if you have dense breasts, something a mammogram will reveal. If so, you’ll need additional screening to help see more clearly through that dense tissue.

Every time you eat, you move yourself closer to—or further from—cancer, and there’s no denying that a plant-based diet is best for the breasts. “Plants, legumes, and 100 percent whole grains provide nutritional armor for cancer risks,” Dr. Funk says. On the flip side, animal products can increase cancer risk, namely by elevating estrogen, which fuels 80 percent of all breast cancers. Yet by eating plants, you’ll consume high amounts of antioxidant-rich foods that release molecules that can scavenge free radicals, eliminate carcinogens that you eat and encounter, prevent and repair DNA damage, identify and destroy harmful cells in the body, inhibit new blood supply required by tumors to grow, stimulate the immune system, regulate hormone metabolism, and reduce inflammation, she adds. And while it’s ideal that you eat plants 100 percent of the time,every time you swap plants for animals, your health will benefit.

Although the plant kingdom is loaded with good-for-breasts food, broccoli, soy, and ground flax should be in your daily lineup, Dr. Funk says. Eat a half cup of raw or steamed broccoli for its cancer-reducing isothiocyanates. Steam it or eat it raw, but chew broccoli thoroughly to break down the cell walls and let the molecules mix, creating sulforaphane, which Dr. Funk says “displays ridiculous talent when it comes to seeking out and destroying breast cancer cells.” Then get two to three servings of soy a day, as it decreases the occurrence, recurrence, and death rates from breast cancer. Finally, eat 1 tablespoon of ground flax, which contains powerful cancer-fighting phytonutrients called lignans

Don’t be duped into thinking alcohol is “safe,” as a study from the journal Lancet concluded there is no safe level. “Alcohol weakens your immune system, increases estrogen levels, and interferes with your body’s ability to convert folate into its DNA-protective form, methylfolate, all of which contributes to alcohol being a risk factor for breast cancer,” Dr. Funk says, adding that you should consider supplementing with methylfolate. If you do drink, the American Cancer Society advises no more than one drink a day for women, two for men. She even takes it a step further and says that among the types of alcohol, only red wine might have redeeming qualities, namely because resveratrol from the skin of red grapes inhibits the formation of cancer. What’s more, “red wine behaves like an aromatase inhibitor, a drug given to estrogen-positive breast cancer patients to stop the conversion of your body’s steroids into estrogen,” she says.

Active women have a 20 percent lower risk of developing breast cancer than inactive women, Dr. Richardson says. On the flip side, being sedentary increases breast cancer risk by as much as 40 percent versus those who move at moderate levels for three to four hours a week, Dr. Funk adds. But don’t think you have to spend loads of time exercising. Even walking briskly for just 11 minutes a day can drop breast cancer incidence by 18 percent, she says. Not into sweat? No problem. “Simply strive to move more throughout the day with the goal of five hours a week,” Funk says. For instance, take a walk at lunch, use a desk treadmill while you work, or do jumping jacks during commercial breaks.

If you see anything unusual in your breasts, talk with your doctor. “No one will think you’re paranoid, and most times we discover noncancerous reasons behind the signs,” Dr. Funk says. Signs of something off kilter include a new lump, swelling in the breast, skin dimpling (like an orange peel), nipple discharge (that’s not milk), swollen lymph nodes, breast or nipple pain, nipple retraction (turning inward), and nipple or breast skin that’s flaking, dry, red, or thickened.