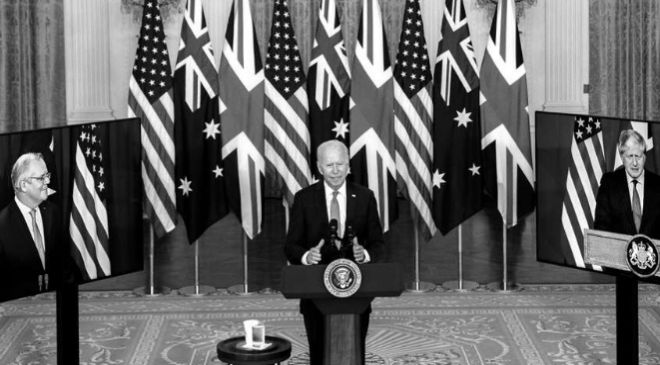 After the fall of Kabul last month, many observers of U.S. foreign policy concluded that America had lost interest in its allies, and that its allies had lost faith in America.

An important development in Asia, however, serves as a powerful rebuttal of both arguments.

The conventional wisdom in August was that Washington was no longer a reliable partner and that allies’ trust had been destroyed by the manner of its withdrawal from Afghanistan. One unnamed former British intelligence officer, for example, opined to a reporter that the chaotic close to the Afghanistan mission marked “the end of an era of Western liberalism & democracy that started with the fall of the Berlin Wall.”

Conservatives in particular were quick to write off President Joe Biden. Commentators who had supported the mad non sequitur of George W. Bush’s Iraq War and endorsed the election of the appalling Donald Trump now claimed that Biden’s withdrawal, after the U.S.’s 20-year commitment to Afghanistan, had shattered their confidence in America.

This response was disproportionate and ahistorical. It demonstrated what the Australian strategist Owen Harries called “the parochialism of the present.”

And the announcement last week of the Australia-U.K.-U.S. defense pact, or AUKUS—which promises closer military and scientific ties among the three countries and the development of a nuclear-powered Australian submarine fleet—is a reminder of the enduring potency of America’s network of alliances.

The U.S. will remain the richest and most powerful country for years to come, the only nation capable of projecting military force anywhere on Earth. Washington can’t get everything it wants, but American power still has no substitute.

Most U.S. allies understand this. Take the Australian case: For seven decades, Australia has found the U.S. to be a powerful and reliable ally. The two countries have fought beside each other in every major conflict of the 20th and 21st centuries.

Yet there has always been a lively domestic debate about America. Australia’s participation in the Iraq War alongside American forces was unpopular. The unimpressive U.S. response to the coronavirus pandemic made Australians worried, and President Trump’s behavior made them heartsick.

Still, support for the U.S. alliance has been one of the most consistent results over nearly two decades of polling by the Lowy Institute, which I lead.

Australian soldiers fought in Afghanistan for many years, so August was a difficult month. But the American withdrawal didn’t change Canberra’s calculus when it came to signing up for AUKUS.

A lot of this has to do with Australia’s relationship with China. In recent years, Canberra has faced increasing pressure from Beijing. This includes trade sanctions imposed to punish Australia for the sin of calling for an independent international investigation into the origins of the coronavirus.

In response, Australia has bolstered its domestic resilience, increased its defense spending, and thickened its connections with other regional powers, including India, Japan, and Indonesia.

This has not been uniformly welcomed at home: Some have long argued that Australia should do more to accommodate Beijing’s rise. But public opinion toward China has hardened, in tandem with Chinese behavior. A Lowy Institute poll this year found that, for the first time, more Australians see China as a security threat than an economic partner. Trust in China has fallen precipitously, with only 16 percent of Australians saying they trust China “a great deal” or “somewhat” to act responsibly in the world, down from 52 percent three years ago.

Now, with AUKUS, Australia is doubling down on its old alliance with the U.S. while also drawing the United Kingdom more deeply into the Indo-Pacific. This is an ambitious step for Australia, a signal that the country intends to shape its external environment and contribute to the regional balance of power. Washington seeks to strengthen Australia’s capabilities, as well as the shared sense of solidarity felt by the three allies. For its part, London will tender the pact as evidence of Britain’s global standing and ambition. With this deal, all three countries are betting on one another’s reliability over the long term.

For Australia, the deal offers great opportunities but also carries risks. Nuclear-powered submarines provide immense capability in terms of lethality, speed, range, and stealth. These boats will give Australia significant deterrent power. Yet AUKUS will anger China, which remains Australia’s largest trading partner. Beijing will worry about what it means for the tightening of U.S. alliances in Asia more generally. If Chinese leaders were given to self-reflection, they would realize that this deal was, in fact, made in China.

Australia will need to demonstrate that this move is not escalatory, that it contributes to regional stability, and that it accords with Australia’s commitment to the rules-based order, especially the nuclear Non-Proliferation Treaty. Canberra must increase its investment in diplomacy as well as defense—and in new relationships as well as old ones. For Australia, the Anglosphere is necessary but not sufficient.

The pact has infuriated France, which has lost a prized contract to build conventionally powered submarines for Australia and recalled its ambassadors to the U.S. and Australia in protest. The French contract was a troubled one, but the Australian government ought to have shown more grace in the manner of its withdrawal from it. Washington and Canberra should move to assuage the anger felt in Paris. France is an important Indo-Pacific power in its own right, and a key advocate of European involvement in the region.

AUKUS is a head-snapping development. The sharing of nuclear secrets between sovereign nations is as intimate as international relations gets. It may not be replicated with other U.S. allies for a long time, if ever.

But Australia is far from the only Asian power looking to do more with Washington. At the White House this week, Biden will host the first in-person leaders summit of the Quad countries: the U.S., Australia, India, and Japan, the last two of whom seem comfortable with AUKUS. And while some Southeast Asian countries have registered concerns over the new pact, others are supportive.

Indeed for most Asian countries, the U.S. remains an invaluable partner. Its formidable forward presence brings balance to the Indo-Pacific. Few want the region to be dominated by an aggressive China. No one wants to live in another’s shadow. Most prefer a balance of forces, with a general acceptance of international norms and the rule of law, along with the long-term presence of America.

August was hard and harrowing for the U.S. and its friends. But the world’s judgment of America’s staying power was premature. In September, things are looking brighter.