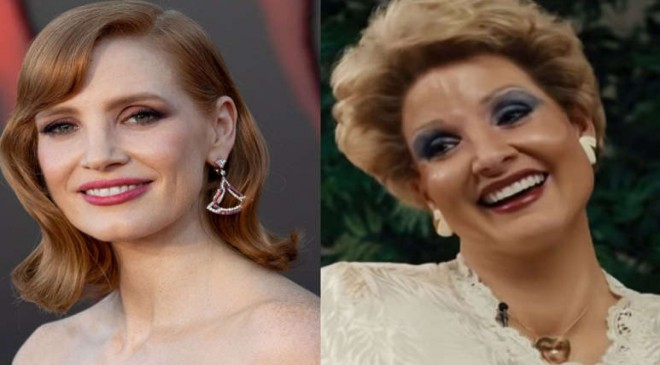 Jessica Chastain’s physical transformation into Tammy Faye Bakker for the upcoming biopic “The Eyes of Tammy Faye” took an irreparable toll on the actress’ body, she told The Los Angeles Times on Monday.

In order to channel the televangelist, who died in 2007 following a decade-long battle with colon cancer, Chastain covered herself with the dark bronzer and thick foundation characteristic of Tammy’s late-’90s style.

“I think for sure I’ve done some permanent damage to my skin on this,” she said.

Chastain continued, “Listen, I eat very pure and I take very good care of my skin and I stay out of the sun and all that stuff. But it’s heavy. And when you’re wearing it all day every day – the weight of it on your body, it stretches your skin out.”

The Oscar-nominated actress, 44, purchased the rights to Randy Barbato and Fenton Bailey’s 2000 documentary about Tammy in 2012. She spent the next decade studying archival footage and YouTube videos of Tammy in the hopes of one day playing her.

Prepared or not, Chastain “freaked out” when she saw herself in full hair and makeup during the first screen test.

“I was like, ‘I don’t know how to act like this.’ People think it’s easier, but it’s not. You have to reach through the makeup – you can’t let the makeup be the performance,” she explained.

Chastain, also a producer on the Michael Showalter-directed film, worried that the cosmetics would keep her from tapping into the character’s emotional side but said she “just had to get used to it,” especially since Tammy’s makeup only gets heavier as she ages in the film.

The longest transformation took 7 1/2 hours, Chastain recalled. She showed up to set “panicky” and had “hot flashes” as a result of the “heavy and hot” makeup coating her body. By the time the cameras started rolling, she had “no energy left.”

“It was like going on a long-distance flight every day. Because if it takes 7 ½ hours to put on, it’s going to take at least two hours to get off. It was concerning to me. I was worried about my circulation,” she said.

When Chastain removed the prosthetics and makeup, she said she looked “50 years old.”

The Eyes of Tammy Faye” premieres in theaters on September 17.