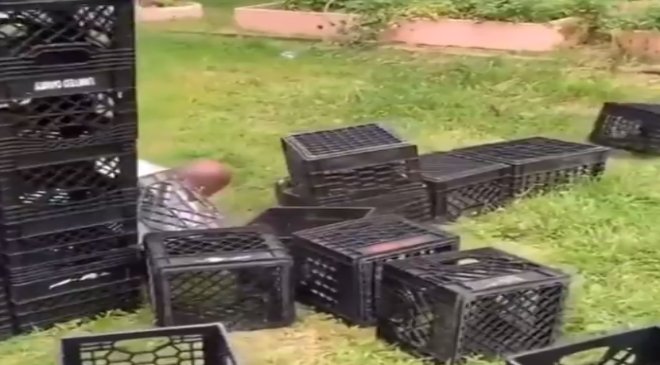 But experts warn the unsafe trend, coupled with the overcrowding of U.S. emergency rooms due to COVID-19, could be a disaster waiting to happen.

What is the Milk Crate Challenge?

The Milk Crate Challenge calls for stacking milk crates in the shape of a pyramid and successfully walking up one side and down the other.

The virality of the challenge has emerged from the often catastrophic results.

“The Milk Crate Challenge is very dangerous, and we are seeing many orthopedic injuries as a result of the falls,” Dr. Shawn Anthony, an orthopedic surgeon specializing in sports medicine at Mount Sinai in New York, told TODAY Parents. “Injuries can include broken wrists, shoulder dislocations, ACL and meniscus tears, as well as life-threatening conditions like spinal cord injuries.”

“Emergency rooms across the country are already overcrowded and elective surgeries are being delayed or postponed due to lack of hospital beds,” he told TODAY. “This social medial challenge puts unnecessary additional stress on our health system and health care providers.”

Anthony isn’t the only doctor taking notice of the dangerous trend.

George Gantsoudes, a pediatric orthopedic surgeon in Virginia tweeted a warning alongside an example of the challenge gone horribly wrong.

“The orthopaedic (sic) surgeries required to fix problems caused by this may fall under the umbrella of ‘elective surgeries’,” he said. “Might not want to tempt the trauma gods if you live south of the Mason-Dixon.”

It’s not the first time an unsafe social media challenge has surfaced during the coronavirus pandemic.

Earlier this year, a mom in the U.K. said her daughter swallowed 15 magnetic beads while following a new “fake piercing” challenge on TikTok.

“She’s got part of her bowel removed … it was like two segments of it, so they had to re-stitch it back,” Faye Elizabeth explained of her daughter’s emergency surgery. “They also found magnets inside her appendix, so they had to remove her appendix as well. She’s now left with just over a 6-inch scar down her stomach.”

“Our family is devastated beyond belief by Joshua’s circumstance,” the family said in a GoFundMe update at the time. “We are also concerned for other families who like ourselves may not be aware of the existence of the Blackout Challenge and others like it. … We urge the community to (spread) awareness about Joshua and the real risks involved in not having knowledge of what kinds of activities children are involved in.”