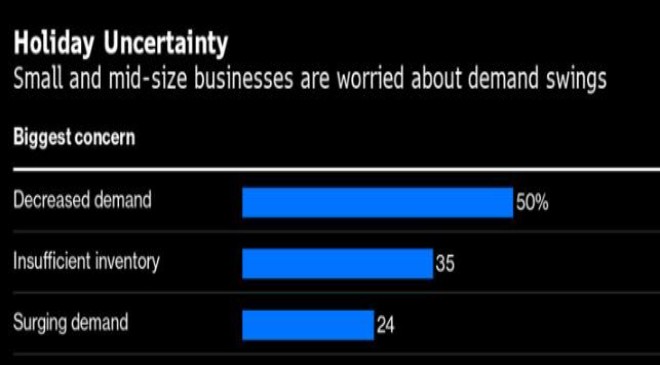 (Bloomberg) — With so much uncertainty about consumer spending this holiday season, anxiety among US small business owners is reaching new highs.

Also Read – These Will Be the Strongest U.S. Housing Markets in 2023, According to Realtor.com

Recent data and surveys show how difficult it’s become to make any forecast about demand amid decades-high inflation:Inventory management is the top concern for a quarter of small firms in an American Express Co. report.The share of businesses that can make forecasts over more than a year dropped to 16.5% in a Census Bureau survey released this week, down almost 3 percentage points since July.About 85% of respondents were worried about a swing in demand, either up or down, impacting sales or inventory, in a survey by freight-booking service Freightos.

“Nobody quite knows how consumers are going to be shopping this Christmas,” said Freightos Chief Executive Officer Zvi Schreiber. “Are they going to spend less because of inflation, because prices are high? Or are they going to spend more because the job market is robust? There’s just a lot of contradictory data around.”

Ministry of Supply Inc., a Boston-based business apparel company, scaled back its seasonal offerings and produced more colors of flagship clothes to minimize the uncertainty.

The goal is “to avoid the risk of another year of having to play the shell game on ‘where do I put these inventories?’” said co-founder and CEO Aman Advani. “We want to enter next year with a really clean, beautiful slate and ability to make a wider array of decisions.”

Smaller companies and local shops were hit the hardest at the height of the pandemic, disappearing by the thousands in its early months. In response to the carnage, the federal government spent hundreds of billions of dollars to keep them afloat, while many consumers made an effort to support neighborhood businesses.

But this year inflation is taking a toll on that solidarity, which helped lift holiday sales in 2020 and 2021. About three in four Americans say inflation and the current state of the economy make it hard for them to support small businesses, according to a survey by MUFG Union Bank NA.

Separate data out Friday showed US consumer sentiment improved in early December, bolstered by cheaper gas prices. While that helped lower near-term inflation expectations, longer-term views held steady, according to a survey from the University of Michigan.

“Varying economic conditions have left consumers dazed and confused,” Wells Fargo & Co. economists Tim Quinlan and Shannon Seery said in a note. “Despite expecting joblessness to rise, consumers also expect income to go up; even as the Fed raises rates, consumers expect rates to go down.”

So far American consumers have proved resilient in the face of higher prices and rising borrowing costs.

Katina Mountanos, for one, is optimistic. The founder and CEO of New York-based Kosterina, a premium olive oil brand, anticipated that holiday sales would double this year and planned her inventory accordingly. So far she’s not only met her projections, she even surpassed them slightly.

Also Read – Here’s how to crush your small business competitors

“We’ve been having a really great holiday season,” Mountanos said.

–With assistance from Olivia Rockeman, Daniela Sirtori-Cortina and Molly Smith.