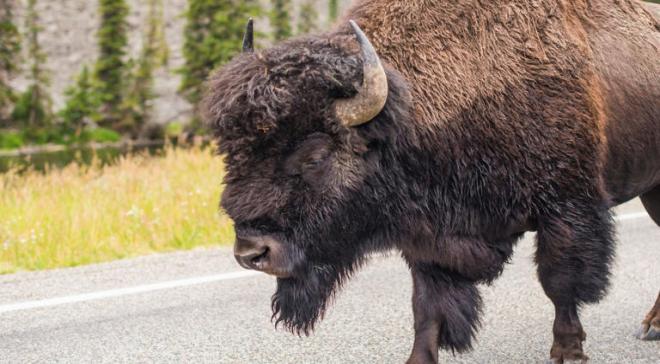 Ayoung woman has been caught on camera sitting on a boardwalk at Yellowstone National Park, smoothing her hair and taking a selfie while making a peace sign – all right in front of one of the park’s thousands of wild bison.

The video was recorded by Instagram user ms.meganw (private account) and shared via TouronsOfYellowstone – an account that highlights bad behavior at US National Parks and other sites of natural beauty, often involving wildlife.

“The video really doesn’t show how close they were,” said the witness. “The bison started to stand while they were sitting next to it and I thought we were really going to get a show but no. Idiots.”

This time the bison remained calm, but not everyone who gets too close is so lucky. In fact, according to the National Park Service, bison are responsible for more injuries at Yellowstone than any other animal, including snakes and bears.

Last month, a woman hiking in Custer State Park, Texas, was gored by a bison when she strayed too close. Rather than taking a detour, Rebecca Clark decided to try to sneak past a group of the animals grazing beside the trail she was following. She had nearly passed when one animal charged, tossing her to the ground and seriously injuring her back.

In 2020, another visitor was injured at the same park after getting too close while photographing a herd of bison. In a video that went viral earlier this year, the woman sat down among the herd and was attacked by a bull that caught her pants in its horns and eventually pulled them right off.

Members of the public are advised to always stay at least 25 yards (23 meters) away from bison and elk. If you’re not sure, try closing one eye, holding your arm out and giving the animal a thumbs up. If you’re able to cover the creature with your thumb, you are a safe distance away. If not, you should back up to a safer distance.