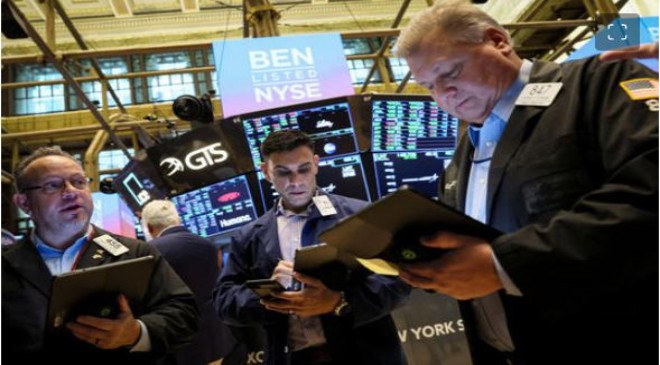 (Reuters) – The S&P 500 fell on Wednesday as a grim outlook from Target spurred fresh concerns about retailers heading into the crucial holiday season, while semiconductor shares slumped broadly after Micron’s supply cut.

Shares of Target Corp tumbled after the big-box retailer forecast a surprise drop in holiday-quarter sales.

Micron Technology shares dropped after the company said it would reduce memory chip supply and make more cuts to its capital spending plan. The S&P 500 information technology sector and the Philadelphia SE Semiconductor index both sank.

“The biggest sector issue is Target’s earnings and what that means for retail and consumer spending in general. I think that has kind of set the tone for the market,” said Chuck Carlson, chief executive officer at Horizon Investment Services in Hammond, Indiana.

The Micron news “is certainly causing some tech investors to take some of these short term profits off the table because it still appears like the fundamentals are still not great in the tech space,” Carlson said.

Gains in defensive areas such as utilities and consumer staples helped mitigate the S&P 500’s losses.

Despite the sales warning from Target, data showed U.S. retail sales increased more than expected in October as households stepped up purchases of motor vehicles, suggesting consumer spending picked up early in the fourth quarter.

Stocks had staged a big rally over the past month, after softer-than-expected inflation data raised hopes the Federal Reserve could get less aggressive with interest rate hikes.

“The market had seen a good run-up from those lows and had continued to move higher,” said George Catrambone, head of Americas trading at DWS Group. “The market has a lot to think about and digest as we get into year end.”

Investors also had their eyes on geopolitical tensions. A missile that hit Poland was probably a stray fired by Ukraine’s air defenses and not a Russian strike, Poland and NATO said, easing global concern that the war in Ukraine could spill across the border.