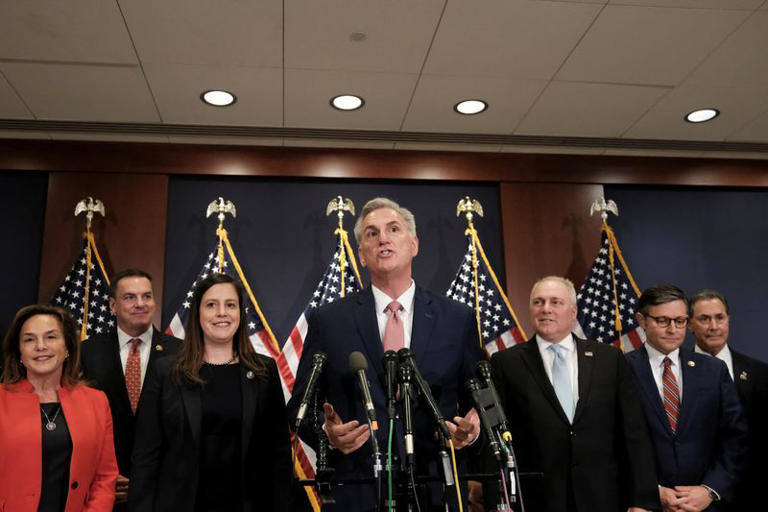 WASHINGTON (Reuters) – Republicans were just one seat shy on Wednesday of securing a majority in the U.S. House of Representatives, a midterm victory that would usher in two years of divided government after President Joe Biden’s Democrats retained control of the Senate.

The final outcome in the House hangs on tight races in states including California, with thousands of votes still being counted. Republicans have won 217 seats compared with the Democrats’ 209, Edison Research projected, with 218 needed for a majority.

There were only nine uncalled House contests by early Wednesday, with Republicans ahead in four, according to a Reuters compilation of the leading nonpartisan forecasters.

An anticipated narrow win for Republicans would fall far short of the “red wave” of gains they had predicted for the Nov. 8 vote, with some in the party blaming former President Donald Trump for the disappointing showing.

Trump, who backed candidates who promoted his baseless attacks on the integrity of U.S. voting but ultimately lost in key races, launched a bid on Tuesday to regain the presidency in 2024, aiming to pre-empt potential Republican opponents.

Democrats portrayed their win of the Senate in part as a rejection of candidates who echoed Trump’s false claims that the 2020 election, which Biden won, was stolen from him through widespread voting fraud.

But a divided Congress would limit Biden’s power in Washington and make it difficult for him to advance his agenda.

In retaliation for two impeachment efforts by Democrats against Trump, House Republicans have vowed to investigate Biden administration officials and past dealings by the president’s son, Hunter Biden, with countries including China.

They have also publicly talked about seeking cost savings in the Social Security and Medicare safety-net programs, and making permanent 2017-enacted tax cuts that are due to expire. Biden is seeking to expand social programs and raise taxes on the rich.

Biden has signaled he expects Republicans to cooperate with his administration.

“The American people have made clear, I think, that they expect Republicans to be prepared to work with me as well,” he told a news conference last week.

Republicans’ agenda could be scuttled by the Senate, where Democrats retained control after wins in the swing states of Arizona and Nevada, as well as by Biden’s veto power over legislation.

In the House, Republican Leader Kevin McCarthy in a closed-door caucus vote held off a challenge by hard-line conservative Representative Andy Biggs on Tuesday and will be the party’s nominee for chamber speaker, if Republicans win the majority.

As House speaker, McCarthy would be second in line of succession for the presidency after the vice president when Congress convenes in January.

The speaker, elected by the entire House, sets the unwieldy chamber’s legislative agenda and the political tone of the party in power. If successful in his election bid for the speaker’s chair, McCarthy would succeed Democrat Nancy Pelosi.