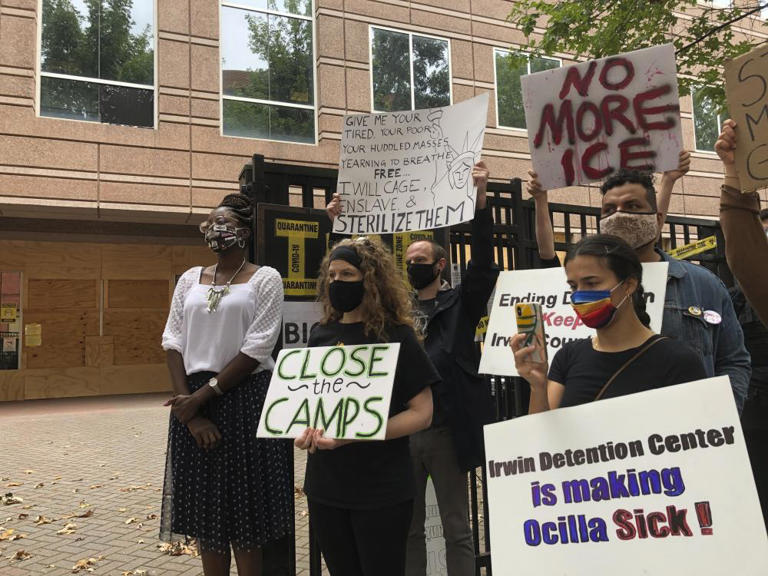 AUS Senate investigation into allegations that unwanted medical procedures were performed on detained female immigrants in Georgia has uncovered “a catastrophic failure by the federal government” to protect the detainees.

A Senate hearing on Tuesday by the bipartisan permanent subcommittee on investigations (PSI), chaired by Georgia senator Jon Ossoff, announced its findings on conditions and practices at the Irwin county detention center (ICDC).

The ICDC, located in Ocilla, Georgia, housed detainees who shared accounts of poor treatment including gynecological procedures that were “excessive, invasive and often unnecessary”. An account of what was occurring at the ICDC first came to light when Dawn Wooten, a nurse at the facility, acted as a whistlhttps://www.msn.com/en-us/news/world/us-senate-investigates-catastrophic-failure-to-protect-female-migrant-detainees/ar-AA149wkd?cvid=a228e4d0effc42df87bf6b97e71e4b19eblower.

Ossoff called the alleged unnecessary and sometimes non-consensual medical treatment and procedures disclosed in the 18-month-long investigation “nightmarish and disgraceful”.

Ossoff said: “This is an extraordinarily disturbing finding, and in my view represents a catastrophic failure by the federal government to respect basic human rights.”

The detention center, along with Dr Mahendra Amin – its primary medical provider from 2014 to 2020 – were the subjects of the subcommittee’s investigation. According to the PSI’s investigation, the US government and Department of Homeland Security did not fully vet Amin beyond confirming that he was a licensed doctor affiliated with an accredited hospital.

The alleged unnecessary treatment and procedures performed by Amin detailed by the committee’s report include laparoscopies to excise lesions, hormonal birth control injections, pelvic exams and a procedure often used for abortions or miscarriages known as “dilation and curettage”, which involves the surgical removal of part of the uterus’s lining and the widening of the cervix.

The Senate subcommittee sought an interview with Amin and issued a subpoena when he declined. He invoked his fifth amendment right, which protects against self-incrimination.

In December 2020, former ICDC detainees filed a class action lawsuit against the facility, ICE, Amin, the Irwin county hospital and other federal and nonfederal parties for medical mistreatment. The plaintiffs are seeking $5 million in damages and litigation is ongoing.

In the hearing, former ICDC detainee Karina Cisneros Preciado, 23, testified that she was subjected to unsanitary conditions at the facility. Cisneros Preciado was arrested after calling the police when she said she was being abused by the father of her children. The charges were ultimately dropped.

In her testimony, Cisneros Preciado detailed a time when she sought postpartum care in the ICDC and was allegedly handcuffed and given an injection of Depo-Provera, a type of birth control and hormonal medication, for a newly discovered ovarian cyst.

She said: “When Dr Amin comes in, he doesn’t acknowledge me. He doesn’t say a word. He just sits in front of me and starts prepping for the procedure, which he does not explain.”

“Then, he just says ‘Open your legs’ and continues with ‘It’s gonna be cold,’ and inserts a white tube inside of me. He wiggles it around roughly. It was extremely uncomfortable.”

The report also details the harrowing account of another unnamed woman who was detained in the ICDC in 2020. The detainee describes how Amin allegedly removed a portion of her fallopian tube, a result of a dilation and curettage procedure she was not made aware of, and how Amin told her “she would never be able to have children naturally again”.

It’s not the first time Amin was accused of medical mistreatment. In 2013, he was sued by the US Department of Justice and the state of Georgia. The lawsuit alleged Amin committed Medicaid fraud by violating the Federal Anti-Kickback Statute and Georgia Medicaid policy by conducting unnecessary gynecological procedures.

The justice department also alleged Amin maintained “standing orders” requiring nurses to perform treatment on pregnant women “regardless of their condition and without an evaluation from a physician”.