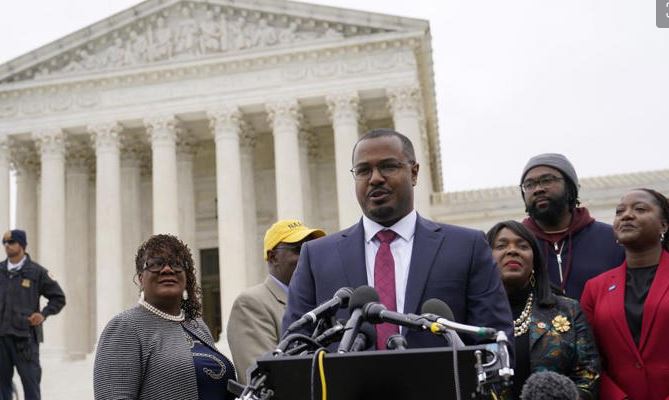 The case, Merrill v Milligan, centers on how much those who draw electoral districts should be required to consider race. It involves a dispute over the seven congressional districts Alabama drew last year. Only one of those districts has a majority-Black population, even though Black people make up a quarter of Alabama’s population. Earlier this year, a three-judge panel unanimously ruled that the configuration was illegal under section 2 of the Voting Rights Act, which guarantees minority groups equal opportunity to participate in the electoral process. It ordered Alabama to draw a second district with a minority population. The supreme court stepped in earlier this year and halted that order while the case proceeded.

The state’s solicitor general, Edmund LaCour, argued on Tuesday that the lower court’s ruling was incorrect because it required Alabama to consider race above traditional, race-neutral criteria. In order to require Alabama draw a second majority-minority district, he said, the plaintiffs should have first had to prove that such a map could exist without taking race into account at all. He argued that computer simulations programmed with race-neutral criteria never produced a map with a second majority-Black district.

Justice Samuel Alito, one of the court’s most conservative jurists, seized on that point repeatedly in support of Alabama’s argument. “How can it be reasonably configured if you can’t get that map with a computer simulation that takes into account all of the traditional race-neutral factors?” he said.

But even Alito acknowledged that some of the arguments Alabama made were “far-reaching”. Justice Amy Coney Barrett, another conservative justice, said at one point she would be “struggling in the same way others have about narrowing down exactly what your argument is”.

Justices Elena Kagan, Sonia Sotomayor and Ketanji Brown Jackson all seemed deeply skeptical about all of Alabama’s arguments. Embracing the state’s approach would upend how the court has long approached section 2 redistricting cases. Kagan said the case was a “slam dunk” case under the court’s existing precedent before laying out how she believed the lower court had correctly evaluated the facts. “It seems to me you’re coming here … and saying change the way we look at section 2 and its application,” she said.

The supreme court has long allowed for the use of race and required those who challenge maps to meet a difficult three-part test to challenge the map. The first part of that test requires plaintiffs to show that the minority population is sufficiently large and compact enough to comprise a majority in a reasonably configured single-member district.

“There is nothing race-neutral about Alabama’s map,” Deuel Ross, a lawyer who represented some of the plaintiffs, told the justices. “Section 2 is not an intent test or about putting on racial blinders.”

Requiring plaintiffs to draw that map without considering race at all would have profound consequences for Black representation across the US. It would make it much harder for plaintiffs to bring challenges to maps, essentially requiring them to show that discrimination is occurring without looking at race.

“Alabama isn’t asking the court to apply section 2 as it’s been applied for the last 40 years,” said Elizabeth Prelogar, the United States solicitor general, which backed the plaintiffs in the case. “Instead, Alabama is asking the court to radically change the law by inserting this concept of race neutrality and effectively limiting section 2 to intentional discrimination.”

The case marks the latest occasion in which the court has considered the Voting Rights Act, a crowning achievement of the civil rights era. In 2013, the court gutted a provision in the law that required states and other jurisdictions with a history of discrimination to get federal approval before enacting changes. In 2020, the justices made it harder to use section 2 to bring challenges to voting laws outside of redistricting.

Kagan acknowledged that history of chipping away at the law on Tuesday. After calling the Voting Rights Act “one of the great achievements of American democracy”, she said: “In recent years, this statute has fared not well in this court.”

“You’re asking us, essentially, to cut back substantially on our 40 years of precedent and to make this too extremely difficult to prevail on. So what’s left?” she said in a comment that appeared to be directed more at her colleagues on the bench than any of the lawyers.

Some of the most pointed and extensive questioning on Tuesday came from Jackson, the newest member of the court, who was participating in just her second day of oral arguments. She directly challenged LaCour’s argument that the prohibition against racial discrimination in the constitution’s 14th amendment does not allow mapmakers to consider race in redistricting.

But Jackson questioned how that could be the case when history shows that the 14th amendment was adopted as part of a race-conscious effort to guarantee equal rights for Black Americans in the 19th century. “I don’t think that the historical record establishes that the founders believed race neutrality or race blindness was required,” she said, in what seemed to be an appeal to conservative originalists on the court. “It was drafted to give a foundational, a constitutional foundation for a piece of legislation that was designed to make people who had less opportunity and less rights equal to white citizens.