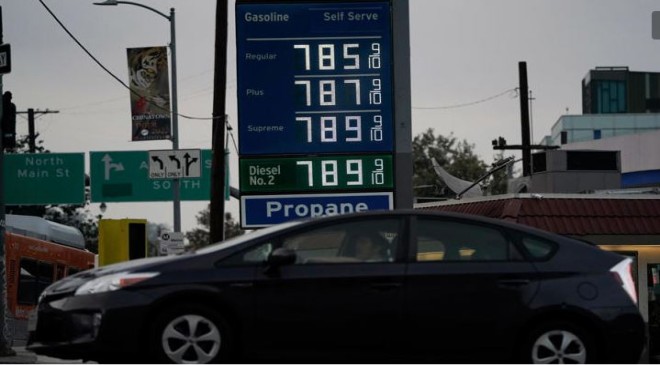 Gas prices hit record highs in many parts of California on Wednesday, with greater Los Angeles seeing an unprecedented average of $6.49 per gallon for regular. Prices in some southern California locations spiked at more than $8.00 per gallon.

But experts said Golden State drivers whose tanks aren’t near empty may want to hold off on filling up, because relief may be on the way.

Statewide, prices reached $6.42 per gallon, up a penny from the day before, and just under the record average of $6.44 set June 14. That’s nearly $3 higher than the national average of $3.83, according to AAA.

By midday, however, there was good news: Wholesale spot prices for gasoline sold by refineries and others in the Golden State dropped by as much as $1.25 per gallon off recent highs and could fall further, said industry analyst Patrick De Haanwith GasBuddy, which tracks oil and gas markets.

De Haan told USA TODAY that the single biggest factor contributing to the decline was likely California Gov. Gavin Newsom on Friday directing state air regulators to allow oil refineries to immediately switch to producing cheaper “winter blend” gasoline a month earlier than normal. A costlier “summer blend” of gasoline that produces less dangerous smog when it mixes with hot summer sunshine is normally required in California from May until the end of October.

But, he added: “While this is welcome relief, we’re still focused on getting answers for this unprecedented price spike.”

While some gas stations might drop retail prices as soon as Wednesday night, De Haan said more widespread declines would likely occur over the weekend, as owners and operators first use up the higher-priced supply in their tanks, then fill them over the next few days with the lower-priced supply.

There was no immediate relief evident for consumers at the pump yet. In Riverside County, east of Los Angeles, prices hit a record average high of $6.37 per gallon Wednesday, up a penny from the day before, according to AAA’s daily tracker and a regional spokesman.

All through September, prices shot up, “skyrocketing by as much as much as 10 to 15 cents a day during the last week of September,” said Doug Shupe, spokesman for the Automobile Club of Southern California, which is AAA’s largest member group.

“This week we have not seen near the rate of increase, but they do still continue to rise,” he said.

“This degree of divergence from national prices hasn’t happened before,

regardless of planned or unplanned refinery maintenance, and no explanation

has been provided. The oil industry owes Californians answers,” he said.

On Wednesday, as prices fell, he said in a written statement, “Now, even though the price of oil has decreased to $90 per barrel, today the average gas price at the pump has surged to $6.43.”

Many Californians straining under high gas prices will get a shot in their pocketbooks this month.

Even as inflation has surged, California has seen a substantial budget surplus. Newsom pushed for and won rebates for many Californians in this year’s budget package, with direct deposits expected to start showing up in accounts of those who file their taxes electronically within the next few weeks. Others will receive checks in the mail. Payments range from $200 for single people to over $1,050 for some families, depending on income levels and other factors.

And California will not likely be hit hard by OPEC’s declaration on Wednesday that it will tighten supply, with cargo ships loaded with gasoline products from other countries set to arrive in coming days and weeks at ports along the West Coast, Shupe and De Haan said. That could bring relief to Oregon and Washington state drivers, too.