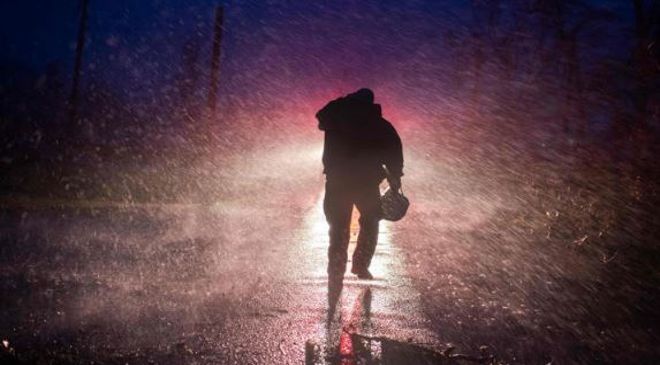 Early on Monday, Hurricane Ian was a tropical storm with heavy rain and winds of at least 73 miles per hour. But experts say the storm is gaining power rapidly and, if recent history is any guide, it could intensify dangerously as it nears Cuba as soon as Monday night.

Here are key facts about how climate change can rapidly intensify tropical storms.

More than 90 percent of the excess heat from human-caused global warming over the past 50 years has been absorbed by the oceans. Since 1901, sea surface temperatures have risen an average of 0.14 degrees Fahrenheit per decade, according to data from the National Oceanic and Atmospheric Administration.

That’s crucial, because storms gather strength over the ocean. And, the warmer the water, the more power they pick up. Higher surface temperatures allow hurricanes to reach higher levels of maximum sustained wind, a common metric used to describe the intensity of a storm.

“The occurrence of more intense storms is something we are very confident about,” said Suzana J. Camargo, a hurricane expert and professor at Columbia University’s Lamont-Doherty Earth Observatory.

A 2020 satellite image analysis showed that the likelihood of a hurricane strengthening into a Category 3 storm or higher, with sustained winds above 110 miles per hour, has increased by about 8 percent a decade since 1979.

Not only do warmer oceans make storms stronger, they make the rate of intensification more rapid, said Kerry A. Emanuel, a meteorologist and hurricane expert at the Massachusetts Institute of Technology.

Rapid intensification technically refers to an increase of at least 30 knots, or 35 m.p.h., in the maximum sustained winds over a 24-hour period, according to the National Hurricane Center. Researchers have found that the likelihood of a hurricane undergoing rapid intensification has increased to 5 percent from 1 percent since the 1980s.

Dr. Emanuel said on Monday morning that current conditions were “ideal” for Ian to follow a similar path of development.

Several elements other than ocean temperatures affect hurricanes, and scientists are less certain about other climate effects.

One of those elements is vertical wind shear, or a measure of how much the wind changes in speed or direction at increasing heights in the atmosphere. Strong vertical wind shear can inhibit the development of hurricanes by tilting the structure of a storm and by forcing cool, dry air into its core. “It’s like pouring cold water on a fire,” Dr. Emanuel said.

However, the study’s findings were localized; different effects of warming on wind shear could be observed globally, said Dr. Camargo, one of the authors of the study.

The increase in the number of hurricanes that intensify quickly and unpredictably presents a sticky problem for forecasters, whose assessments can affect a community’s preparedness.

The window of time to make a decision gets smaller, Dr. Emanuel said. For example, if officials, working with forecasters, issue an evacuation order too early, then they risk unnecessarily sending hundreds of thousands, and sometimes millions, scrambling, jamming highways and snarling transit systems. In some cases, that could be more dangerous, disruptive and costly than staying in place.

“Then, you’ve cried wolf,” Dr. Emanuel said. The next time the warning to evacuate goes out, people might not listen.

Make the call too late, though, and there’s no time for people to escape the impacts of a dangerously strong hurricane.

“It’s a forecaster’s worst nightmare,” Dr. Emanuel said, for a relatively weak hurricane to develop into a Category 4 or 5 hurricane overnight.