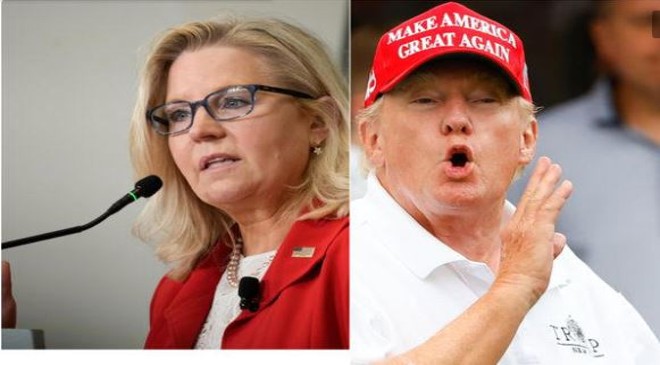 Rep. Liz Cheney (R-Wyo.) confirmed one of the worst-kept secrets in Washington: Some Republican lawmakers who publicly support former President Donald Trump take a very different view behind the scenes.

She saw an example of it on Jan. 6, 2021, just hours before Trump supporters broke into the U.S. Capitol in a failed attempt to block the certification of the 2020 election and keep him in power.

During an event on Monday at the American Enterprise Institute, Cheney recalled being in the House cloakroom and working on some remarks when she spotted a pile of papers for lawmakers to sign if they planned to object to the election’s results.

“And as I was sitting there, a member came in and he signed his name on each one of the states’ sheets,” Cheney recalled. “And then he said under his breath, ‘The things we do for the Orange Jesus.’”

Some in the audience chuckled, but Cheney didn’t seem amused.

“I thought, you know, you’re taking an act that is unconstitutional,” she said.

Cheney, who sits on the committee investigating the Jan. 6 assault, also called out her fellow Republicans for continuing to defend Trump and make excuses for him.

“Bit by bit, excuse by excuse, we’re putting Donald Trump above the law,” she said, per NBC News. “We are rendering indefensible conduct normal, legal and appropriate — as though he were a king.”

Cheney’s opposition to Trump cost her a leadership role in the House GOP conference earlier this year, and led to her primary loss last month to a Trump-backed candidate.