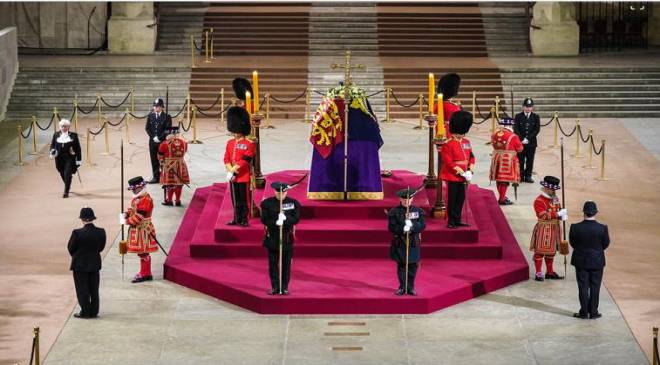 The epic line of devoted mourners has dissipated. A week of back-to-back ceremonies will conclude. The country will return to normal life, albeit without its beloved monarch. And Queen Elizabeth II will be laid to rest next to her husband, Prince Philip.

The state funeral for the United Kingdom’s longest serving monarch — whose reign spanned 70 years, from the aftermath of World War II and the dawning space race to the ubiquity of the internet — will not only bid farewell to a much-loved leader but cement the rule of its new one, King Charles III.

Ceremonies will play out on grand scale. Some 4,000 military personnel will parade on the streets of London and Windsor. Tens if not hundreds of thousands are expected to line the streets, and inside Westminster Abbey, the guest list will include leaders like American President Joe Biden and France’s Emmanuel Macron, other European royals, as well as British doctors and other emergency workers.

Around the world, billions will watch on TV, possibly making it the most viewed live broadcast in history if audiences surpass the 2.5 billion estimated to have seen Princess Diana’s funeral in 1997.

Monday’s packed schedule has already begun. At 6:30 a.m. (1:30 a.m. ET) the last members of the public were allowed into Westminster Hall to see Elizabeth’s coffin lying-in-state. The hall, which was built more than 1,000 years ago, has now been closed in preparation for the grandest funeral in British living memory.

But it is the intimate remembrances and images that have touched so many.

“It was incredible to be able to come and to be here and to just pay my respects,” said Sima Mansouri, 55, one of the last two members of the public allowed into the lying in state in Westminster Hall. “I’ve adored her since I was a little girl. I moved from the Middle East to the U.S. and then to the United Kingdom for the past 25 years. … I call this place home and she made me feel like I was at home here, and safe.”

Just after the doors of ancient Westminster Hall closed, those of nearby Westminster Abbey opened — the start of an event few will have seen the likes of before.

The event will attempt to “unite people across the globe and resonate with people of all faiths,” as put this week by the Earl Marshall, the Duke of Norfolk, the hereditary official in charge of organizing British state funerals.

Shortly after 10:35 a.m. (5:35 a.m. ET), the queen’s coffin will be lifted from its platform, known as a catafalque, by members of the British Army’s Grenadier Guards, the iconic soldiers whose tall, black busby hats appeared in a million tourist photographs outside Buckingham Palace.

They will place it on a Royal Navy gun carriage, which was removed from active military service in 1901 to be used for the funeral of Queen Victoria. From Westminster Hall, it will be taken in a procession to Westminster Abbey, just across Parliament Square, for the state funeral. It’s a journey of barely 500 feet but will be conducted at such a solemn pace that it will take 8 minutes.

The square will be lined with soldiers from different companies and squadrons. The procession itself will be led by some 200 pipers and drummers from Scottish and Irish regiments, as well as Gurkhas —Nepalese fighters who traditionally have fought alongside British troops — and the Royal Air Force.

Flanking the coffin will be the pallbearers and royal bodyguards, and walking behind will be King Charles III; Camilla, the Queen Consort; and other frontline royals.

The coffin will then be carried into the abbey for the funeral.

The exact guest list has not been published, but the hall’s capacity is 2,200 people. Alongside Biden, a litany of other heads of state have confirmed their attendance, including Brazil’s Jair Bolsonaro, New Zealand Prime Minister Jacinda Ardern and South African President Cyril Ramaphosa.

They will be joined by more than 180 members of the public identified as key workers, including emergency service personnel and other professionals who were recognized in the queen’s birthday honors list in June.

At 11 a.m. (6 a.m. ET) the funeral will start, featuring readings by British Prime Minister Liz Truss among others, and prayers from Britain’s assorted archbishops, cardinals and other religious leaders.

Toward the end of the hour-long service, the Last Post bugle call will sound followed by two minutes of silence throughout the United Kingdom. The Reveille bugle call, the British national anthem and a lament played by the queen’s piper will end the ceremony at noon.

The coffin will then be taken to Hyde Park’s Wellington Arch, flanked again by the same members of the procession and punctuated by minute guns fired from the park. This time it will be joined by members of the Royal Canadian Mounted Police, the Royal Ulster Constabulary from Northern Ireland, and the publicly funded National Health Service.

An hour later the coffin will arrive at the arch, be placed in the State Hearse and taken to Windsor Castle for more minute guns, another service, and a private burial at St. George’s Chapel alongside the late Prince Philip, who has been held in the chapel’s royal vault since his death last year.