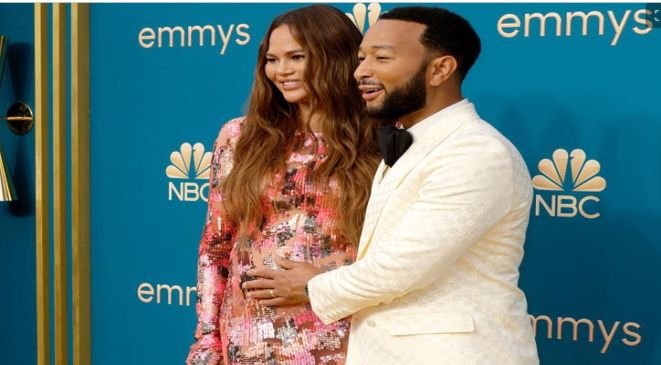 Chrissy Teigen has shown off her baby bump at this year’s Emmy Awards, with the cookbook author’s husband John Legend cradling her pregnant stomach on the red carpet.

The 36-year-old model arrived at the Microsoft Theater in Los Angeles, California, on Monday in a shimmering pink gown with multi-coloured sequins. She completed her look with a bright pink purse.

Teigen was accompanied by her husband, who wore a cream jacket and pants with a checkered pattern. He completed the look with a white shirt and black bow tie, along with a pair of black loafers.

While posing together on the red carpet, the “All of Me” singer held his hand cradled around his wife’s growing baby bump, while Teigen was also seen posing with her hand on her stomach.

On Twitter, Teigen also shared a photo of Legend at the awards show and sitting at a table. In the image, he was holding a small box that contained chocolate-covered pretzels, nuts, and chips.

She went on to joke about the box of food in the caption, as she wrote: “Oh I’m gonna need more than this lol.”

On the platform, multiple fans praised the couple and their looks at the 74th annual TV awards, while celebrating the pair’s growing family.

“Beautiful couple! So truly happy for you!” one fan wrote, along with a red heart and baby bottle emoji.

In August, Teigen announced that she was pregnant through IVF when she shared a selfie of her baby bump on Instagram.

“One billion shots later (in the leg lately, as you can see!) we have another on the way. Every appointment I’ve said to myself: ‘Ok if it’s healthy today I’ll announce’ but then I breathe a sigh of relief to hear a heartbeat and decide I’m just too nervous still,” she wrote in the caption.

“I don’t think I’ll ever walk out of an appointment with more excitement than nerves but so far, everything is perfect and beautiful and I’m feeling hopeful and amazing. Ok phew it’s been very hard keeping this in for so long!” she added.

Teigen and Legend currently share two children, Luna, six, and Miles, four. In September 2020, the couple shared that they had suffered a pregnancy loss.

We also compiled a list of the best-dressed stars on the red carpet and shared a look at what’s inside the Emmys gift bag.

Fans praised Elle Fanning after she revealed her Emmys dress was inspired by Old Hollywood and Hannah Waddingham was hailed as “iconic” after she unveiled sneakers under her gown.

Catch up with what happened at the Emmys here and find out about the biggest snubs and surprises here.