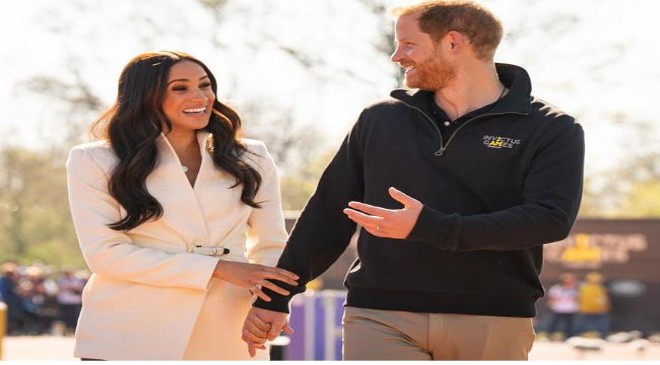 On Thursday, the website Prince Harry and his wife Meghan created as a platform for their new business ventures in California went dark. The links to Meghan’s new podcast disappeared and so did the references to the couple’s philanthropic efforts and their production deal. Instead, the homepage featured a tribute to Queen Elizabeth II.

To veil a website in digital mourning was a decision in line with royal protocols, but also with public sentiment, even in the seaside towns of southern California, where the Duke and Duchess of Sussex have lived since stepping back from their official roles in the Windsor family hierarchy.

At Ye Old King’s Head, an English pub and gift shop close to the beach in Santa Monica, the news of queen’s death on Thursday had made the shop a meeting place for both British expatriates and sentimental Americans, said Dusty Kerr, a 65-year-old from Leeds, who has worked at the shop for 23 years. “She’s well missed,” she said.

As people bought commemorative teapots and tea towels, and drank toasts to the queen’s memory in the pub, there were plenty of questions about what kind of a king Charles would be, Kerr said, but she didn’t hear much about California’s most famous British expats.

“Nobody’s done any negativity today,” she said. “Not been really hearing much about that – it’s all about Elizabeth.”

It’s unclear whether Elizabeth’s death, at age 96, will do much to change the path Harry and Meghan have begun to chart for themselves in California. In his first address to the nation, King Charles III gave their choice his stamp of approval, saying, “I want to also express my love for Harry and Meghan as they continue to build their lives overseas.”

The couple live in the celebrity enclave of Montecito, in a mansion reportedly purchased for $14.65m and have started Archewell, a combination of nonprofit and for-profit ventures that aims to “unleash the power of compassion to drive systemic cultural change”.

In a move that echoes the post-White House ambitions of Barack and Michelle Obama, the pair signed a reported $100m, multi-year deal with Netflix to produce TV shows, films and children’s programs. Meghan launched a Spotify podcast Archetypes, featuring interviews with American celebrity royalty such as Serena Williams, Mariah Carey and Mindy Kaling.

The duo is engaged in several humanitarian organizations, including Harry’s Invictus games, and frequently speak out on public issues. In November 2021, the New York Times announced the couple was “getting into finance” and trying to make “sustainable investing mainstream”; Meghan called Republican senators on their personal cell phones to advocate for paid family leave, and was criticized for introducing herself as the “Duchess of Sussex”, and Harry, who had served alongside actual academic experts on an Aspen Institute Commission on Information Disorder, said that he had emailed Twitter’s then-CEO Jack Dorsey on 5 January 2021 and “warned” him “that his platform was allowing a coup to be staged”. The couple’s Archewell website encourages readers to share their own personal stories and warns them to be “mindful of screen time” and not spend too much time online, a reference to their engagement with the Silicon Valley “Time Well Spent” movement led by the Center for Humane Technology.

Throughout it all, the Sussexes’ mission has been facilitated by A-list California friends such as Oprah, Tyler Perry and Serena Williams. The president of the NAACP, a major American civil rights group, sent them special condolences in the wake of Elizabeth’s death, calling them “dear friends and allies in our fight for a more just future”.

More scrutiny of Windsor family dynamics and the role these two royal dissenters might play in the reign of Harry’s 73-year-old father, Charles III, is likely, especially given the anticipated release of Harry’s memoir, which is expected to delve into the aftermath of Princess Diana’s death, and Harry and Meghan’s life in the UK before their departure to California.

If past days provide an indication, the reception of the Sussexes’ endeavors may vary widely in the UK and their new homeland, where Paris Hilton mourned the queen’s death with a tweet calling her “the original girl boss”, accompanied by a broken heart emoji.

In past weeks, The Cut published a magazine profile of Meghan coinciding with the launch of her podcast, taking readers inside the family’s lives in Montecito.

The interview, and Meghan’s chart-topping podcast interviews, sparked bitter criticism in the British press, and plenty of eye-rolling in the US, but did not stop Meghan from receiving “huge cheers” at a subsequent speaking event in England.

Jasmine Guillory, a New York Times bestselling author who has followed Meghan and Harry’s relationship, said that, despite the criticism it has generated, she enjoyed The Cut profile and is excited to see what Meghan does next.

Much of the recent criticism of Harry and Meghan is centered around the couple’s efforts to make money, “instead of having the money they inherited just come to them”, Guillory said. “Meghan has always worked. She’s always had a job.”

Katherine Fugate, the Los Angeles-based screenwriter of The Prince & Me, a 2004 romantic comedy starring Julia Stiles about an American woman who falls in love with a roguish European prince, said the media coverage after the queen’s death revealed an all-too-familiar double standard, in which Meghan was criticized for making the exact same decisions that Kate had made without commentary.

Like many people around the world, she continued to find the couple “very inspirational”, in part because Prince Harry had turned into the real-life equivalent of “the prince in my story – he chose to follow love, and sort of disregard the rules written a thousand years ago”.

“They’re choosing love, and they know what they’re getting into, and they chose it anyway,” Fugate said. “I see them as brave, and there’s always people that are afraid of bravery.”

Guillory, whose 2019 novel Royal Holiday was inspired by the couple’s story , said she cannot help but hope for some Windsor family reconciliation for Harry and Meghan, perhaps one that happens far out of the public eye.

“I am a person who likes to write happy endings,” she said. “I do hope that [Harry’s] relationship with his family gets better.