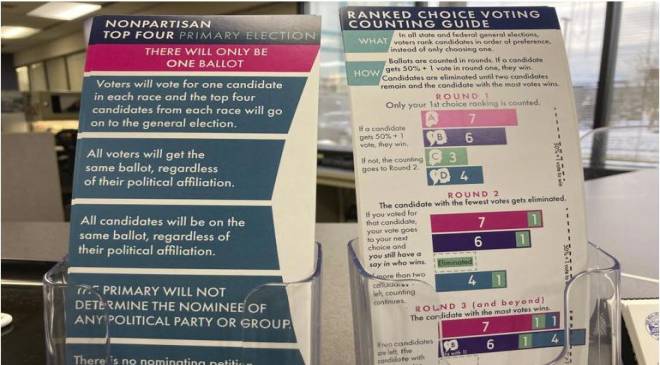 Sarah Palin looks set to be on the ballot in November’s general election after the former governor of Alaska and ex vice-presidential candidate clinched one of four spots vying for a seat in the US House, according to the Associated Press.

Palin, who rose to fame more than a decade ago as John McCain’s running mate, advanced to the general election along with her two challengers, Nick Begich III, a tech millionaire backed by the Alaska Republican party, and Mary Peltola, a former state legislator and Democrat. It was too early to call the fourth spot.

Palin, Peltola and Begich are competing for Alaska’s only House set, formerly occupied by Don Young, who died in March. The trio were also competing in a special election to serve the remainder of Young’s term, which ends early next year.

The results of the special election could take days to finalize as Alaska voters are using a ranked voting system for the first time.

Young was first elected to the office in 1973 and was the longest-serving Republican member of the House, holding the state’s sole seat in the chamber for nearly 50 years.

Palin, 58, first shot to prominence as John McCain’s running mate in the 2008 elections, when she branded herself a “mama grizzly” and built a persona as a loose-lipped loose cannon. Palin’s attacks on the media, her racist rabble-rousing and her eschewing of policy or traditional politics in favor of demagoguery in many ways paved the way for Trump, of whom she was an early endorser.

After that failed 2008 campaign, Palin left her post as Alaska governor and took a long hiatus from politics amid ethics scandals. This year, she staged a comeback, appearing with Trump at rallies and fundraisers but often skipping traditional campaign events and candidate debates within her home state.

Elsewhere in Alaska, Senator Lisa Murkowski faced 18 challengers – including the Trump-backed Senate candidate Kelly Tshibaka – in a non-partisan primary in which the four candidates garnering the most votes will advance to November’s general election.

The Congress and Senate races will offer insights into the power Trump still commands over voters, even in the “last frontier” of Alaska, where most voters have not declared a party affiliation.

As perhaps one of the most famous Alaskans, Palin remained the most familiar among the candidates, despite the perception among many voters that she abandoned her state after quitting the governorship. After leaving politics, she launched a career in reality TV, showcasing her life and state in shows such as Sarah’s Alaska and belting out Baby’s Got Back by Sir Mix-A-Lot while dressed in a pink and blue bear outfit on an episode of The Masked Singer.

“I knew who Sarah was before I became an Alaskan,” said Kari Jones, 47, who moved to the state five years ago after her husband, who is in the military, was posted there. But Jones said her husband backed Begich, in large part because the former governor didn’t show up to a local meet-and-greet event and had been less accessible than her opponents. “She did lose some votes because of that,” Jones said.

“I’m looking for candidates that show they’re really dedicated to the state, not just during election time,” Aundra Jackson, 60, who was fishing for coho salmon in Anchorage.

Nearly 15 years ago, when Palin first took the governor’s seat, she was a fiery newcomer who unseated a powerful incumbent: Lisa Murkowski’s father, Frank Murkowski. Back then, Palin’s approval rating had peaked just over 90% according to Ivan Moore, an Anchorage-based pollster. She was briefly reputed for her bipartisanship, creating a sub-cabinet on climate change and taking on the oil and gas industry, before she leaned into more rightwing politics.

“Palin is probably the most attractive, charismatic candidate out there,” Jackson said. “But when she’s asked any specific questions, all I hear from her are soundbites. So it just surprises me that she’s got the popularity.”

Begich, who painted Palin as absentee and vacuous in the days before the election, had earned endorsements from many prominent state Republicans.

Peltola, the Democratic candidate, has presented herself as a fiercely amicable moderate who was willing to collaborate with conservatives and progressives. “I’m not interested in speaking ill of Sarah, she has her supporters and I respect her and her supporters,” she said in an interview with the Guardian before the election.

The congressional election on Tuesday was the state’s first ever ranked-choice race, where voters were able to choose their first, second and third choice for the role. In “pick one” Senate and congressional primaries, voters also choose their favorite candidate from a longer list of choices. The four with the most votes in each race will advance to the ballot in November.