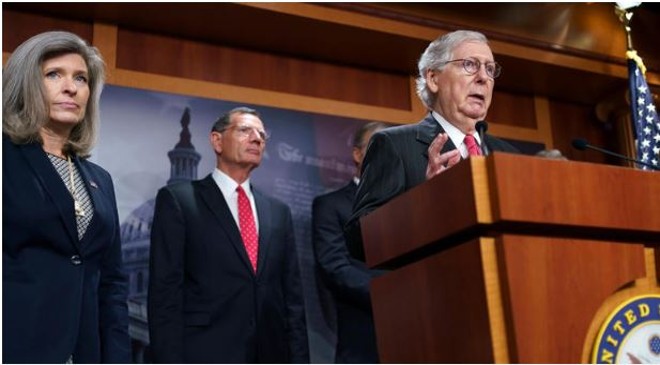 Senate Minority Leader Mitch McConnell (R-Ky.) clinched a victory on Wednesday when the Senate — including 48 of the chamber’s 50 Republicans — voted overwhelmingly to admit Finland and Sweden to NATO.

Senate Minority Leader Mitch McConnell (R-Ky.) clinched a victory on Wednesday when the Senate — including 48 of the chamber’s 50 Republicans — voted overwhelmingly to admit Finland and Sweden to NATO.

Trump throughout his presidency was a critic of NATO. It was a part of the “America First” agenda that reverberated with parts of the GOP base after the Iraq and Afghanistan wars but also divided Republican officeholders.

McConnell visited war-torn Ukraine with a congressional delegation in May and made stops in Finland and Sweden during that trip. During the debate over bringing those countries into NATO, he argued that doing so made the U.S. stronger, not weaker.

The GOP leader definitely won the battle, even if he lost Sen. Josh Hawley (R-Mo.), the only member of either party in the Senate to vote “no.”

Most strikingly, Sens. Mike Lee (R-Utah) and Rand Paul (R-Ky.) both shifted in their votes. The two were the only senators to vote against resolutions in 2017 and 2019 adding Montenegro and North Macedonia, respectively, to NATO.

On Finland and Sweden, the two libertarian-leaning lawmakers took a different stance: Lee voted for the resolution, and Paul voted present.

“There’s a real and dangerous world out there, and it’s very easy to talk about U.S. isolationism or U.S. restraint or U.S. disengagement from the world, and then it’s quite another matter voting in favor of that. And I think that’s, you know, what we saw with Sen. Paul and Sen. Lee not voting against Sweden and Finland joining NATO,” Luke Coffey, senior fellow at the Hudson Institute, a conservative think tank, told The Hill.

Hawley argued on the Senate floor and in an op-ed that the U.S. should not focus on expanding security commitments in Europe, because the “greatest foreign adversary” facing America is China. He had backed adding North Macedonia to NATO in 2019.

Trump repeatedly criticizes McConnell, who blasted the former president for his actions leading up to the Jan. 6, 2021, attack on the Capitol in a floor speech shortly after the president’s impeachment trial. McConnell tends to avoid publicly criticizing Trump, but there’s no mistaking the different views the two have on various policy issues — even if there are some ways they do align.

NATO and foreign policy has generally been one of the areas of divide.

Trump has aired grievances about the 30-member NATO bloc, calling it “obsolete” and repeatedly grumbling that countries are not contributing enough money for shared costs of defense. At one point during his presidency, he reportedly advocated for pulling the U.S. from NATO.

Ahead of the vote on Wednesday, McConnell openly admitted that he was worried about the isolationist wing of the party that has been fueled by Trump.

“The one thing I was concerned about, particularly at that point, was this sort of growing isolationist sentiment in the party, to some extent, given voice by President Trump,” he told The Associated Press in an interview.

In remarks on the Senate floor that day, the Republican leader did not hold back in addressing potential opposition to the resolution.

“If any senator is looking for a defensible excuse to vote ‘no,’ I wish them good luck,” McConnell said. “This is a slam dunk for national security that deserves unanimous bipartisan support.”

Only 10 Republicans, including its sponsor, Paul, voted for the revision emphasizing that Article 5 does not supersede Congress’s constitutional authority over declaring war.

Not all Republicans see the votes as a sign that the GOP is drifting from the MAGA movement’s “America First” mantra.

Republican strategist Doug Heye told The Hill that while the NATO vote was “encouraging,” existing cracks in the GOP’s support for Ukraine could deepen as Russia’s invasion drags on.

“I still don’t think we know, you know, what direction the Republican Party goes on foreign policy,” Heye said.

“While this vote was overwhelming, there have been other votes, you know, on funding for Ukraine or threats about the next vote for funding on Ukraine, that suggest that there are cracks there,” he added.

The Senate in May passed a $40 billion aid package for Ukraine in an 86-11 vote, with all opposition coming from the Republican Party. Hawley, Paul and Lee were all among those who voted “no.” On the House side, 57 Republicans opposed the supplemental.

Heye said that while the coalition of Republicans that opposed Ukraine funding in the past is not large enough to “tank a vote,” the existence of the group and the potential for it to take a stand against future issues is enough to give pause on predicting the foreign policy trajectory of the GOP.

He’s far from the only Republican with that view.

He argued that Trump’s “America First” philosophy has been conflated with the anti-interventionist movement, asserting that the Trump credo is based in the belief that U.S. foreign policy should be rooted in interests at home.

“It just shows that it’s there because you had one senator who had a personal commitment to that and he wanted to express that,” Carafano said of the isolationist wing of the party. “That’s part of the patchwork of the Republican movement. It always will be.”

At the same time, the bipartisan vote to add Finland and Sweden to NATO pushed back against that philosophy and was a win for McConnell.

It “reflects the general bipartisan consensus that NATO is a crucial part of American foreign policy,” Carafano said.