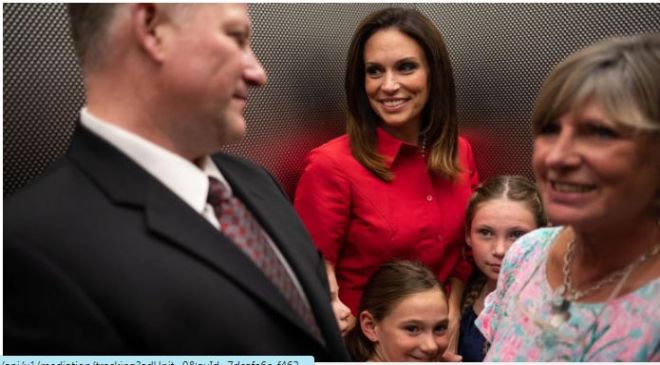 PHOENIX — Primary victories in Arizona and Michigan for allies of Donald J. Trump on Tuesday reaffirmed his continued influence over the Republican Party, as the former president has sought to cleanse the party of his critics, install loyalists in key swing-state offices and scare off potential 2024 rivals with a show of brute political force.

In Arizona, Mr. Trump’s choice for Senate, Blake Masters, won a crowded primary as did his pick for secretary of state, Mark Finchem, an election denier who has publicly acknowledged his affiliation with the far-right Oath Keepers militia group. The governor’s race was virtually tied early Wednesday, even as Mr. Trump’s pick, Kari Lake, was badly outspent.

And in a particularly symbolic victory for Mr. Trump, Rusty Bowers, the Republican speaker of the Arizona House who gained national attention after testifying against Mr. Trump at the Jan. 6 congressional hearings, lost his bid for State Senate.

In Michigan, a House Republican who voted to impeach Mr. Trump, Representative Peter Meijer, was defeated by a former Trump administration official, John Gibbs, and Mr. Trump’s last-minute choice for governor, the conservative commentator Tudor Dixon, who has echoed his false claims of election fraud, easily won her primary.

Mr. Trump and his allies have been particularly focused on the vote-counting and certification process in both Arizona and Michigan, seeking to oust those who stood in the way of their attempts to overturn the 2020 election. The victory of Mr. Finchem, who marched on the Capitol on Jan. 6, was a key sign of how the “Stop the Steal” movement that was formed on a falsehood about 2020 has morphed into a widespread campaign to try to take control of the levers of democracy ahead of the coming elections.© Christopher (KS) Smith for The New York TimesSupporters of Kansas’ abortion referendum praying while waiting on election results in Overland Park, Kan., Tuesday night.

Tuesday’s primaries in five states — Arizona, Michigan, Missouri, Kansas and Washington State — kicked off a final six-week stretch of races that will provide the fullest picture of the Republican Party’s priorities in 2022, how tight Mr. Trump’s hold remains on the base and the extent to which his falsehoods about a stolen election in 2020 have infected the electorate.

In Washington State, Mr. Trump had backed challengers to two Republican House members who voted for his impeachment. But both of those incumbents appeared to be in strong positions to advance over Mr. Trump’s preferred candidates — benefiting from the state’s top-two primary system, though neither race had been called early Wednesday.

Many Republican strategists are eager to move beyond the primaries and this period of infighting to focus fully on defeating the Democrats this fall and to take advantage of President Biden’s slipping support and growing voter frustrations about inflation and the state of the economy.

In a relief for national party strategists, Missouri Republicans rejected the political comeback attempt of Eric Greitens, the scandal-plagued former governor who ran for Senate. Party leaders had worried that Mr. Greitens would have jeopardized an otherwise safe Senate seat for Republicans. Mr. Trump had stayed out of that race until a bizarre last-minute dual endorsement on Monday of “Eric” — with no last name — a blessing that covered both Mr. Greitens, who finished in a distant third place, and Eric Schmitt, the state attorney general, who won the Senate nomination.

In Kansas, voters offered a warning sign to bullish Republicans, as a ballot measure on abortion showed the electoral potency and shifting politics of the issue in the wake of the Supreme Court’s ruling overturning Roe v. Wade. Voters there strongly rejected the effort to amend the State Constitution to remove the protected right to abortion.

Several of the marquee Republican contests on Tuesday were in Arizona, a top presidential battleground with an open governor’s race, a contested Senate seat and multiple competitive House races in 2022.

In the contest for governor, Mr. Trump endorsed Ms. Lake, a telegenic former newscaster who had become an unabashed champion of Trumpism. Mr. Trump is seeking some redemption after struggling earlier this year in other governor’s races, most notably failing in his attempt to oust the Republican governor of Georgia, Brian Kemp.

Unlike Mr. Kemp, the Republican governor of Arizona, Doug Ducey, who earned Mr. Trump’s ire by supporting the results of the 2020 election, was term-limited and not on the ballot himself. Mr. Ducey put his support behind Karrin Taylor Robson, a wealthy real estate developer who spent more than $18 million on her run and who also had the backing of Mike Pence, Mr. Trump’s former vice president.

Ms. Lake, who has made voter fraud a centerpiece of her candidacy, declared victory at a moment when she was actually behind in the vote counting. “We won this race,” Ms. Lake said at her election-night party. “Period.” She later took the lead for the first time, but that contest remained too close to call.

In the Senate race, Mr. Masters, a 35-year-old political newcomer, won the Republican nomination to face Senator Mark Kelly, a Democrat, who is seeking a full six-year term after ousting a Republican in 2020. The race is expected to be among the most contested of the fall midterms.

The primary victory represents the second major win for Peter Thiel, a venture capitalist and major Republican donor who co-wrote a book with Mr. Masters. Mr. Thiel put $15 million of his own money into a super PAC backing Mr. Masters and another $15 million into a separate super PAC supporting J.D. Vance, who won his Senate primary in Ohio this spring.

Mr. Masters defeated Jim Lamon, a businessman who pumped $14 million of his personal fortune into his campaign, and Mark Brnovich, the Arizona attorney general who Mr. Trump had attacked repeatedly for not investigating his baseless theories of voter fraud.

Holly Law, a 53-year-old who lives in Phoenix, said the determining factor in her votes for Ms. Lake and Mr. Masters was the former president’s blessing.

“The Trump endorsement — that’s it,” she said on Monday at a pre-election rally. Ms. Law insisted, despite the lack of evidence of fraud, that the 2020 election was stolen from Mr. Trump and said she had stopped watching Fox News entirely because it was the network that first called her state for Mr. Biden.

“Newsmax — 100 percent,” she said of her current viewing habits, referring to the conservative news network.

In Michigan, Mr. Trump had delivered a late endorsement to Ms. Dixon, who easily won the Republican nomination for governor after two top rivals were tossed from the ballot for turning in fraudulent petitions. Among those on the ballot and among those defeated on Tuesday was Ryan Kelley, who led in an early poll after he was arrested in June by the F.B.I. and charged with trespassing and other crimes connected to the storming of the Capitol on Jan. 6. Mr. Kelley was in fourth place early Wednesday.

The Democratic primaries on Tuesday for statewide offices were less drama-filled. In Arizona, Secretary of State Katie Hobbs won the Democratic nomination for governor, and in Michigan, Gov. Gretchen Whitmer formally became her party’s nominee for a second term.

Michigan did have some intense Democratic House primaries, including an expensive one in the Detroit suburbs where Representatives Andy Levin and Haley Stevens were drawn into the same district. Ms. Stevens won with the heavy financial support of the new super PAC arm of the American Israel Public Affairs Committee, among others.

But the highest profile House race in Michigan was Mr. Meijer’s re-election bid. His primary rival received a surprise late boost from the political arm of House Democrats, which spent hundreds of thousands of dollars on television ads because Mr. Gibbs was seen as easier to defeat this fall in a swing seat.

“I’m proud to have remained true to my principles, even when doing so came at a significant political cost,” Mr. Meijer said in a statement conceding defeat.

The meddling by the Democratic Congressional Campaign Committee for a pro-Trump candidate has earned backlash from fellow Democrats, who saw such involvement as undermining the party’s overall message that election deniers are a threat to democracy.

“I’m disgusted that hard-earned money intended to support Democrats is being used to boost Trump-endorsed candidates,” Representative Dean Phillips of Minnesota said last month, calling Mr. Meijer “one of the most honorable Republicans in Congress.”

For the other two Trump impeachers, Washington State’s top-two primary system was poised to help them survive, drawing a larger crowd of candidates and splitting the vote among their Republican rivals.

Representative Jaime Herrera Beutler was ahead of her Trump-backed challenger Joe Kent, a retired Green Beret, with more than half the vote counted. Mr. Kent, whose wife was killed by a suicide bomber in 2019 in Syria, first met Mr. Trump at Dover Air Force Base when he went to view his late wife’s remains.

Representative Dan Newhouse, another Republican who voted to impeach Mr. Trump, counted among his challengers Loren Culp, a Trump-supported candidate who ran for governor in 2020 and refused to concede that race despite losing by a wide margin. Mr. Culp was not among the top two candidates with roughly half the votes counted.