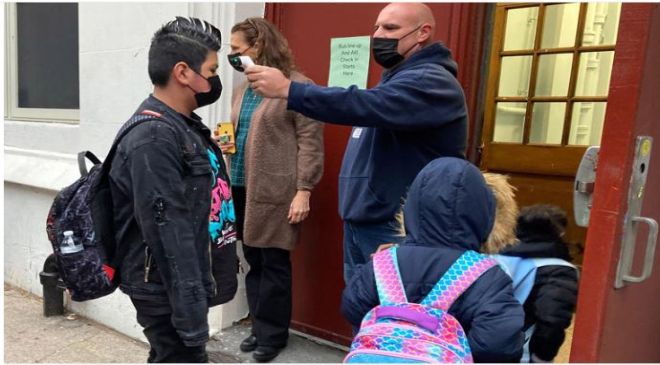 School districts and education officials nationwide have been figuring out how to best spend the latest round of federal Covid relief funds, an unprecedented influx of aid for K-12 education meant to help schools rebound and stay open during the pandemic.

With the Biden administration announcing it had recently distributed all $122 billion of the funds under the relief plan, some themes have begun to emerge about how the money will be spent across the nation.

An NBC News analysis of the spending plans of four of the five largest school districts, and interviews with education experts, found that priorities for the federal aid included increasing instructional time through tutoring; summer school and after-school and enrichment programs. Literacy support, and hiring and increasing pay for staff, including teachers and mental health counselors, has also been given precedence, along with improving ventilation systems.

“We’re beginning to get an understanding of what local spending priorities are. There’s some reason for optimism in what we’re seeing,” said Thomas Toch, director of FutureEd, a think tank at Georgetown University’s McCourt School of Public Policy. “But it’s going to take a couple of years to know what our return on this investment is going to be.”

FutureEd analyzed a database of the spending plans for about 2,500 school districts compiled by data services firm Burbio to assess how they would spend the federal Covid relief.

FutureEd’s analysis found that summer learning was a top priority in the Northeast and South, while School districts in the West gave upgrades to ventilation, heating and air-conditioning systems priority. Hiring and increasing pay for teachers was of great importance in the Midwest.

The think tank found that more than half of the districts and charter schools in the data sample planned to use the funds to hire or reward teachers, guidance counselors and academic specialists. About half planned to spend the aid on summer programs.

More than half also planned to use the federal aid to improve school climate systems, with heating, ventilation and air conditioning a top-three priority in every region, according to FutureEd.

School districts have until late 2024 to spend the money.

“In areas where these funds are being deployed quickly, we are already seeing the positive impact that this infusion of federal support is having directly in schools and communities,” Secretary of Education Miguel Cardona said in a statement last month. “We know what it takes to keep our schools open safely for in-person learning, and these funds will help us achieve that goal.”

Florida’s Miami-Dade County Public Schools, the fourth largest school district in the country, plans to spend as much as $30 million for hourly K-12 tutors and interventionists through the next school year, and another $20 million for after-school enrichment programs, according to plans on the district’s website detailing its draft budget initiatives.

The school district also plans to spend $100.5 million for mobile devices for students, and $120.5 million for extended summer school in 2021 and 2022, using the latest and previous round of federal funds.

Ron Steiger, the district’s chief financial officer, said the key questions the school district asked itself to determine how to best spend the funds were: “How do we make sure that the impact of the pandemic doesn’t sit with us academically as a school district in perpetuity? How do you make that investment in a way that’s non-recurring so when the dollars run out, the expenses decline as well?

“That’s the needle we have been threading for the last few months and we’ll continue to do it for the next few years,” he said.

In Los Angeles, the spending plan reflects concerns over how to address learning loss and lost instructional time as the pandemic grinds on and upends learning in unpredictable ways.

A spokesperson for the Los Angeles Unified School District, the second largest in the nation, provided data showing it plans to spend $1.7 billion on strategies to address lost instructional time, including technological devices and internet access for students. Another $407 million has been set aside for resources that enhance continual and safe in-person learning, such as custodial staffing, Covid testing and personal protective equipment.

Chicago Public Schools, the third largest school district, said in a statement that the use of Covid relief funds was “aligned with key priorities like emerging stronger post-pandemic with a focus on a safe return to in-person instruction; maintaining continuity of service, including sustaining staffing and adding additional resources in schools; and a focus on resource equity addressing the disproportionate impact of Covid-19 on communities of color and communities experiencing poverty.”

The district provided a presentation showing how it planned to use $578 million in fiscal years 2023 and 2024 for special education staffing, universal pre-K expansion, and district equity grants. Another $438 million, for fiscal years 2022 and 2023, would go toward “districtwide initiatives to address unfinished learning,” and toward high-dosage tutoring, mentorship, mental health support, and professional learning opportunities.

“CPS’ spending plan is based upon feedback from school leaders, teachers, students, parents and community stakeholders shared during the Budget Equity Forums held in February 2021,” the statement said.

Jenna Lyle, the associate press secretary for the New York City Department of Education, the largest school district in the country, said in a statement, “Every dollar we’ve received in stimulus funds is going towards supporting our students and continuing the incredible work happening in our schools as part of our city’s recovery.”

Just how the school districts spend the money is expected to be closely watched.

Toch said these plans “may evolve over the next two or three years, and so we want to be watching to see what they actually spend their money on.”

“Ultimately, what matters most is how well they spend their money,” he said. “It’s great to be committed to a substantial tutoring infrastructure, but if they do it badly then the return on that investment will be much lower than it might otherwise be.”

According to the pandemic relief act, at least 20 percent of the funds must be used “to address learning loss through the implementation of evidence-based interventions, such as summer learning or summer enrichment, extended day, comprehensive after-school programs, or extended school-year programs, and ensure that such interventions respond to students’ academic, social and emotional needs and address the disproportionate impact of the coronavirus on the student subgroups described.”

But there is also a lot of discretion in the way the more than 13,000 school districts around the country can spend the money, said Bree Dusseault, a principal at the Center on Reinventing Public Education. The research organization compiles a database of pandemic planning from 100 large and urban districts.

“It’s an unprecedented amount of funds and it’s really flexible,” Dusseault said. “What that means is that there’s going to be a lot of variation in difference in how districts think about and strategically deploy those funds. It also means that transparency and clarity on how they’re spending the funds and why they’re spending them that way is so important.”

A report by The Associated Press found that at least a handful of districts were devoting a lot of the money to athletic projects, which proponents say support students’ physical and mental health. Critics, however, say such plans run counter to the intention of the federal aid and could be used on learning loss instead.

Dusseault said whether the spending plans for the funds are transparent and clear to communities depends on the district.

“In some cases, we have districts that are very clear about how they’ve surveyed or spoken with stakeholders, and some districts actually explain how that feedback is shaping the decisions they’re making,” she said. “Other districts, there’s just nothing available publicly to know how you could give input to that process.”

She said the plans for the funding were coming out “just as more and more data is surfacing about just how much students have been impacted by the last two years.” She added there was increasingly more data showing that students are not just behind from the first year of the pandemic, but the disruptions from the delta and omicron variants “have led to two years in a row of highly disruptive learning for students and for the staff who care for them.”

“That is putting more pressure and attention on districts to make sure they focus these funds on caring for their students and getting their students back to a place of recovery,” she said.

“In a way, just returning to the old status quo may be a worst-case option for districts because we know that prior to the pandemic there were already a lot of inequitable gaps. The pandemic really just exacerbated those gaps,” Dusseault said. “There’s a hope that these funds are also going to go to districts piloting new strategies that will get them to a new normal rather than the old normal from before the pandemi