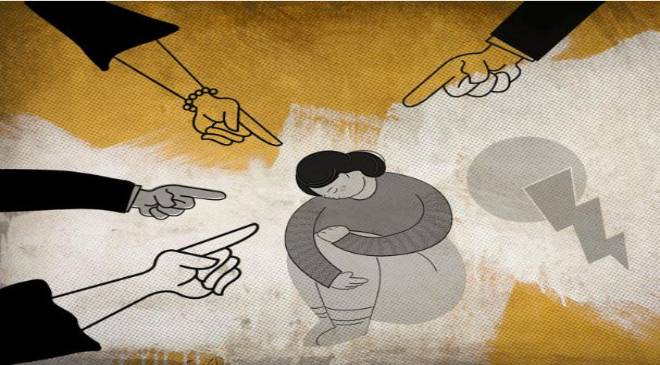 Tigress Osborn is fat, and she’s OK with that.

What she’s not OK with is how she and others with excess weight are treated as if they’re lazy, stupid and sick.

She insists on using the word “fat” rather than the more politically correct “person with obesity,” which she believes characterizes people with extra pounds as abnormal or unhealthy.

Many of the problems people blame on obesity might instead be the fault of something else, she said.

Take COVID-19. Research found obesity played a role in 30% of severe cases of the disease. But, Osborn suggested, what if the story is really that fat people waited too long to seek medical care because they’re so used to being poorly treated by the health care system? Or maybe fat people who exercise or follow a certain diet have a different risk profile, but the message is just “all fat people are at risk.”

“It’s impossible for us to know whether some of the things that are blamed on fat are caused by weight stigma or other forms of oppression,” she said, citing anti-poverty bias and racism.

Every facet of society – including the medical community – has failed fat people, Osborn and others said.

Researchers have focused on what’s wrong with being fat, rarely exploring why some people remain healthy regardless of excess weight. Doctors have told those with extra pounds they need to lose weight but haven’t offered them a realistic method for doing so.

In 2005, U.S. Surgeon General Richard Carmona declared obesity a bigger threat to America than terrorists, but government has done little to rein in food marketing, reduce demand by increasing taxes or adding the kind of nutrition labels shown to decrease “junk food” consumption in other countries.

The law offers little protection. It remains legal in 49 states to fire people simply for their size.

And stigma against excess weight remains in every corner of life even as 42% of Americans fit the medical definition for having obesity. (Obesity is defined as a body mass index – a measure of height and weight – of 30 or above. A 5-foot-5 woman would be considered to have obesity if she weighed more than 180 pounds.)

“We know that shaming people to lose weight doesn’t work,” said Osborn, 47, a full-time advocate for fat people’s rights. It hasn’t for the 40 years of the declared obesity epidemic or decades of research before that. Yet weight bias continues.

The medical community leaves little doubt that carrying extra pounds can lead to serious health problems. Many types of cancer are linked to obesity. So is heart, liver and kidney disease. People with obesity run an 80% higher risk of developing diabetes than those without it.

In 2013, the American Medical Association defined obesity as a disease itself. They wanted to finally bring attention to the idea that people are not to blame for their excess pounds, that fat people are not lazy or dumb, just suffering from an illness.

But Osborn is tired of being defined as sick when she’s not.

Researchers could learn a lot, she said, by looking at people with excess weight who don’t develop diabetes.

“When fat people don’t have the problems we think are caused by fat, we dismiss them as an anomaly,” she said. ”There is no money to be made in telling people they’re fine the way they are.”

The assumption of poor health can have serious consequences.

Before having surgery last summer, Osborn needed a cardiologist’s clearance. After asking what she had done to lose weight, the cardiologist glanced at her EKG and said it suggested she’d had a heart attack.

Osborn freaked out. Her surgery nearly canceled, she was scheduled for further testing and prescribed a drug that made her feel sick for weeks.

The operation went fine, and when seeing a different cardiologist afterward, she asked about the supposed heart attack. “Oh no,” he told her. “Those kinds of readings happen all the time when an electrode isn’t placed properly.” He took her off the medication.

“It was very clear to me that that all would have gone very differently if I had walked into that office not looking like I look,” Osborn said.

“Not everything going on in (a fat person’s) body is because of their fat. And what the doctor assumed was going on in my fat body wasn’t even going on.”

Many of the studies that tie health problems to excess weight don’t adequately consider other possible causes of those problems, said Ragen Chastain, an advocate, researcher, speaker and author of  ”The Weight And Healthcare Newsletter.”

For instance, yo-yo dieting, practiced by people desperate to lose pounds but destined to regain them, has been shown to cause some of the health problems otherwise attributed to excess weight.

“Well-intentioned people have been duped,” Chastain said, by the assumption that all weight gain is bad and weight loss good.

When people don’t lose weight with lifestyle changes, the assumption is it’s because they’re not trying hard enough, which is then used to stigmatize them even further, Chastain said.

Research shows people can be heavy without being sick.

“There’s a subgroup of people with obesity but without indicators of poor health where I wonder what the rationale would be for treating them,” said Kevin Hall, an obesity researcher at the National Institutes of Health.

He noted they might run a higher risk for health complications in the long run. But people with very little body fat face many of the same health risks. “Body fat has a reason,” Hall said.

More than a number on a scale

Glenn Gaesser has been arguing for more than a quarter century that fitness does a far better job of predicting health than weight.

Technically, fitness is measured by oxygen use while on a treadmill, so it’s too complicated to be widely adopted, said Gaesser, a professor of exercise physiology in the College of Health Solutions at Arizona State University.

But most people can reach at least minimal fitness by moderately exercising 150 minutes a week, or briskly exercising for 75 minutes a week. “The biggest benefit comes from getting people from a ‘couch potato’ status to some level of activity,” he said. “It’s not like getting ready to run a marathon.”

Exercising improves the health of virtually every major cell type in the body, he said, including fat cells. There’s clearly something biological about fitness. In mice, transplanting fat tissue from fit animals into sedentary ones improved the recipient’s metabolic health.

Size does not determine risk for people with good cardiovascular fitness, Gaesser and a colleague concluded in a 2021 article. Most heart disease risks associated with obesity can be improved with exercise, independent of weight loss. And it’s yo-yo dieting, not simply excess weight that poses serious heart health risks, they concluded.

“If we just try to focus on the behaviors and encourage those people to engage in more physical activity, their health would improve,” Gaesser said.

With COVID-19, the apparent higher risk of infection and disease severity might have been more about the patients’ fitness levels than their weight, Gaesser said, citing a 2020 study that concluded as much. “It wasn’t the fatness that was the predictor, it was the unfitness,” he said.

Although having obesity can make exercise more challenging at first, Gaesser said, his research and experience suggest people of any size, even with a very high weight-to-height ratio, “can improve their fitness level just as much as anyone else.”

With so many Americans carrying extra pounds, it seems logical that society would be getting more accepting of heavier people.

But it isn’t, according to Rebecca Puhl, who has studied the subject for decades.

The public perception is that shaming people for their size will provoke them to lose weight. “We see the opposite,” said Puhl, deputy director of the Rudd Center for Food Policy & Health at the University of Connecticut.

Some advertisers have evolved, offering plus-sized models, which Puhl supports. But “we still have very stringent societal ideals of thinness,” she said, and people who violate those ideals are considered lazy and lacking in willpower.

Shame and stigma cause psychological and emotional distress, anxiety and low self-esteem, all of which can lead to disordered eating and extra pounds, she said. People of all races face weight stigma, though racism compounds the ill effects of weight prejudice.

“Weight stigma itself is a public health issue,” Puhl said. “We need to shift societal attitudes that are strongly ingrained and have been for decades.”

In survey data across nations, more than half of those with obesity point to family members and doctors as the biggest sources of “fat shaming.”

Historically, weight stigma wasn’t “on the radar” for doctors or medical students, she said. But in 2020, more than 100 medical organizations committed to ending it. “There’s a recognition that we need to address this.”

Now, some of the stigma is coming from the other side as well, with people getting blasted on social media and elsewhere for going public with their attempts to lose weight.

Ted Kyle takes issue with both the people who contend obesity is a crisis and with those who say it poses no problem at all.

Research has clearly established that obesity can undermine health. But that doesn’t justify policing other people’s weight, said Kyle, founder of ConscienHealth, which promotes sound approaches to health and weight.

Obesity is a long-term health problem; stigma and bias do their damage in the short term, he said.

“When you tell someone their health, their body is a disaster, it’s not helpful. It does cause immediate harm,” said Kyle, also a former chair of the Obesity Action Coalition, a 75,000-member nonprofit advocacy organization.

“The media and public health needs to stop catastrophizing obesity.”

There’s no question excess weight increases the risk for disease, but Kyle doesn’t see it as a crisis that can be resolved quickly. The language of emergency reinforces bias against large people, he said.

Science hasn’t yet figured out how to solve obesity, at least not at the population level.

“All the while when we’ve been pursuing food and physical-activity-based solutions, the rate of obesity keeps rising,” he said. “We don’t know how to blunt the rise in obesity because we don’t know precisely what the factors are (that are causing it).”

The type of food people eat may play a role, along with stress, additives and a host of other factors.

At the individual level, Kyle said, obesity medicine specialists have made a lot of progress in helping people lose weight, but many of those approaches aren’t covered by insurance – at least not without the kind of lobbying that is difficult for all but the most advantaged patients to muster.

Osborn said she understands why people opt for weight loss medications or surgery if their doctor regularly tells them they’ll die without it. But counseling patients on how to be healthy at any size would be safer and less stigmatizing, she said.

“People living in a fat-phobic culture are going to resort to things that will help them move away from that oppression,” Osborn said. “They’re making a tough choice in a culture that’s telling them their body is hate-able.”