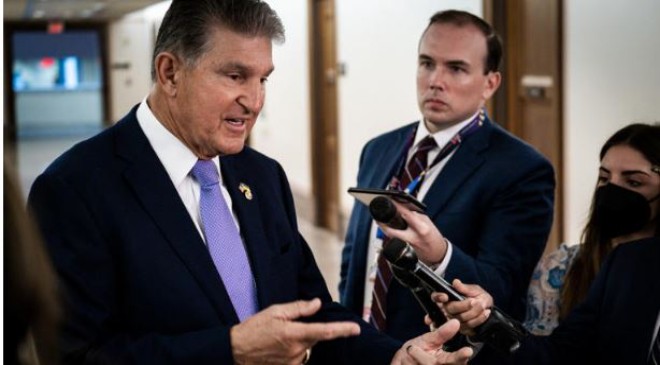 WASHINGTON — Senator Joe Manchin III of West Virginia, a key centrist Democrat, announced on Wednesday that he had agreed to include hundreds of billions of dollars for climate and energy programs and tax increases in a package to subsidize health care and lower the cost of prescription drugs, less than two weeks after abruptly upending hopes for such an agreement this summer.

The package would set aside $369 billion for climate and energy proposals, the most ambitious climate action ever taken by Congress, and raise an estimated $451 billion in new tax revenue over a decade, while cutting federal spending on prescription drugs by $288 billion, according to a summary circulated Wednesday evening.

The product of a deal announced by Mr. Manchin and Senator Chuck Schumer, Democrat of New York and the majority leader, it would reduce the federal deficit by about $300 billion, while seeking to push down the cost of health care, prescription medicines and electricity.\

The plan falls far short of the ambitious domestic policy and tax package President Biden proposed last year, but Democrats, looking toward midterm elections that are likely to be shaped by voters’ concerns about soaring costs, pitched it as a targeted attack on the rapid price increases that have socked American consumers in the wallet this year, with inflation running at a 40-year high.

The announcement suggested that Democrats could move in the coming days to salvage a major piece of their domestic agenda, which only weeks ago appeared doomed given Mr. Manchin’s refusal to quickly sign on. Top Democrats released legislation on Wednesday evening, aiming for votes as early as next week.

“This is the action the American people have been waiting for,” Mr. Biden said in a statement, calling on both chambers to quickly pass the measure. “This addresses the problems of today — high health care costs and overall inflation — as well as investments in our energy security for the future.”

It was not clear what had changed Mr. Manchin’s mind since he said not even two weeks ago that he could not support such a package until he saw inflation numbers for July, which are not scheduled to be issued for two more weeks. But quiet negotiations had resumed between Mr. Manchin, Mr. Schumer and their staffs in recent days, according to a person familiar with the talks.

The abrupt announcement came only hours after passage of a huge industrial policy bill aimed at bolstering American competitiveness with China that Senator Mitch McConnell, Republican of Kentucky and the minority leader, had said he would never support as long as Democrats continued their efforts to push through their marquee domestic policy bill over G.O.P. opposition. But that legislation still needs to clear the House, and Republican leaders in that chamber said they would instruct their ranks to oppose it after news of the deal.

With the Senate divided 50 to 50 and Republicans uniformly opposed, Democrats need unanimous support within their party and the tiebreaking vote of Vice President Kamala Harris to pass the plan under special rules that shield certain budget bills from a filibuster. Mr. Manchin’s resistance has been the primary obstacle to doing so all along, handing him effective veto power over its contents — and the final say over whether any measure could pass the Senate.

His embrace of the plan did not guarantee it would move forward. Several senators declined to comment on the deal upon hearing of it on Wednesday evening until they learned more about it. That included Senator Kyrsten Sinema, an Arizona Democrat who has been another holdout on her party’s domestic policy measure. (A spokeswoman said the senator needed to review the legislation.)

But by the evening, several key liberal Democrats were rallying behind the plan.

“By a wide margin, this legislation will be the greatest pro-climate legislation that has ever been passed by Congress,” Mr. Schumer declared in a separate statement, thanking Mr. Manchin for “his willingness to engage and his commitment to reaching an agreement.”

The tax increases included in the agreement would fall largely on multinational corporations and private equity firms, and would be accompanied by a crackdown on high-earning individuals and businesses that seek to avoid paying the taxes they owe.

One possible clue to Mr. Manchin’s change of heart came in a line of his joint announcement with Mr. Schumer that they had secured a commitment from both Mr. Biden and Speaker Nancy Pelosi of California that Congress would approve a separate measure to address the permitting of energy infrastructure, potentially including natural gas pipelines, before the end of the fiscal year on Sept. 30.

That could ease the way for a project in which Mr. Manchin has taken a personal interest, the Mountain Valley Pipeline, which would transport Appalachian shale gas from West Virginia to Virginia.

Democrats said the Senate could take up the legislation by next week, although a number of parliamentary and procedural hurdles remain. It must adhere to strict budgetary rules since Democrats plan to move it under the arcane budget process known as reconciliation that allows certain fiscal measure to pass with only a simple majority.

The legislation “will make a historic down payment on deficit reduction to fight inflation, invest in domestic energy production and manufacturing, and reduce carbon emissions by roughly 40 percent by 2030,” Mr. Manchin and Mr. Schumer said in their joint statement. The two senators added that “we urge every member of the U.S. Senate to support this important legislation.”

Republicans balked at the announcement, reiterating their opposition to the Democrats’ plan.

“Democrats have already crushed American families with historic inflation,” Mr. McConnell said on Twitter. “Now they want to pile on giant tax hikes that will hammer workers and kill many thousands of American jobs. First they killed your family’s budget. Now they want to kill your job too.”

Senator Lindsey Graham, Republican of South Carolina, expressed disbelief that Mr. Manchin “is agreeing to a massive tax increase in the name of climate change when our economy is in a recession.”

“I hope that common sense will eventually win the day,” he added. “What I am hearing about the terms of this latest reconciliation deal make no sense.”

But in his own separate statement, Mr. Manchin cheered the agreement as good for the economy, the climate and people’s pocketbooks.

“Rather than risking more inflation with trillions in new spending, this bill will cut the inflation taxes Americans are paying, lower the cost of health insurance and prescription drugs, and ensure our country invests in the energy security and climate change solutions we need to remain a global superpower through innovation rather than elimination,” Mr. Manchin said.

He noted the bill is called the Inflation Reduction Act of 2022, making a clear distinction between it and the ambitious multitrillion-dollar domestic policy plan Mr. Biden proposed and Democrats in Congress spent most of last year toiling to pass.

“Build Back Better is dead, and instead we have the opportunity to make our country stronger by bringing Americans together,” he said.

Mr. Manchin also pre-emptively swatted away a lingering demand from some House Democrats to lift the cap on the state and local tax deduction as part of the final package, adding “our tax code should not favor red state or blue state elites with loopholes like SALT.”

The agreement falls far short of Mr. Biden’s initial proposals to vastly expand social safety net programs and pay for them by taxing corporations and high earners. But it is substantially larger than a package aimed at lowering the cost of prescription drugs and extending expanded Affordable Care Act subsidies that Democrats had reluctantly concluded was the most they could hope to pass this summer after Mr. Manchin privately told party leaders this month that he would not support any climate or tax proposals in the short term.

The two health care pieces would allow Medicare to directly regulate the price of prescription drugs for the first time beginning in 2023. It would also extend through 2025 an expansion of premium subsidies that Democrats first pushed through in 2021 as part of their $1.9 trillion pandemic aid bill, preventing a lapse at the end of the year.

The plan would raise most of its new tax revenue, an estimated $313 billion, by imposing a minimum tax on the so-called book income of large corporations, like Amazon and FedEx, that currently use tax credits and other maneuvers to reduce their tax rates below the 21 percent corporate income tax rate in the United States.

It would raise another $14 billion by reducing a preferential tax treatment for income earned by venture capitalists and private equity firms, which has long been a goal of Democrats.

The measure also includes a methane fee that will start in 2025.

Also included will be $60 billion to address the disproportionate burden of pollution on low-income communities and communities of color, $27 billion for a “green bank” aimed at delivering financial support to clean energy projects and $20 billion for programs that can cut emissions in the agriculture sector.

The announcement of the deal stunned environmental advocates.

“I honestly don’t know what to say,” said Samuel Ricketts, co-founder and senior adviser of Evergreen Action, an environmental group. “We’re going to need to see the details, obviously, but people have been hard at work to salvage a deal. This has the opportunity to be an enormous breakthrough for climate progress.”

Mr. Manchin said the plan includes a “realistic energy and climate policy” that will “allow us to decarbonize while ensuring American energy is affordable, reliable, clean and secure.”

“As the superpower of the world, it is vital we not undermine our superpower status by removing dependable and affordable fossil fuel energy before new technologies are ready to reliably carry the load,” Mr. Manchin said in a statement, which highlighted investments in fossil fuel energy as well as renewable power.

If the package is enacted, it could get the United States close to Mr. Biden’s goal, according to a summary of the deal put out by Democrats.