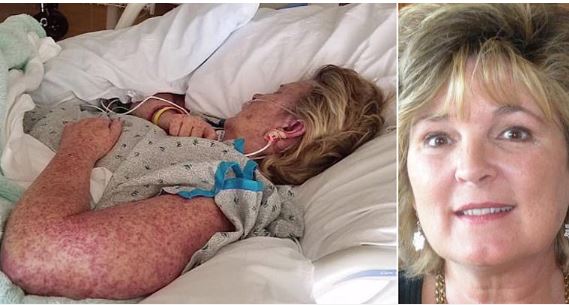 Tamela Wilson spent over 10 years working at the Meramec State Park in Missouri. Ticks and other bugs were a common occurrence for the outdoorsy 58-year-old. If she ever saw a tick crawling on her, she’d pluck it off and think nothing of it.

In May 2017, Tamela pulled two ticks off her body and continued on with her day. However, she felt strange symptoms within days and was diagnosed with a urinary tract infection.

Then came the extreme muscle fatigue, headaches, and skin rashes. Doctors admitted her to the hospital and said her white blood cells were low.

Yet here’s the weird thing: Tamela was tested for tick-borne diseases, but the results were all negative.

As the days passed by, Tamela and her family prayed for answers, but her health further declined. She then was diagnosed with hemophagocytic lymphohistiocytosis (HLH), an immune condition that caused more rashes to spread — even to her mouth.

“I’m a nurse and I’ve never seen anything like I’d seen my mother’s mouth,” Tamela’s daughter Amie said. “It got so bad toward the end she couldn’t talk, couldn’t drink, couldn’t eat — nothing.”

Then, nearly three weeks after being admitted to the hospital, Tamela passed away.

Now, her daughter Amie is warning everyone about an extremely rare tick-borne illness that ultimately took her mother’s life. Doctors say Tamela is only the fifth confirmed case of this life-threatening disease since it was first discovered in 2014.