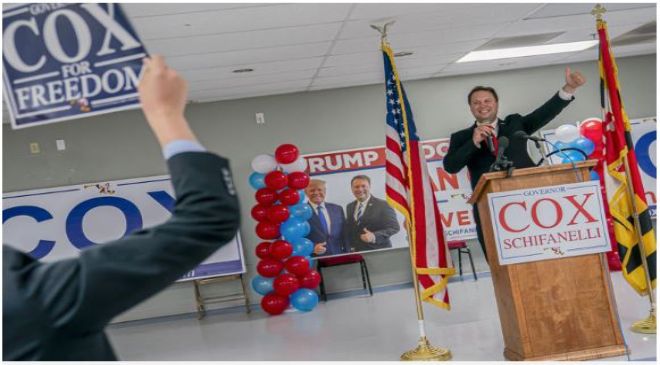 (Bloomberg) — Dan Cox won the Republican primary in the race to replace Governor Larry Hogan of Maryland, a race that became a proxy clash between former President Donald Trump and Hogan, a potential 2024 GOP presidential candidate.

The Associated Press called the race for Cox, a lawyer and state delegate, late Tuesday night.

Trump had endorsed him, while Hogan, who can’t seek re-election because of term limits, backed Kelly Schultz, who served in Hogan’s administration as secretary of labor and secretary of commerce.

Cox, 47, will face the winner of the crowded Democratic primary.

Trump issued multiple statements supporting Cox and participated in a telephone rally for him before Tuesday’s primary. He urged Maryland Republicans to pick Cox, who organized bus-loads of Trump supporters to attend the “Stop the Steal” rally before the assault on the US Capitol last year, over Schultz, 53, whom he labeled a RINO, or “Republican in Name Only.”

Hogan, a critic of the former president, championed Schultz as the more traditional and pragmatic Republican. He has said he’s considering a campaign for the GOP nomination in 2024 even if Trump runs again, as he has often hinted.

The Democratic Governors Association spent more than $1.1 million on advertisements in Maryland, according to AdImpact, that sought to elevate Cox as the perceived weaker Republican candidate in the general election. The ads emphasized how close Cox is to Trump as as his “handpicked candidate.”

Trump touts the victories of candidates he has endorsed in GOP primaries this year, but he has had several high-profile defeats — especially in Georgia, where Republican voters rejected David Perdue, his candidate for governor, and people running in other statewide offices. In all, 11 of his candidates have been defeated so far.