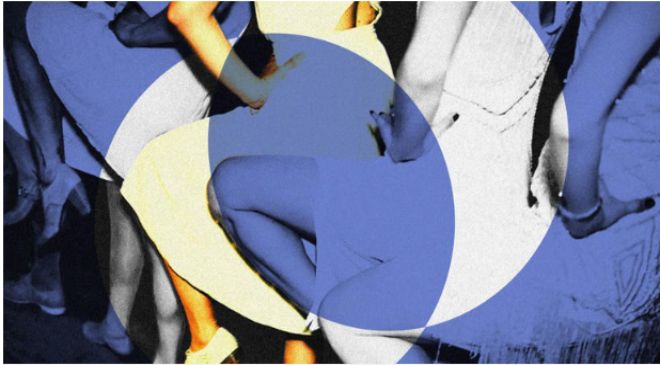 This summer, Rebecca Davis is getting married at the Picnic House in Prospect Park, a location she thought might lead to some confusion about what to wear. “If you see ‘Picnic House,’ you might think we’re having a picnic as our wedding,” she says. “I’ve been to those, where the bride’s barefoot, the groom’s in shorts, but that’s not our wedding. We didn’t want anyone showing up like they didn’t understand the assignment.”

On her wedding website, she explains that the dress code is “festive formal,” but that too could be confusing, so Davis, a writer and brand strategist who’s marrying data analyst Stephen Reader, created a Pinterest board to illustrate for guests what they should wear. For what she envisions as a “disco party in the park,” she included shots of Liza Minnelli in a purple silk jumpsuit, Bianca Jagger in a lamé halter-top dress, and David Bowie in chest-baring velvet. “I’m not normally a Pinterester,” Davis says, “but having two and a half years to think about a wedding, and being in a pandemic and stuck at home, I was like, Sure, I have time to find photos of Dennis Rodman in the ’90s.”

In the past, this kind of dictation about how to dress for a wedding might have elicited eye-rolling and earned the betrothed the label of “bridezilla,” but it’s been a long two years of ceremonies on Zoom with guests in loungewear. The couples who’ve been waiting for their big days are ready to go all out, as are the people they’ve invited to party with them. And for the most part, these guests aren’t minding being told — and, in many cases, shown — what to wear. At Davis’s bridal shower, guests were excited about the dress code. One woman pulled up a photo from the Pinterest board of Jennifer Aniston in a strapless red gown and gold necklace, clutching Brad Pitt, and told her table, “This is what I’m going for.”

In part, wedding dress codes have become more explicit (and essential) because we don’t dress up much anymore. And it’s not just the pandemic’s fault. “In the past, everyone might have known what to wear to a wedding,” says Richard Thompson Ford, a professor at Stanford Law School and the author of Dress Codes: How the Laws of Fashion Made History. “It’s a wedding. But now there are no norms, and you need to be told.”

This opportunity for direction has led to very specific dress codes, often with explainer pictures, for not only the wedding, but also often for the welcome parties, rehearsal dinners, and any other wedding-related gatherings. What was once printed in a tiny font at the bottom of the invitation (i.e., “cocktail attire”) now takes up significant real estate on the wedding website and is an increasingly important part of the entire event.

“The modern wedding is in many ways very much a kind of throwback,” Ford says. “It’s an opportunity for role playing and fantasy. It’s trending more toward the costume balls. The dress code fits with that element. This is a costume party, and here’s what to wear. You need to script that fantasy.”

For some couples, that fantasy is Bridgerton. Shelley Brown, senior fashion and beauty editor at The Knot, has seen a trend of Bridgerton-themed weddings, and, perhaps surprisingly, there hasn’t been much grumbling from guests about donning puff sleeves and trains. “We’re now in this collective state of mind where we want to celebrate, where we’re excited for things to go back to normal, and if that means you have to dress up like a character from Bridgerton, so be it,” she says. For a “colorful black-tie” wedding she went to, she gamely bought a bright fuschia floor-length gown, “in the dead of winter, before hot pink was having a moment,” and ended up glad she did. “Most people did follow the dress code,” she says. “I would have stood out if I was in all black.”

For Michaela Erlanger’s three-day April wedding weekend in Miami, to restauranteur William “Mac” Osborne, she had as many dress codes as there were days on the wedding invite. “No detail should be overlooked, including what your guests wear,” says Erlanger, who postponed her celebration twice so she could do it the way she dreamed of. “It’s just another detail of the curation. Literally every single detail of my wedding was customized and curated, from the invitation to what people wore to the ring bearer’s pillow.”

The first was “South Beach Chic,” for the “Meet & Mingle” party that kicked things off — “no one knows what that means,” she admits. So Erlanger, a celebrity stylist, did what she does for her clients, who include Lupita Nyong’o and Diane Kruger: She made a moodboard, a collage of photos of women in flouncy, sherbert-colored skirts, men in rumpled linen jackets and half-unbuttoned shirts, and the Art Deco rooftop pool where the event would be held, and uploaded it to the “Style” section on her wedding website.

She made another one for the welcome party (a “Tropical Cocktail” dress code, with pictures of women in sleek floral-print dresses and pantsuits, men in crisp baby-blue suits and bare ankles, and an aerial view of the dock on the Biscayne Bay they’d be dancing on). Then there was the actual wedding (black tie, with women in black lace gowns, men in classic tuxedos, and a wide shot of the Vizcaya Museum and Gardens, the Gilded Age estate they were getting married in). As her wedding website read, “Our wedding weekend will be a celebration of love, food and of course, fashion — so we encourage everyone to BRING IT with their wardrobe!”

“I had friends wearing Gucci runway, or who had custom dresses made,” Erlanger says. “This is kind of what we do. I was really proud of my friends and family. They all brought it.”

They brought it for Erlanger, but also for the wider audience watching on Instagram, the other reason why couples are obsessing over dress codes. “Everybody does it because of the photos,” says Nathalie Cadet-James, a wedding planner and the owner of Luxe Fête. “If you look at what really spreads quickly, it’s the bride with all her friends who aren’t bridesmaids who look like they’re part of the same chapter in the book.” Cadet-James herself followed Erlanger’s wedding on Instagram and was impressed by the way the guests fit into the themes set out for them. “She did that shit,” she says. “I was like, This is just gorgeous. Everyone played their part. It was next level.”

Some couples are getting as granular as spelling out not only the colors guests should wear, but which particular shades, as Nicole Jarbo, a tech entrepreneur in Oakland, California, did for her June wedding to special-education director Eva Huffman. She’d wanted the ceremony to be in a flower-and-plant-filled space in San Francisco — “I’m a city person,” she says — but her bride wanted a rural, rustic setting. Jarbo agreed to a barn in Monterey, but decided to use the dress code as a way to import lush colors: the shades of blue and green she describes in the “What to Wear” section of the wedding website. “When in doubt, opt for cool greens and warm blues,” she wrote. “For green, think emerald or hunter. Blues, try cerulean, sapphire, or royal blue.”

Below the text, she put photos of women and men in dresses and suits in those shades — an idea inspired by her former days instructing first-graders. “I thought, What would my first-grade-teacher self do?” she says. “Show a bunch of pictures of what’s appropriate.”

Immediately after seeing the dress code, one guest texted her, “What a bridezilla,” but plenty others told her it was helpful, which was Jarbo’s intention. She didn’t want guests confused and stressed about what to wear. “It’s about encouraging people, rather than negatively reinforcing them,” she says. “I think the suggestions were really expansive, but that’s because I made them.”

Those inclined to scoff at selecting exact shades guests should wear might heed this cautionary tale: For one wedding Cadet-James knows of, guests were asked simply to wear green. But the décor at the event was sagey, earthy green, and most people were in St. Patrick’s Day green. “The two weren’t good bedfellows,” Cadet-James says. “But they didn’t share a style guide. If they did, you’d know what to go for.”

Still, no amount of instruction, or glam photos, can make some guests follow the dress code if they don’t want to. Davis says that if her wedding disco party comes and she’s the only one in sequins, “that’s totally fine.” David Pressman, who runs David Pressman Events in Los Angeles and who’s been a wedding planner for 13 years, remembers only one wedding where every single attendee followed the dress code: a 20-person black-tie affair. “Other than that, no, I’ve never had everyone follow the dress code,” he says, “and at the end of the day, who cares?”

After all, there’s only so much you can control, as Lauren Rodriguez found out at her May wedding to artist Chase Hall in front of their house in the East Village. She made the dress code black tie because she wanted to enjoy the contrast of being married on the city street in front of a crowd in formalwear. On the day of the wedding, though, it poured. So when Rodriguez looked out at her 200 guests, she couldn’t see her friends, like model Paloma Elsesser in a vintage Issey Miyake Pleats Please gown or model, designer, and Kamala Harris’s stepdaughter Ella Emhoff in a velvet Vampire’s Wife dress. Instead, she saw only a sea of black umbrellas, which, she says, “was spectacular.”