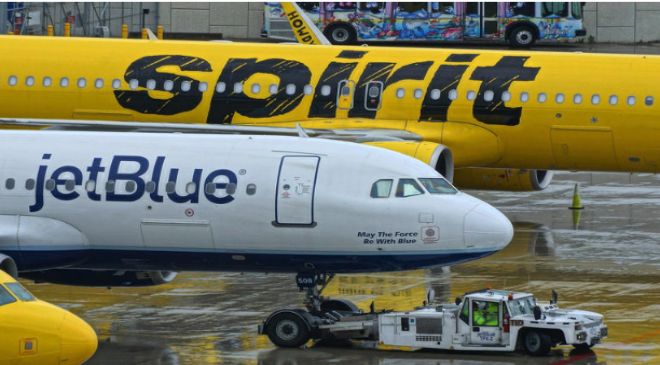 The race to become the fifth-largest US airline is in its final stretch, with the end of June just a mere couple of days away as Spirit Airlines is due to choose between Frontier Airlines and JetBlue Airways. To assert its persuasiveness in an attempt to sweep Frontier under, JetBlue has raised its offer yet again.

Frontier tried to take the lead

Just a week ago, JetBlue made its fourth proposal bid for Spirit. The proposal seemed almost too good to be true as it included the more profound obligation to divest assets and the increase in the all-cash premium share price. JetBlue was confident that Spirit would not look any other way through the improved proposal, especially with its handsome reverse break-up fee.

And recently, Chief Executive Officer of Frontier, Barry Biffle, has been making public statements about how the Spirit-JetBlue merger would never be as beneficial and risk-free, with one significant risk being the likely possibility of a block from the regulators. Another red flag would be that JetBlue would be in quite the monetary debt following a would-be successful merger. When compared to a Spirit-Frontier merger, Spirit would stand to gain more financially in the long term.

The public comments were tied with a full letter disclosed to the Spirit shareholders on Friday, further detailing an improved offer from Frontier regarding a raised cash consideration, bringing the total to approximately $450 million. In addition to the added cash consideration, Spirit stockholders will benefit from the upside of the pandemic recovery and share roughly $500 million in estimated annual net merger synergies. Frontier was not backing down.

The open letter from Frontier suggests that the Frontier-Spirit transaction can provide a proforma value of over $50 per Spirit share. Photo: Getty Images.

Determined to gain the upper hand, New York-based JetBlue modified its proposal by adding a ticking fee. The ticking fee mechanism would provide Spirit shareholders with a monthly prepayment of $0.10 per share between January 2023 and the consummation or termination of the transaction. This represents an estimated aggregate ticking fee of up to $1.80 per share, of which the first $1.15 per share in payments will offset the reverse break-up fee or the merger consideration.

Any payments in excess of the $1.15 per share will be incremental to the total purchase price of $33.50 or the reverse break-up fee. This increases the total transaction consideration to up to $34.15 per share in the event the transaction is consummated and complete downside protection to $4.30 per share, or approximately $470 million in the aggregate, in the event the transaction is terminated. And speaking of the reverse break-up fee, JetBlue has yet again enhanced it to become $400 million payable to Spirit.

The low-cost carrier is showing all its cards with an enhanced accelerated prepayment of $2.50 per Spirit share, structured as a cash dividend to Spirit shareholders should the vote be in favor of JetBlue. Regarding a revised offer, Hayes said:

“The entrenched Spirit Board has approved a revised deal that is ultimately better for Frontier and its controlling shareholder than it is for Spirit shareholders.”

Hayes says that Spirit shareholders should not be misled by Frontier’s rosy projections of a potential future stock price, which are flawed as it fails to account for actual market conditions. Photo: Airbus

Choosing between the low-cost carriers

For several months, this merger competition has seen plenty of bids, offers, and remarks from Frontier and JetBlue. As it will soon come to an expected dramatic end, Spirit has both pros and cons to deal with on either choice. Between Frontier, which has the financial means in the long run, versus JetBlue, which has the network and reputation. Then again, with just a few days left, either party could pull another last-minute attempt ahead of the other.