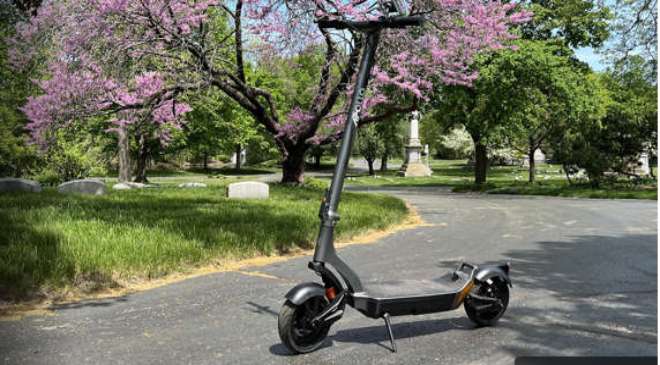 The Apollo City 2022 is a redesign of the original Apollo City and a lot has changed. It’s bigger, faster and far more stylish, to the point where its unfair to consider this an upgrade. It is, in all but the name, a new product.

Apollo is a Canadian company that produces a range of electric scooters, which it divides into three ranges: casual, commuter and expert. The Apollo City 2022 (like its predecessor) sits in the middle commuter category, which scares me to even think about how powerful the expert models are.

This is an appropriate category for the Apollo City 2022 though, as it feels like a scooter perfectly designed to take those trips into the office. While smaller, lighter scooters feel like a replacement for a bicycle or a walk, this one feels like an alternative to a moped or taxi.

I had the chance to try out a prototype version of the Apollo City 2022 around the streets and cycle paths of Chicago over a few weeks. While Chicago’s roads aren’t known for their smooth surfaces, there are a wealth of cycle lanes and routes to get around the city. I have a few test routes that I like to take electric scooters on that take in a bit of everything, so I put the City 2022 through its paces on those. For more about how we review products, see T3’s how we test page.

Though Apollo only ships across North America, it does have dealers in the UK (such as Ride and Glide) and Australia that stock most models, including the City 2022.

As electric scooters go, the Apollo City 2022 is on the larger side. End to end it measures around 49 inches (124cm) long and it stands around 49.5 inches (126cm) tall. The deck is around 8 inches (20cm) at its widest point allowing even those with bigger feet to keep most of their shoes on the surface, which helps with stability.

It’s also on the heavier side, weighing in at 57lbs (26kg). This is due, not only to its size and aircraft-grade aluminum frame, but also the substantial 48V 13.5Ah battery and 500W motor. That weight increases further on the City Pro to 65lbs (29.5kg) due to a larger 18Ah battery and dual 500W motors.

It’s certainly not giant but it’s noticeably bigger than models like the Yadea KS5 Pro and the Segway Ninebot Max G30LP. When folded down, it’s still possible to carry but you probably wouldn’t want to be lifting up and down flights of stairs every day.

There’s a lot of benefit to the size and weight of this scooter, as I’ll come to later, but most importantly it feels extremely solid and well made. It features IP56 water resistance, which means not only can it cope with a little wet weather, you can put your power hose on it to clean it without risking damage.

One of the first things I look for on a scooter is the tires. The Apollo City 2022 features chunky 10×3.5-inch air-filled tires to absorb some of that nasty road noise and for the bigger bumps, there’s a triple spring suspension system – two on the back and one on the front wheel.

The steering column is chunky and when the quick release clamp snaps into place it stays solid. The handlebars spread wider than many scooters too, giving you more control over the steering, which is very useful at high speed. The steering does lock at around 45 degrees in each direction, which is sensible when going at speed but can make steering around obstacles while walking beside it a little tricky.

There’s a lot happening on the handlebars. There are separate front and rear brake levers for the drum brakes and a thumb regen electric brake on the left side – matching the thumb throttle on the right. This does mean that you can stop and go using your thumbs – barely touching the regular brakes – but it does feel overwhelming. Not least because there are two more buttons on each side and a bell on the left. Those buttons are the power button which doubles as the drive mode with a double press and the lights, which changes between trip and odometer with a double press. The final two buttons might surprise you. They’re indicators.

Yes, the Apollo City 2022 not only features a powerful front LED and rear light (which also lights when braking) but it has orange indicators that flash on the left or right side of the deck when the buttons are pressed. Switching to one arm steering to signal isn’t really possible on a scooter, so this is a great addition for letting other vehicles know where you’re heading and makes it even more suited to the commute.

My only real gripe with the Apollo City 2022, apart from the abundance of braking options, is the catch that holds the folded steering column to the base for carrying. This large metal hook folds out of the top of the column and extends about three inches. if you are holding the scooter by the steering column, it stays in place, but left on the ground it easily comes unhooked. This feels like an easy fix but it is annoying if you are carrying it, or folding it, regularly.

The Apollo City 2022 has a top speed of 27mph and a range of up to 30 miles. That blows all but those big off-road models out of the water, and that’s just the standard model. The City Pro takes it up to 32mph and a 38-mile range.

Needless to say, this thing is quick. Probably quicker than you’d ever really need to go on an electric scooter and certainly faster than I was comfortable with going around other vehicles and bikes. But it’s nice to have. With lower-powered scooters I find myself riding them flat out at all times, to eek every last bit of power out of them, whereas with the Apollo city 2022, I found a speed I was comfortable with – usually around 20-22mph – and stuck to that.

It does feature a cruise control function that automatically kicks in when you maintain a speed for a set number of seconds – this is changeable on the app and can also be disabled. This means that you can easily find your speed and stick to it, without having to go all or nothing on the throttle. It also copes very well with inclines, despite being rated for just 10% – it didn’t slow when I took it up far more.

One thing to note is that you won’t get the full 30-mile range if you’re using this at close to full power. I got around 15 miles before I got down to one bar on the battery level and would have struggled to get to 20 miles without crawling it along. Still, that’s plenty of range for most users, and still much more than most models offer. It also recharges in less than five hours, so you can easily charge it either at home or at work.

The combination of the 10-inch tires, suspension and a bit of added weight meant that the ride on the Apollo City 2022 was always smooth, no matter the surface. Despite the size of it, the suspension allowed me to jump the scooter to avoid larger bumps and holes when going along a dirt track – I wouldn’t advise doing it on the road though.

Apollo informed me that the suspension will be a little stronger on the final version, as well as the brakes made stronger and the throttle smoother. This is good news on the brakes as I did find the drum brakes a little hard to stop with but the regen brake was very effective, especially when slowing from speed.

The central LCD displays a lot of information, perhaps more than needed at times, but it was always easy enough to read the speed when traveling. The rest of the info you can actually get from the app. The app is actually very good, as it provides simple and clear information, access to all the scooter settings as well as it’s own mapping. The idea is that you can attach your phone to the handlebars using the phone holder add-on and use the app as either a larger speedometer or a sat nav.

The Apollo city 2022 is by far the most impressive electric scooter I’ve tested to date. It’s extremely well made, has plenty of power and rides really smoothly. Apollo categorizes this as a commuter model and I think that’s a great description. If you just want something lightweight to get to the bus or train quicker, this is probably more scooter than you need and you’ll find it prohibitively heavy to carry on board. However, if you are looking for something to take you door to door, with something sturdy enough to cope with busy roads, it’s a great pick.

Though initially, I was skeptical about the need for the indicators, I ended up using them regularly when on the road and wouldn’t want to be without them now. Even if you don’t plan to speed along at 27mph, having that speed in reserve helps, especially from a standing start.

The one thing I’ve not really mentioned is the price. For what you’re getting here, I feel the Apollo City 2022 is great value. Yes, it’s more expensive than most standard electric scooters but it’s a fraction of the price of the range of 30mph+ off-road models that it takes on, and in many ways, it’s even better.

The Apollo City 2022 is a great scooter but it’s not for everyone. It answers a niche among scooter riders that want something fast and solid rather than small and light.

If you’re looking for something a little more portable in the UK, you should definitely consider the second-generation Pure Air Pro. This is a powerful scooter with 10-inch tires and a 31-mile range. Yes, it’s limited to 15mph but as that’s the legal limit, it’s probably for the best.

US riders on the other hand might want to look at the Segway Ninebot Max G30LP. This is a relatively big scooter but much smaller and lighter than the Apollo and still offers a respectable 18.6mph top speed.

If it’s more power that you’re after, the Apollo range has you covered for more. The City Pro is identical to the City 2022 but adds a larger battery for more range and dual motors giving you up to 32mph. It’s an extra $300 but if this is your main mode of transport, it’s worth the extra spend. Want even more? Try the 34mph Apollo Ghost or the 38mph Apollo Phantom V2.