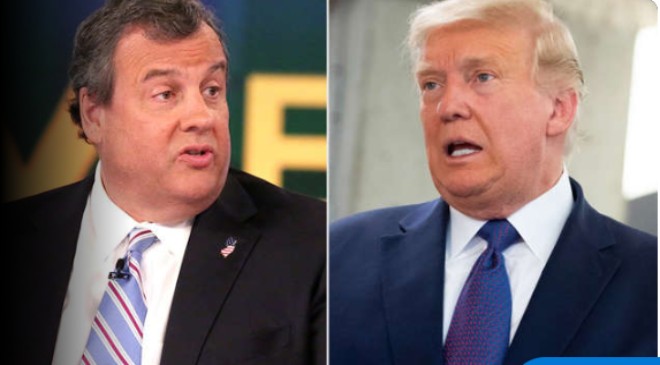 Former New Jersey Gov. Chris Christie came up with a clever comeback for one of Donald Trump’s favorite insults.

After Christie showed up in Georgia with two other former governors, Doug Ducey of Arizona and Pete Ricketts of Nebraska, to support Gov. Brian Kemp’s reelection campaign, the former president fired off a statement to express his disdain for the GOP surrogates.

“Today, the worst ‘election integrity’ Governor in the country, Brian Kemp, loaded the great state of Georgia up with RINOs,” Trump said, using the acronym for “Republican in name only.”

“That’s right, he had them all,” Trump continued, naming Kemp’s trio of high-profile supporters. “That tells you all you need to know about what you are getting in Georgia — just a continuation of bad elections and a real RINO if you vote for Brian Kemp.”

Christie tweeted a response on Wednesday. “Insightful commentary about three Republican Governors who were overwhelmingly re-elected by their people from a former President who lost to Joe Biden. Maybe the ‘R’ in RINO really stands for re-elected,” Christie wrote, adding that he was “proud to stand with” Ducey and Ricketts in support of Gov. Kemp.

Christie is a former ally who led the Trump transition team as he entered the White House in 2017 and later helped him prep for debates with his 2020 opponent, Democrat Joe Biden. Christie broke away from Team Trump when he refused to concede the election to the winner, now President Biden, calling his legal challenges over the results and his conspiratorial claims about the loss a “national embarrassment.”

Trump continues to repeat false claims of 2020 election fraud, despite a lack of evidence and the fact that Biden is nearly 500 days into his presidency.

Gov. Kemp is a favorite target of Trump’s grumbling due to his decision to certify Georgia’s 2020 election results, which added the state’s 16 electoral votes to Biden’s count.

Trump has endorsed Kemp’s primary opponent, former Sen. David Perdue, who’s made the so-called “rigged and stolen” election a theme in his campaign. (Perdue also lost in the same election cycle when Democrat Jon Ossoff defeated him in a January 2021 run-off vote to represent Georgia in the Senate.)

Across the country, political players are keeping a close eye on Trump-endorsed candidates to see how they fare — and to gauge the former president’s influence on the GOP — as November’s midterms approach.

Voters head to the polls for Georgia’s Republican primary May 24. The winner will face Democrat Stacey Abrams, who’s running unopposed in her party’s primary.

Christie is reportedly “seriously considering” running for the Republican nomination in 2024.