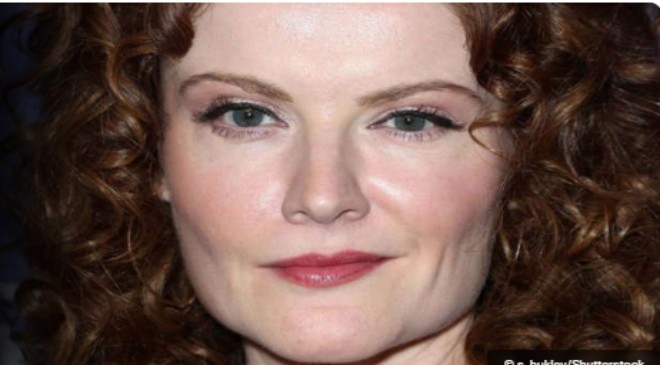 Adapted from the British series of the same name, “Ghosts” is a sitcom about a married couple whose lives are turned upside down when they inherit a house full of, you guessed it, ghosts (via Collider). Starring Rose McIver as Samantha and Utkarsh Ambudkar as her husband, Jay, the narrative follows the pair after they are left an idyllic country estate by one of Sam’s distant relatives. However, their dream soon turns into a nightmare when they realize that the house is in disrepair and the grounds are haunted by the souls who died there. While Jay is blissfully unaware of the ghosts presence, Sam, who has survived a near-death experience, can communicate with them.

Actress Rebecca Wisocky portrays Hetty Woodstone, Sam’s ancestor and the original owner of the estate (via IMDb). Hailing from a different time period, Hetty’s outdated views often conflict with Sam’s more progressive ideas. Wisocky is a seasoned actress and she utilizes her abundant talent to bring Hetty to life.

For some viewers, the actress who plays Hetty is a familiar face. If you’re not sure where you’ve seen Rebecca Wisocky before, then we’ve got you covered. Here are some of the projects you might recognize her from.

Wisocky Appeared In A Few Episodes Of American Horror Story

Fans of “American Horror Story” know that each season features a new storyline with a revolving cast that portrays different characters with every new installment. Rebecca Wisocky appears in three episodes of the first season as Lorraine Harvey (via IMDb). Titled “AHS: Murder House,” Season 1 does a great job of reeling in the audience with a classic haunted house narrative, complete with ghosts aplenty. Lorraine Harvey is a minor character, but her storyline is no less affecting.

“Murder House” focuses on the Harmon family, who move to Los Angeles hoping for a fresh start. Soon after moving into their new home, family patriarch Ben Harmon (Dylan McDermott) is followed by a mysterious man with burn scars. This man is Larry Harvey (Denis O’Hare), a former occupant of the Murder House. In the hopes that he can save the Harmon family from their doomed fate, Larry reveals that he once lived in the house with his wife Lorraine (Wisocky) and their two daughters. Larry fell in love with Constance Langdon (Jessica Lange) and planned to leave his wife. In a fit of despair, Lorraine set fire to the house, killing herself and her children. Like all the other poor souls who perished in the Murder House, Lorraine’s burnt specter still haunts the premises. Although her appearances are brief, Wisocky expertly evokes Lorraine’s pain and twisted determination.

She Played Brenda Shettrick On The Mentalist

“The Mentalist” stars Simon Baker as Patrick Jane, a former con man and fraudulent psychic medium. After the brutal murder of his wife and daughter at the hands of serial killer called Red John, Jane teams up with the California Bureau of Investigation (CBI) in Sacramento to use his powers of perception to help solve murders, all the while hoping that he’ll finally apprehend the killer who destroyed his family.

Rebecca Wisocky appears as Brenda Shettrick in nine episodes of “The Mentalist” (via IMDb). As the head of the bureau’s media team, Brenda frequently deals with the press and public relations. Initially portrayed as an affable character, viewers were shocked when it was eventually revealed that Brenda has been leaking sensitive information from within the organization. Brenda’s actions lead to several high profile criminals evading justice, although Jane ultimately catches her in the act. Brenda’s fall from grace really packs a punch, made all the more memorable by Wisocky’s subtle performance.

You Might Recognize Wisocky As Evelyn Powell From Devious Maids

Created by Marc Cherry, “Devious Maids” is a series that follows the lives of a group of Latina maids who work for some of the wealthiest and most prominent families in Beverly Hills, California (via IMDb). Rebecca Wisocky plays Evelyn Powell, one of the best characters the show has to offer. In many ways, Evelyn is a stereotypical rich housewife, but Wisocky’s exceptional line delivery and comedic timing are main sources of the show’s humor. As the narrative unfolds, viewers learn that there’s much more to Evelyn than meets the eye and Wisocky shoulders the transition with finesse. On the surface, Evelyn appears to be shallow and conceited, qualities that she uses to mask her pain at being trapped in a loveless marriage. Evelyn is a key player in Season 1, which starts off with the shocking murder of the Powell’s housekeeper, an event that prompts the titular maids to work together to find the culprit.

Wisocky has appeared in a few Cherry productions, including guest appearances on “Desperate Housewives” and “Why Women Kill.”

Over the course of eight seasons, “Brooklyn Nine-Nine” features some stellar guest stars, including Rebecca Wisocky. The actress appears in the Season 8 premiere, an episode titled “The Good Ones” (via IMDb). Like most episodes of “Brooklyn Nine-Nine,” the season premiere features a few different storylines, including how the environment of the precinct has changed in the wake of the coronavirus pandemic.

One of the main plotlines follows Jake’s (Andy Samberg) attempts to get Rosa (Stephanie Beatriz) to rejoin the force after she quit following the George Floyd protests. Jake enlists Rosa’s help in a case that deals with police brutality, although their efforts are continuously hindered. They finally get the evidence they need, but Captain Lamazar (Wisocky) deletes the information, fearing repercussions. Wisocky does a fabulous job of portraying the long-winded, heavily accented captain in an episode that gracefully handles sensitive issues while still doling out the show’s signature brand of humor.