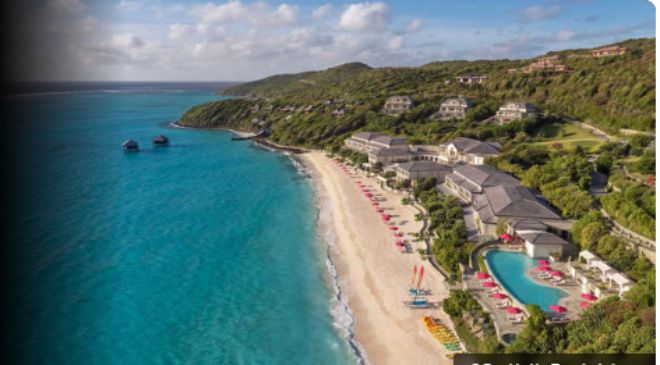 Blank, baffled stares. It’s what I was met with when I told people I was heading to Canouan, a petite, three-square-mile island — just one of 32 within the string of St. Vincent and the Grenadines. “Where’s that?” my friends, even the most well-traveled ones, would ask. I pulled up a map on my phone, dragging my finger along the Caribbean Sea, pinching the screen in and out, eventually pointing to a question-mark-shaped speck surrounded by Barbados, St. Lucia, and Grenada. I waited for a glimmer of detection. “Never heard of it,” they’d say. The truth is, I hadn’t either.

Canouan is something of an enigma in the Caribbean: Just a 45-minute flight from beloved Barbados, it has managed to remain a secret, save for a privy few — an in-the-know crowd who comes to moor their million-dollar yachts (Robert Downey, Jr.) or dodge the paparazzi (George Clooney, Leonardo DiCaprio). It’s even been touted as a “place where billionaires go to escape millionaires.”

Not long ago, though, the island was without running water or paved roads, and it tallied more turtles than human residents. Now, there’s a runway for private jets, a flurry of new luxury hotels and villas, and a multimillion-dollar marina for mega yachts. Yet, arriving here still feels like unearthing something new.

From the plane, Canouan mimics many other Caribbean islands: turquoise waters, interrupted only by emerald-green hills and slick, masted sailboats — every tropical destination cliché is on full display from above. Up close, as the island quietly unfurls, roads reveal locals gathering on the streets of a small, lively village and unfettered ocean views at every bend. There are no packs of cruise passengers, no tawdry tchotchke shops, no overdeveloped swathes crammed with hotels and restaurants. Instead, here, traffic means breaking to let turtles pass (Canouan is the Carib word for “island of turtles”), and the nature is so unspoiled you feel as if you’re one of the first to visit. Even better, it all sits just below the hurricane belt, steering clear of storms that historically hammer the region, so there’s no bad time to visit.

The allure is apparent, so its pleasantly hushed profile is, then, perhaps due to its relatively remote address, one that can be reached via private charter, though ferry and commercial flight service — the latter stopping on several other islands — are also options. (Mandarin Oriental’s own jet also makes the 20- to 25-minute jump from hubs like St. Lucia, Barbados, St. Vincent, and Grenada.)

We flew from New York to Barbados, where a dedicated team whisked us to our private charter on SVG Air, looking after our luggage and pandemic paperwork. Twenty minutes after touching the tarmac, we arrived at the Mandarin Oriental, a gorgeous, gated resort that rebooted the Pink Sands Club in 2018.

Sitting on a 1,200-acre estate, the beachfront property doesn’t need to promote itself as a luxe hideout: The 26 suites and 13 villas, all of which face the beach and have personal butlers, are proof enough. Suites are more than spacious, starting at 1,300 square feet, with marble bathrooms and a terrace or garden mere steps from the sand — a view only made better with a glass of fresh watermelon juice in hand. And while chic, removed-from-the-world accommodations are customary in the Caribbean, the Mandarin’s multistory hillside villas are in a league of their own: Private infinity pools, outdoor patios, elevators (in some), and more than 5,000 square feet of space are standard in each plush perch.

Despite this being the Mandarin’s first Caribbean outpost, the hotel acknowledges its origins with signature bursts of pink, from the umbrellas dotting the beach to the loungers by the stunning infinity pool that seemingly drops into the ocean.

The resort’s luxury credentials count toward its food, too, whether you choose to fuel up at one of the fine-dining establishments, in your suite, or directly on the beach for a private torchlit meal, toes in the sand and all. (Order the saltfish and coconut dough boy for breakfast.) The hotel can even arrange a castaway-style picnic on a secluded beach for a very Robinson Crusoe-esque experience.

Canouan Estate (a shorty dinghy ride away) also has two tasty restaurants — L’Ance Guyac and Shell Beach — and Soho Beach House, also new on the island, and Shenanigans are great for those who want to venture off the estate. No matter where you eat, though, kick off the evening with a sundowner at Turtles, a cocktail bar that looks like it was yanked from the Hamptons.

And then there’s the spa: Not succumbing to environmental limitations, the treatment cabanas are all tucked directly against a mountain overseeing the water. The property also recently debuted two overwater villas with an outdoor balcony, steam shower, and glass floors so guests can gaze at the cerulean waters as they drift off during a massage, facial, or body scrub.

There’s lots to engage active travelers, too, like a round of golf at the Jim Fazio–designed course followed by sunset cocktails on the 13th hole, or taking out a catamaran, stand-up paddleboard, or kayak.

One morning, I opted for the short — albeit deceivingly steep — climb up Mount Royal with Kezzy, the Mandarin’s nature guide. Pumping my arms and hoisting my knees high to keep the momentum going, I pulled my way to the 877-foot summit — the highest point on the island — pausing to appreciate the tortoises and soldier crabs with whom we shared the trail, until a hummingbird flitting between branches commandeered my gaze down. Reaching the peak instantly erased my memory of the effort it took to get there: Stunning views, including neighboring Mustique, Union Island, and Petit St. Vincent, unravel in every direction. I asked Kezzy, who tackles the trail almost every day, whether he tires of the view. “Never,” he said.

This seems to be a theme on the island. Another morning, we sailed out to Tobago Cays, cradling five uninhabited islands and a protected coral reef with some of the best snorkeling in the Caribbean. Somewhere between swimming alongside a trio of green turtles and spotting a school of stingrays and sea urchin, I thought to myself, this is too good to be true. Later that afternoon, as we bobbed back toward the hotel on our catamaran, our guide, unprompted, shared: “I love the water. Every day is different — it doesn’t get old.”

Though few activities exist beyond the gates of the Mandarin, there’s no need for a jammed itinerary. Most days, I found myself moseying to the sand in front of my suite more than a dozen times a day, dipping my toes in for a moment, watching the waves slow dance in the evening breeze. In the afternoon, I’d linger on a lounger with a book, finishing each chapter with a dip in the ocean.

On my final day, I snapped one last photo of the ocean, translucent under the midday sun, and texted it to a friend with the caption, “We have to come back.” After all, I’m not one to keep a secret.