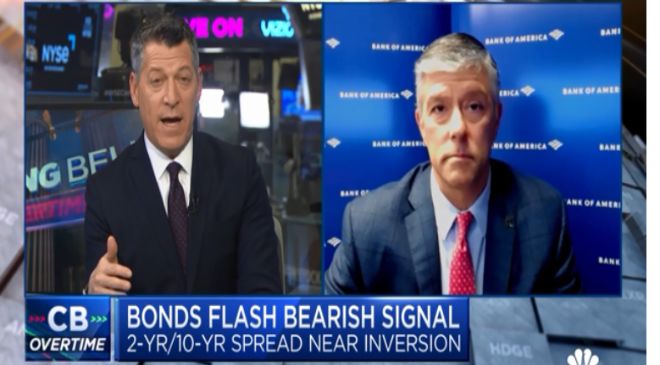 U.S. equities futures dipped slightly Tuesday evening after stocks extended their rally in the previous session, even as fears of an inverted yield curve sparked recession concerns and investors continued watching developments play out in Ukraine.

“The market’s now up almost 10% in the last 10 days, so we’ve had a pretty incredible rally in a very short time with not a whole lot of news change except that we actually have more rate hikes priced into the market,” Stephanie Lang, chief investment officer at Homrich Berg, told CNBC.

“This has been a nice ride,” she added. “But I wouldn’t get too comfortable for the rest of this year, because I think we’re going to continue to see a lot of volatility.”

All eyes were on the bond market Tuesday as the U.S. 5-year and 30-year Treasury yields inverted Monday for the first time since 2016. Historically, this inversion has been a sign of a coming recession, though it hasn’t been a good indicator of when the recession would come. Still, investors largely shrugged off the event.

On Tuesday, the main yield spread traders watch, that between the 2-year and the 10-year rate, came close to inverting but stayed positive.

“The big talk right now is that at any given point in time, recession can be on the horizon,” Lang said. “Typically, you won’t see a recession for an average of 20 months once a yield curve inverts. Our antennas are up that recession risk is heightened; that doesn’t necessarily mean that there’ll be one this year, though next year is more of a concern for us.”

Esther George, president of the Federal Reserve Bank of Kansas City, will speak to the Economic Club of New York.

BioNTech and Five Below will report earnings before the opening bell.