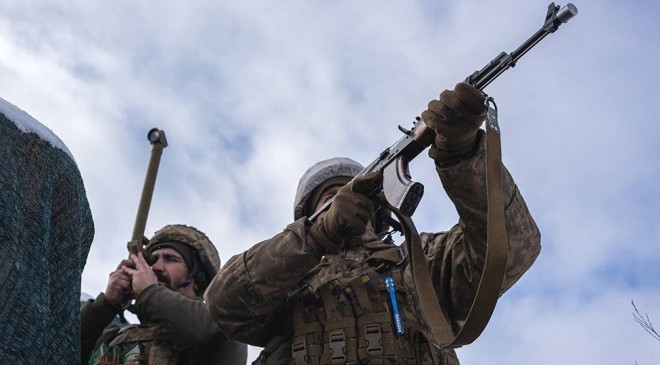 The fierce Ukrainian resistance is defying the battlefield odds, turning the tide against a superior Russian force. Observers are whispering the once unthinkable — that Ukraine might win. But what would victory look like? Even in triumph, would Ukraine emerge whole?

The risk of the Kremlin achieving its apparent initial objective — the decapitation of the Ukrainian government and the complete subjection of its neighbor — seems to be receding. Demoralized and wounded, the Russians are falling back from the Ukrainian capital, Kyiv. The Kremlin’s Plan B, as suggested by its own generals, still appears to be some form of partition — or keeping parts of Ukraine, if not the entire nation, under long-term Russian control.

But how much? Gen. Kyrylo Budanov, Ukraine’s chief of the defense intelligence, warned last weekend that Moscow “will try to pull the occupied territories into a single quasi-state structure and pit it against independent Ukraine.” He compared the Russian endgame to the splitting of the Korean Peninsula in the 1950s. There’s reason to believe, he said, Russian President Vladimir Putin “will try to impose a dividing line between the unoccupied and occupied regions of our country. In fact, it is an attempt to create North and South Korea in Ukraine.”

The Korea comparison, however, fails on several fronts. North Korea was armed and trained by the Soviets. But its invasion of the U.S.-backed South was a brother-against-brother conflict. Ukraine, in comparison, is instead suffering a wholly foreign invasion.

If anything, scholars say, the Ukraine situation smacks more of the Winter War of 1939, when the surprisingly resilient Finns held out for months against Soviet Russia. Fierce fighting ended in a truce that saw Finland maintain a measure of independence, if not full territorial integrity. The biggest price of peace: Soviet annexation of a swath of Karelia, a border region stretching from the White Sea coast to the Gulf of Finland.

Ukraine, to buy peace, may need to suffer a similar territorial loss — but perhaps not nearly as great as the Russians had hoped.

The war in Ukraine really started nearly a decade ago. Furious over a civil uprising that drove out a sitting president and tilted Kyiv toward the West, the Kremlin annexed the southern Crimean Peninsula in 2014, effectively severing it from Ukraine, which still claims Crimea as its own. Moscow also sponsored separatists in the eastern Donbas provinces of Luhansk and Donetsk, which Putin recognized as independent in his prelude to invasion last month.

Those Russian strongholds in the south and east are separated by hundreds of miles of coast and land. If Moscow wanted to create a vassal state loyal to the Kremlin, it could seek to divide Ukraine roughly down the Dnieper River. That would give the Kremlin not only a lock over Crimea and Donbas, but key ports, industrial centers and fertile lands across the east and south.

But the surprising weakness of Russian forces, military experts say, makes such a strategy seem overly ambitious now. Instead, Moscow may be aiming to link Crimea and the eastern provinces via a land bridge, by controlling a strip of land along the Ukrainian coast and the eastern Russian border that creates a contiguous if narrow link between its strongholds. To do that, the Russians would need to hold the strategic port city of Mariupol — one major reason, analysts say, for Moscow’s ruthless and ongoing siege of the city.

Yet even achieving that limited goal may now be hard — and not just because of Russia’s military weakness.

But, as foreign policy experts Jana Kobzova and Svitlana Kobzar argued after the Russian annexation of Crimea, language in Ukraine is not necessarily a judge of loyalty. During the 2013 Maidan protests that became the seed of Russian aggression, polls showed 15.6 percent of demonstrators spoke only Russian, while 24 percent spoke both Russian and Ukrainian, Kobzova and Kobzar wrote.

Since then, the sense of Ukrainian identity, even among Russian speakers who harbor deep Soviet-era nostalgia, has increased in the areas Russia needs to hold a land bridge. A 2017 survey of the south and east by the Kyiv International Institute of Sociology that stripped out separatist-controlled Donbas and annexed Crimea — both areas where pro-Russian sentiment has been reinforced over the years — showed that around three-fourths of respondents possessed a strong Ukrainian identity, compared with only 10 percent who tilted toward Russia. Compare that to 2014 figures, which included the occupied territories, showing two-thirds in the east and south felt “Ukrainian,” while 23.8 percent felt “Russian.”

Observers say the current Russian war has almost surely hardened pro-Ukrainian sentiments. Putin’s plan may be to depopulate the south and east of pro-Ukrainians, the way the Russians have already done in separatist-controlled Donbas. But experts warn that the extent of pro-Kyiv sentiment in those areas will make them hard to capture, and even harder to hold.

“Historically, they tended to be sympathetic to Russia as a state … [but] that changed in 2014, and a lot of that population became hostile to Putin,” Gerard Toal, professor of international affairs at Virginia Tech, told me.

He added: “Now it’s all about Putin. … It’s driven a lot of people off the fence, and they are firmly Ukrainian.”

Yet Ukraine may find it equally impossible to retake Crimea or its eastern provinces. As Toal and his colleague John O’Loughlin told me, public opinion in Crimea appears to be genuinely pro-Russian. In occupied Donbas, they estimate, at least 1 in 4 citizens now carry Russian passports. A January survey published in The Washington Post showed that a slim majority of respondents in Donbas (both in government and separatist controlled areas) didn’t really care what country they lived in, as long as they are doing economically well.

On Sunday, separatist leaders in Luhansk threatened to hold a referendum on joining Russia. That suggests Moscow may seek to absorb parts of Donbas the way it did Crimea, rather than support them as independent republics, the way it did with Georgia’s breakaway regions of South Ossetia and Abkhazia.

During peace talks in Istanbul on Tuesday, the Russians and Ukrainians seemed to concede to realities on the ground. Deputy Russian Defense Minister Aleksandr Fomin pledged that Moscow would “drastically, by multiples, reduce military activity” around Kyiv — a promise U.S. officials said they would believe when they see. Ukraine’s side, meanwhile, outlined a deal in which they would maintain the kind of military neutrality sought by Moscow in exchange for security guarantees from Kyiv’s international partners.

The Ukrainians, for the first time, also offered to refrain from trying to retake Crimea, whose status, they said, could become the subject of 15-year talks. The future of the occupied areas in the east, the Ukrainians added, could be discussed in separate negotiations between Putin and Ukrainian President Volodymyr Zelensky.

That suggests an acknowledgment by Ukraine that it may not remain entirely whole. Yet any outcome that restricts Russian gains to Crimea and parts of Donbas would still be seen as a Ukrainian victory — giving Putin a little more than he had before the invasion.

The high price for Moscow, meanwhile, will have been a Russian economy crippled by sanctions, diplomatic isolation by the West and the countless lives of Russians soldiers.