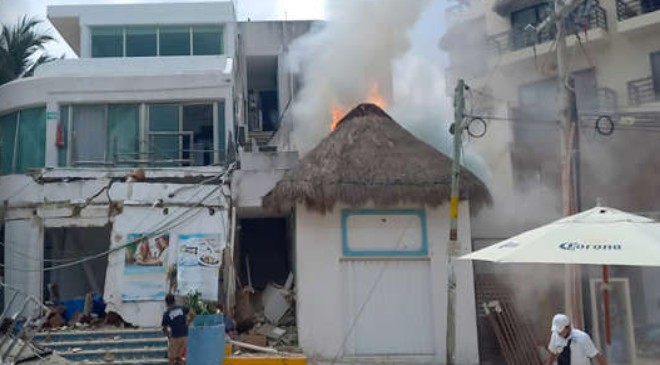 Two bodies were found in rubble created by a gas tank explosion Saturday at a restaurant in the Mexican beach town of Playa del Carmen, where 18 others were injured, officials said.

One of the two deceased remained at the scene of Kool Beach restaurant as a specialized rescue and recovery team was en route from Cancún, roughly 40 miles north, said the civil protection office of the state of Quintana Roo.

The other body was in the custody of the local medical examiner, it said.

Injured survivors, divided evenly between men and women, were all Mexican nationals save for a woman who was identified only as a citizen of Brazil, the civil protection office said.

They were taken to three different hospitals. Exact medical conditions of the survivors were not available.

According to Associated Press, most of those hospitalized are workers the eatery.

No Americans have been reported dead or injured. Playa del Carmen is popular with North American tourists as well as those from overseas, but March marks the end of its rainy season and beginning of the Caribbean coastline’s hottest days.

The source of the explosion was described by civil protection authorities as LP gas tank, or one that contains liquified petroleum. Propane and other forms of the gas are popular for cooking, especially at open-air eateries in Mexico.

State police chief Lucio Hernández tweeted Monday that the tank was inside the kitchen of the Kool Beach restaurant, where gas may have accumulated before igniting.