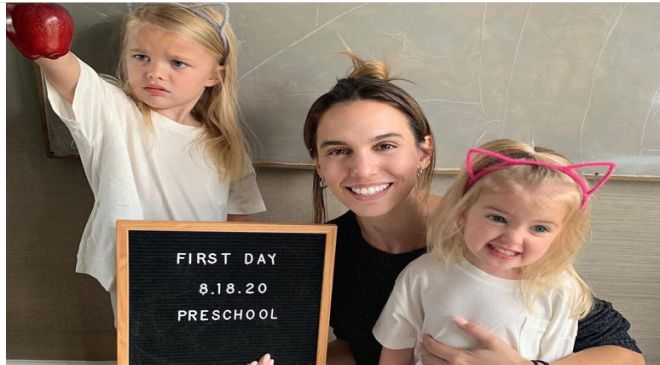 After relocating to Austin, Texas, the former Broadway star told PEOPLE at the first-ever 90s Con that she hasn’t gotten to “see enough theater.” Nonetheless, she still tries to expose her daughters — Isabella, 5, and Sophia, 3, whom she shares with husband Brendan Rooney — to the performing arts as much as possible.

“In Austin, there’s a really great theater company called ZACH Theater,” the 90s Con host, 37, said on Saturday. “They also have wonderful arts and ballet and symphony and stuff. So every year there, so far, I’ve been taking my girls to The Nutcracker.”

She explained that last year’s show was particularly special for her kids because they were able to see her perform for the first time.

“I actually was on stage as Mother Ginger,” she shared. “So all the kids hop out of her [dress] in the ballet, and my girls were like, ‘Mommy, you’re on stage.’ So they saw me on stage for the first time. They’re 5 and 3, so that was really great and makes me want to go back to theater.”

Though Romano began performing at a young age, when it comes to her own children, she told PEOPLE she does not “like to push anything on them” and wants her daughters to “have their childhoods.”

“That’s really important to me and part of the reason why I moved down to Texas to have this space and clarity and peacefulness,” she said. “Austin is a very chill place, so I’m really happy for them. They’re doing really well.”

The Even Stevens star said that parenting during the coronavirus pandemic has been “extremely unique.” She found social media — TikTok, in particular — helpful in navigating motherhood while in quarantine.

“Doing stuff on TikTok, I can really access my fanbase in a unique way and speak to them about being a stressed-out parent during COVID and during quarantine,” she shared, adding that her generation of parents is “super unique, and we’re looking for as much help and sleep as possible, [and] caffeine…!”

The actress, who has previously opened up about her struggles with alcoholism and eating disorders on her YouTube vlog, also told PEOPLE at 90s Con that it was “challenging to be sober during COVID.”

The former Disney star, who also voiced the title character in the early 2000s Disney animated series Kim Possible, said she found that opening up in her vlogs about obstacles like these was “freeing and empowering.”

“I could finally be myself and talk to people about myself authentically, and obviously, being authentic is what everybody wants to see these days,” she concluded. “It’s not only that they want to see it, but that they need it. And so I think it was really reassuring to come out and be like, ‘Hey guys, I’m struggling, I’ve struggled, this was in the past, but here I am now. We’re okay. We’re all okay.’ “