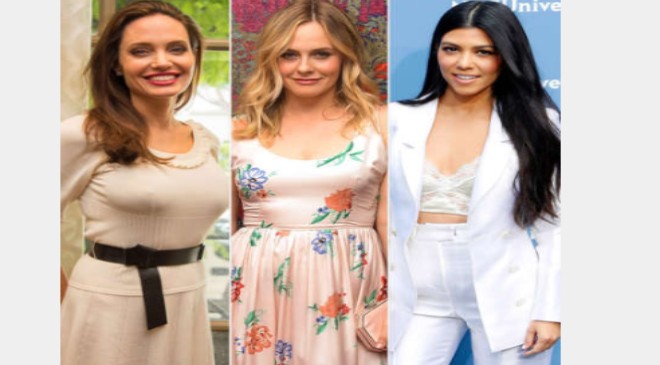 Lights out with their little ones! Kourtney Kardashian and more celebrity moms have raved about co-sleeping with their kids.

The Keeping Up With the Kardashians alum noted in a January 2018 blog post that she and her three kids — Mason, Penelope and Reign — felt like they “all got more sleep” after knocking out together one night.

“I didn’t have to get up out of bed to get the kids back to sleep when they woke up during the night,” the Poosh creator, who shares her brood with ex Scott Disick, wrote at the time. “It was easier when one of the kids woke up, since I was right there. … It’s what worked for all of us to get the most sleep, so I quickly embraced it.”

The Los Angeles native went on to write that the practice helped with mom guilt. “Also, as a working mom, if I didn’t have much time with the kids during the day, at least I knew we’d have the evening together as a family,” the former E! personality explained. “Every kid is different, so if it works for you and your family, that’s the most important thing!”

Leah Messer, for her part, told SheKnows in April 2020 that her daughters, Adalynn and twins Aleeah and Aliannah, “still” slept in her bed.

“I tried a little bit [to transition to their own beds],” the Teen Mom 2 star said at the time. “Addie wants to, but not if her sisters don’t want to. So they all sleep in bed with me. It’s so crazy, Addie [is] right on top of me, and the twins [are] on each side of me until I [can’t] breathe anymore. The other night, Addie tried to sleep in her bed, but it was too hard. Addie will say to her sisters, ‘You guys are old enough to sleep in your own beds now!’ And they just don’t yet.”

The MTV personality will “miss them not sleeping with” her when they go to their own rooms one day, she told the outlet. “If I had a spouse, it would be different, but I don’t, so we all sleep together. … They’re usually sound asleep by 9.”

Click through the photos below to find out why other celebrity moms, including Gwen Stefani, Heidi Klum and Angelina Jolie, all love co-sleeping with their kids

“The girls sleep on the floor of our bedroom,” the actress said during a February 2022 episode of her husband’s “Armchair Expert” podcast, noting that they fall asleep watching How It’s Made.

The Married at First Sight alum exclusively told Us Weekly in December 2021 that her and Doug Hehner’s sex life was “dwindling” with daughter Henley sleeping in their bed. That being said, Otis noted that she was “growing closer” to the little one and “bonding” more with her.

“I sleep with my daughter and then Jionni sleeps with Lorenzo in his bed,” the Jersey Shore: Family Vacation alum exclusively told Us in August 2021, noting that she feels “no shame” over the parenting choice. “[I] still make time for romantic times [with Jionni LaValle]. We’ll text each other and be like, ‘Want to meet me in the guest room?’ It’s kind of cute that we have that, like, all over the house.”

“[My husband, Dean McDermott], was gone for six months filming in another country. … Since he left, they all stayed with me,” the Messyness host told Jeff Lewis in June 2021. “So I currently still have four in the bedroom with me who have yet to go back to their rooms.”

Two months later, Spelling exclusively told Us that she was “encouraging” her kids to sleep in their own rooms. “I think that’ll be helpful with school hours,” she explained in August 2021. “We could still do sleepovers and hang out on the weekends.”

The former Voice coach revealed in 2011 that she was sharing a bed with her then-3-year-old son, Zuma. “I don’t want to look back and say, ‘Oh, my God, I didn’t sleep with Zuma that time because I was too tired,’” Stefani told Stylist. “So I’ll just snuggle up with him tonight.”

Kardashian raved about the practice and how it has worked with her three children Mason, Penelope and Reign. “When I had Mason, co-sleeping just kind of happened naturally,” the reality star wrote on her blog in January 2018.

Back in 2009, the supermodel told German magazine Gala that her daughter Lou was sharing a bed with her and then-husband Seal. “At the moment, Lou needs me enormously. Not only because of breast-feeding but also because she needs to be close to her mother,” she said. “She will sleep now for a year with us in our bedroom, just as her siblings did. It’s easier at night if she is hungry.”

Weekends were all about cuddling at the Jolie-Pitt household. “On Sundays, we have a big family sleep, when the boys get in bed with us and we watch a movie,” the Maleficent actress revealed to Reader’s Digest in 2007. “It started with Mad, then Pax, and now Z is desperate to move into the bed. We’re talking about having to build a bigger bed!” (Jolie and Brad Pitt share Maddox, Pax, Zahara, Shiloh and twins Vivienne and Knox. The former couple, who were together for 12 years, ended their marriage in 2016.)

The rocker, who practices attachment parenting, recommends co-sleeping. “I personally believe that the attachment stage, done well, can circumvent countless addictions later in life because many of these addictions are often a temporary attempt at feeling this sense of of connection,” Morissette wrote on her blog in 2012. The Canada native shares kids, Ever and Onyx, with her husband, Mario “Souleye” Treadway.

“Sharing a bed with baby means you can tune in better to her needs, which in turn builds security and trust,” the Clueless actress wrote in her 2014 book, The Kind Mama. Silverstone and her ex-husband, Christopher Jarecki, coparent their son, Bear Blu.

The Zoolander 2 actress raved in 2015 about co-sleeping with her then-7-year-old daughter, Dashiel, and 1-month-old baby girl, Ever. “I feel that it’s helped us so much to stay connected as a family,” Jovovich told Romy & The Bunnies. “Especially as my husband [Paul W.S Anderson] and I can have such tough work schedules, making films where we’re on set for at least 12 and sometimes 14 hours a day! Because we share sleep at night, our daughter naturally feels very connected to us and that in turn makes her want to please us!”

“Co-sleeping promotes touch and feel (bonding) for mom and baby,” the Sister, Sister alum wrote in a blog for CelebVillage in 2012. “Sleeping with [my son] Cree helped me feel more connected and even created more of a bond.” But Mowry who is married to Cory Hardrict, admitted there was one downside. “No sex!” she shared in the post. “OK. This is a big con.”

The Big Bang Theory actress never owned a crib or a bassinet. “Our family bed consists of two futons on the floor side-by-side: one with black sheets, the other adorned with knights, castles and dragons,” she wrote on a blog post for the Today show in 2011.”We don’t co-sleep, which means sleeping in the same room; we sleep in the same bed. That’s called bed-sharing.”