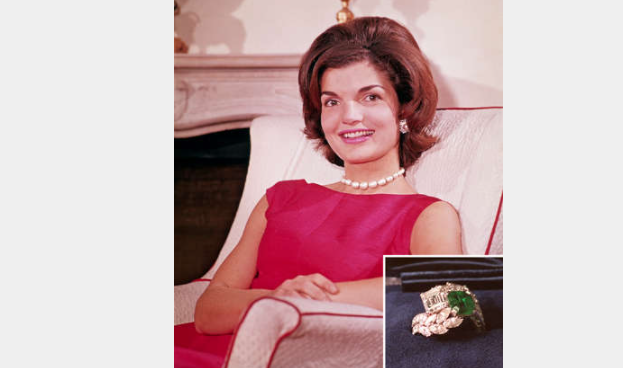 Seventy years before Machine Gun Kelly’s unusual engagement ring for Megan Fox made headlines, John F. Kennedy proposed to Jacqueline Bouvier with a similar sparkler! Ahead of the trend before her time, the future first lady said yes to the interlocking emerald-cut emerald and diamond design – and her beau.

In a romantic nod to her middle name, Rose, Antony Armstrong-Jones presented his princess with a three-ruby ring, flanked by six smaller diamonds – meant to mimic a rosebud, Brides reported.

Whether or not diamonds are a girl’s best friend, the screen siren sure seemed pleased with the eternity band of baguette diamonds she wore as a wedding ring during her marriage to her second husband, Joe DiMaggio.

Though she joked around on I Love Lucy, Ball’s bling was no laughing matter! According to Town & Country, Desi Arnaz upgraded the brass ring from Woolworth’s he gave to his wife when they eloped with an enormous cushion-cut diamond.

Ball was also known to wear an enormous, emerald-cut aquamarine on her left ring finger, rumored to also be from Arnaz.

The sparkling stone matched her light blue eyes, and Nicole Kidman even wore a lookalike while playing the star in the recent biopic Being the Ricardos.

The Rosemary’s Baby star received a nine-carat, pear-shaped sparkler from her first husband, Frank Sinatra, whom she wed in 1966.

The Old Hollywood icon might have gone through a divorce or seven, but this pear-shaped showstopper from one of her husbands is a keeper.

Though Prince Rainier III famously gave the American actress a $4.6 million, 10.47-carat, emerald-cut engagement ring for her to wear in the film High Society, her last movie before they wed, he first presented his bride-to-be with another piece of jewelry.

The royal initially gave Kelly an eternity band with rubies and diamonds – a salute to the colors of the Monaco flag, Brides reported.

Another unforgettable royal ring was the rock King Edward VIII gave to the American divorcée who stole his heart.

The 19.77 carat emerald, encircled by diamonds in a gold setting, was scandalously engraved with the inscription “We are ours now 27 x 36” in honor of their engagement on October 27, 1936 – six weeks before he officially abdicated.

The Academy Award winner was another leading lady with a two-stone ring. Her fourth husband, Pepsi CEO Alfred Steele, wowed her with this unusual double band of baguette diamonds.

Hotelier Conrad Hilton asked Taylor to marry him with a four-carat diamond, and they said “I do” in a 1950 wedding paid for by MGM, Vogue reported.

Diamonds are forever, but the union lasted just eight months.

The Father of the Bride star headed to the altar again in 1952, after actor Michael Wilding popped the question with a megawatt sapphire surrounded by diamonds.

Five years later, the actress looked blissful with producer Mike Todd, with a 29-carat diamond ring on her finger. The couple chatted with reporters before a flight to Mexico City, and Taylor insisted that the square-cut treasure was a “friendship ring.” They would marry later that year.

The Singin’ in the Rain lead was starry-eyed beside Eddie Fisher at their 1954 engagement party, where she flashed her seven-carat, square-cut rock.

All seemed well during their four-year union, which dissolved in 1959 – when Fisher famously had an affair with Taylor, Reynolds’ childhood friend.

The Queen of Diamonds found a lasting love with Richard Burton, whom she met on the set of Cleopatra and left Fisher for.

Here, Taylor shows off her diamond wedding bands from Burton, after they secretly wed in Montreal in 1964 … just 10 days after she divorced Fisher.

Richard Burton purchased this 33.19-carat, flawless gem (then called the Krupp Diamond, now called the Elizabeth Taylor Diamond) for his wife in 1968 — just some of the many jewels he bought for her during their 10-year first marriage and 10-month second marriage.