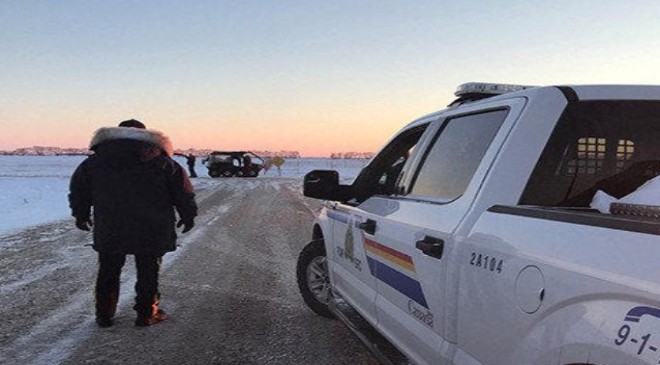 Officials are investigating a possible human smuggling operation after the bodies of four people, including an infant, were found near the Canadian border Wednesday, and a group of five was found walking on the U.S. side.

The tragedy happened amid a blizzard with freezing temperatures.

The four dead were found 6 miles east of the Canadian town of Emerson, which straddles the Minnesota and North Dakota state lines, MacLatchy said.

Their bodies were about 40 feet from the border, she said.

The Royal Canadian Mounted Police said the four — a man, a woman, a male thought to be in his teens, and the infant — appeared to have died of exposure to the cold weather.

U.S. officials said the four are believed to be Indian nationals who were separated during the night from another group of five Indian nationals found walking just south of the Canadian border in Minnesota on Wednesday.

One of the members of the group of five was carrying a backpack with children’s clothes in it, and said it belonged to a family of four who got separated during the night, the U.S. Attorney’s Office for the District of Minnesota said.

That person told police that their group had been walking for 11 hours and expected to be picked up by someone after crossing the border, officials said.

Two people in the group of five had serious injuries and were hospitalized, including a woman who will likely have part of her hand amputated, according to court documents.

The group was found walking in the direction of where Steve Shand, 47, of Florida, had been taken into custody earlier Wednesday morning, federal prosecutors said.

Shand was arrested after the U.S. Border Patrol pulled over the passenger van he was driving near the Canadian border. Also inside the van were two Indian nationals without authorization to be in the U.S. as well as cases of water and snacks, officials said.

Shand is charged with one count related to transporting undocumented people, the U.S. attorney’s office said.

He appeared in a federal court in Minnesota on Thursday and was ordered held pending a detention hearing set for Monday, according to court records. Records do not show that any plea was entered.

Shand declined to speak with police after his arrest, according to an affidavit filed in his criminal case, and a federal public defender listed as representing him did not immediately return a request for comment Thursday night.

“The investigation into the death of the four individuals in Canada is ongoing along with an investigation into a larger human smuggling operation of which Shand is suspected of being a part,” Homeland Security Investigations Special Agent John D. Stanley wrote in the affidavit.

MacLatchy, assistant commissioner with the Royal Canadian Mounted Police, urged people not to try the crossing, or to listen to anyone who promises a safe trip.

“I do understand that for some there may be a great need to get to another country, but this is not the way,” MacLatchy said. “You will be risking your life and the lives of the people you care about if you try it.”